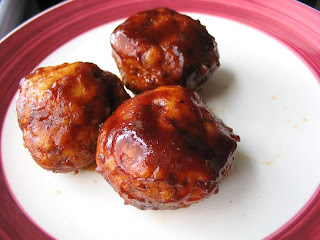 Combine all ingredients well. Form into balls and bake at 425 till browned and mostly cooked through. Heat the barbecue sauce in a pan big enough to hold all the meatballs (preferably the pan you cooked the bacon in, with the bacon fond still in it). Add the meatballs and toss to coat. Let cook till the meatballs are completely cooked and the sauce has caramelized.

The name really says it all, Barbecue Bacon Turkey Balls. I had some ground turkey and bacon that wanted to be used and a bunch of seasonings. So I made these. They were wicked good. Looking back on them, I should have put some onion in. That would have made sense and added more deliciousness. But for some reason I didn't. Anyway, the cilantro is that frozen fresh stuff that I reviewed the other day. It worked quite well, I was very pleased. Sorry, no interesting back story to this one. It was something that I just kinda put together. So, here's what I did. 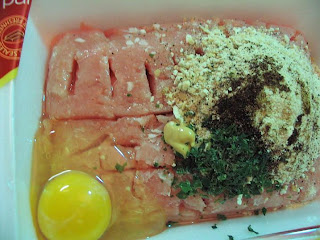 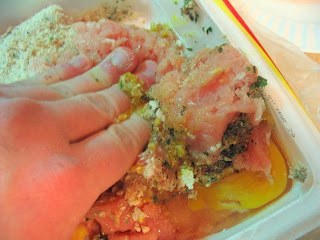 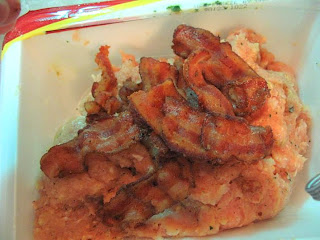 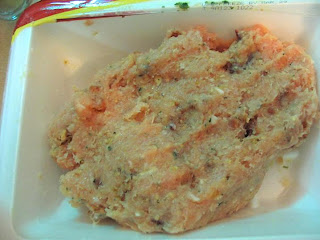 Form them into balls 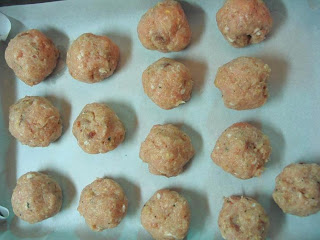 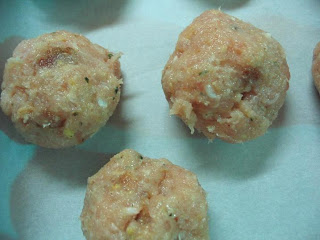 and cook them. I like to do it in the oven, it's quicker than frying them in a pan (at least in my tiny pans) and I run less of a risk of some sticking and making me angry. 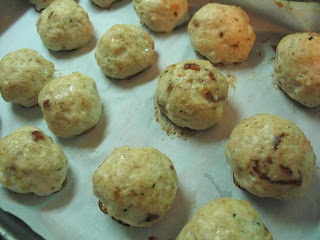 When they were almost done browning I tossed some barbecue sauce into the pan I cooked the bacon in, 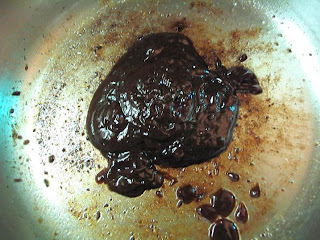 for extra bacon flavor, and turned the heat on medium low. Then out came the meatballs from the oven and into the barbecue sauce. 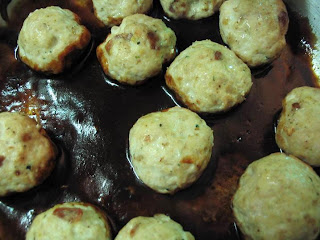 Stir to coat, let cook till done, caramelized and delicious. You can turn the heat up to make it faster if you like, but I don't think I've ever had an overcooked meatball and if you let it take it's time the flavor is much better. 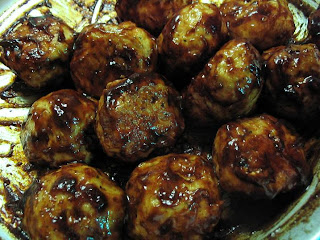 Now you could just eat these as is, they are definitely good on their own. But I tossed mine in a roll with some cheese and it was unreal. 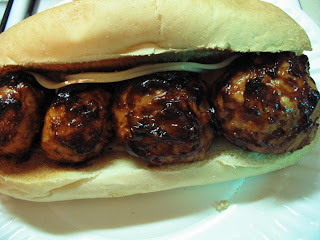 Well, even though these are made with turkey they still aren't exactly healthy. Because of the bacon. But they are wicked good and the more mild taste of the turkey lets the seasonings (and bacon) really come through. I'll be making these again.
Email ThisBlogThis!Share to TwitterShare to FacebookShare to Pinterest
Posted by Bob Labels: bacon, barbecue, experiment, sandwich, turkey at 4/24/2009 12:00:00 AM

I like this idea! Barbecue and bacon - excellent! I wonder if that will work for bison too.

This looks wicked good! Congrats on winning my cookbook at Chef Bliss. :)

now this is a great experiment! bbq & bacon well always work nicely.
I need to use turkey more.

Great idea. They could have been blah but with the bacon in there I bet it was yummy!

oooh, I'm totally going to try these they've got all of my favorite flavors in them. And heck, I say if you're using lean turkey, it's okay to load up on the bacon! Nice recipe.

Danielle: Thanks! Heh, I posted on BS in one of the dinner threads a while ago, I don't know if he saw it.

5 Star Foodie: I bet it would. In fact, I have every expectation that it would... I need to go get some bison.

Gloria Chadwick: Thanks! I'm wicked excited about the cookboook. :)

Dawn: Thanks! Turkey is a good time.

The cilantro and the cumin we wouldn't have thought to even add. Nice pair with bacon though! Dang, this brings on hunger.

I recently experimented with ground turkey to make meatballs and the hubs and I liked them but the kids were not thrilled. I may need to mix it with beef and fool them. These would be awesome for a party, keeping warm in the crockpot. I will file this away for the graduation party after-party (for our friends!)

I'm so immature because the name made me laugh out loud. But I love this idea! Yum!

How creative and talented cook you are. This is really one good original recipe.
Cheers,
elra

These rock!! I bet they are over the top delicious!! I saw a new product on Oprah today and I thought of you. You may have heard of it already. It's called Baconaise-bacon flavored mayo and they have a bacon salt, too. If you do a search you can find it, it's on Amazon.