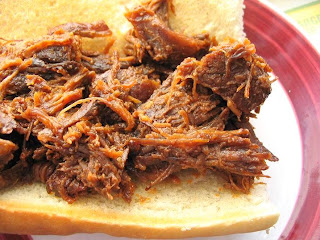 Rub the roast with the liquid smoke. Combine all the other ingredients except ketchup, reserving 1.5 tsps, and rub them evenly over the roast. Wrap the roast loosely (but tightly sealed to keep in the juices) in foil and cook at 275 for 3-4 hours. Remove the beef from the foil, reserving the juices. Pour the juices into a gravy separator and separate out the fat. If there aren't enough juices to come over the spout of the separator, add some water. Pour the juices into a sauce pot that's big enough to hold all the beef. Add the ketchup and reserved spice rub, then reduce the sauce till it's quite thick and the flavors have mingled, stirring occasionally. While the sauce is reducing shred the beef, discarding any fat. Add the shredded beef and mix it to combine. Let it cook over medium-low heat for a couple minutes to heat it through and let the sauce caramelize a bit. Serve hot.

Sorry, I was somewhere else for a minute there. Ok, it's no secret that I love barbecue pulled stuff (it's also no secret that I have no interest in quibbling over the definition of barbecue, so consider this the mandatory "don't waste your breath telling me this isn't REAL barbecue, because I don't give a s#!t" disclaimer.). This particular version isn't that different from my pulled pork, except that it's beef and I rubbed the roast with liquid smoke before the spice rub. And the spice rub is ever so slightly different too, but not that much. No cumin, added onion powder, changed some measurements. That's it really. But the flavor is very different, especially since I used a chuck roast. You could also use a brisket if you wanted, but I had a chuck roast in the freezer. And it worked out really well, so I would probably do it with the chuck again. The strong, beefy flavor wasn't overpowered by all the spices and the big vein of fat kept it nice and moist during the long, slow cooking. Plus all that fat helped it come apart really easily in the end. So, here's what I did.

First I took a big chunk of chuck. 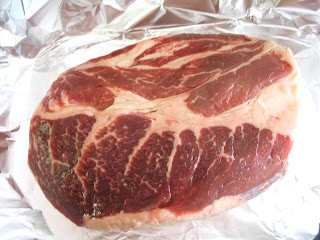 Don't worry, most of that fat is going to be tossed out in the end. Well, what doesn't melt and soak into the meat that is. Which is why it's so damn good. Next I rubbed it with some liquid smoke. 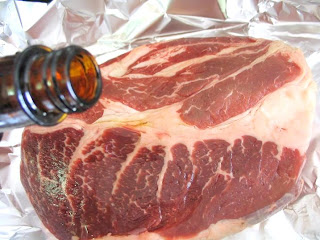 I didn't really measure it, I just used enough to give it a light coating. It gave it a nice, smoky flavor. Then, the spice rub. 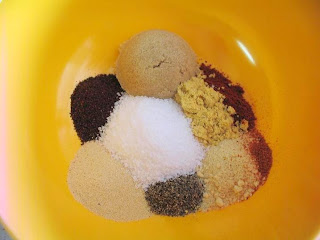 I liked this rub for beef, but I don't think I'd use it on chicken. Leaving out the cumin lets the meat's flavor come through a lot more (cumin being so powerful), which is good when the meat has lots of flavor. When I make pulled chicken it's with boneless, skinless breasts, so all the flavor is coming from the rub. Anyway, rub the rub, 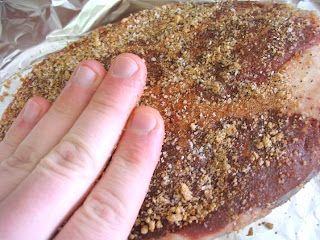 but keep one and a half teaspoons of it aside for the sauce. Don't be shy with it, there's a lot of meat there. 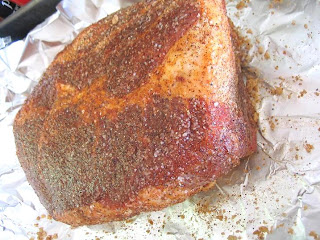 Then wrap it loosely in foil (but seal it tightly, you don't want the juices escaping), put it in a rimmed baking dish, just in case (I used a jelly roll pan), and into the oven for three or four hours. I think I had it in for three and a half. You'd think after all this time I'd start paying more attention to times, since I almost always say something like "I wasn't paying attention, so I don't know how long it was in for" with recipes like this. But I don't. Ah well. When it's done, take it out and plop it into a large bowl. 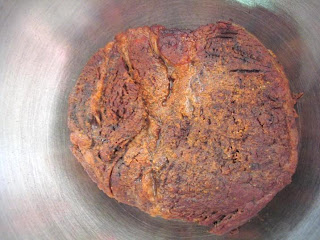 It's not very pretty, but man does it smell good. Let it cool a bit before you shred it. This gives you time to deal with the juices. 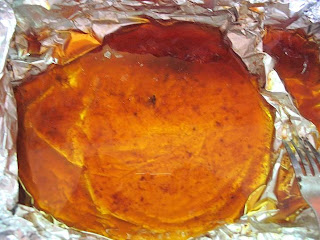 Mmmm, beefy. There's a lot of fat in there. You want that gone. I use a gravy separator, but I didn't get a good picture of it. I also added some water to bring the juices above the little spout hole thingy. The water didn't affect the flavor since I reduced it a lot. Which is the next thing, pour the juices into a sauce pot and reduce them a bit. 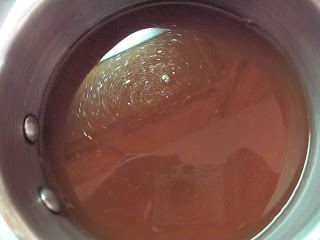 Then add the reserved spice rub and the ketchup. 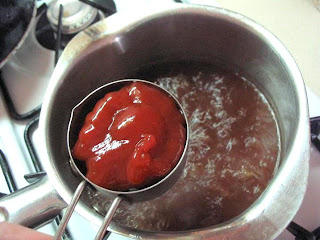 You could easily use pureed tomatoes or canned plain tomato sauce in this, but I didn't feel like opening up a can to use half of it. Now let it simmer to reduce to a thick sauce and to let the flavors mingle. I've always been amused by that phrase "let the flavors mingle". I picture tiny cocktail parties, jars of spices in wee dresses and suits, drinking little martinis, spreading gossip.

"Did you hear? Cilantro and Cumin are breaking up!"
"Oh no! What will happen to their baby, Adobo?"
"I hear she's going to live with her Uncle Coriander down in Arizona."

Am I the only one? I am? Ok, well, we'll pretend that never happened then. So, while the sauce is reducing, shred the beef. 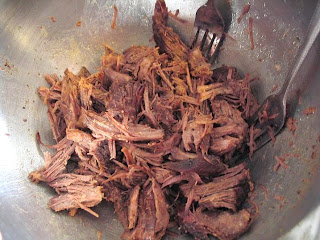 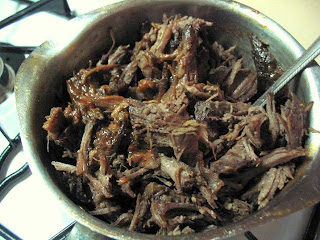 and stir it up. Let it cook for a bit so the meat absorbs some of the sauce and it caramelizes just a bit. Then that's it. Except for taking blurry pictures. 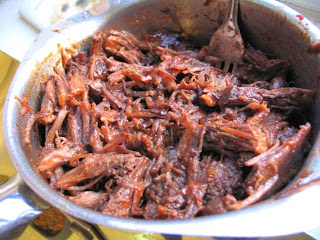 Toss it on a roll 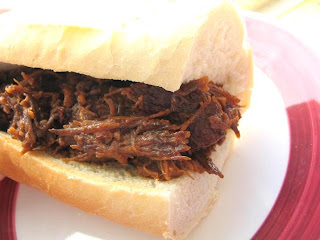 (or some fresh french bread, if you happen to have some) and mow. 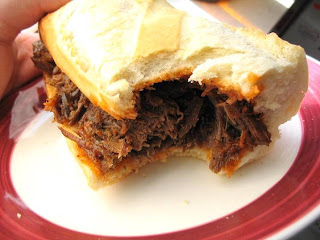 This is a seriously beefy, tasty, filling sandwich.
Email ThisBlogThis!Share to TwitterShare to FacebookShare to Pinterest
Posted by Bob Labels: barbecue, beef, main dish, sandwich at 4/20/2009 12:00:00 AM

I so have to stop looking at your blog in the middle of the night because I end up starving and cranky that I can't make it right this minute!

Dude, I can't find lamb at my supermarket, you expect me to find emu? Not happening. And my spices don't talk-I talk to them, but so far they haven't answered. Poor Adobo, it is always the kids that suffer.

I suck at cooking times too - 1hr? 3hrs? Who knows, cook it til it's done. People probably hate us :)

I loooove barbecue beef. I'll have to try this recipe!

I like the way I can see you taking a picture of the juices in the reflection. This looks really good, especially on that nice french bread

This is the perfect dish for a summer bbq! I am really looking forward to the summer and trying this recipe!

Love the flavors going on here! This is one of the tastiest ways to enjoy beef in a sandwich, yum!

That looks delicious. I mean wow and I love liquid smoke it always adds the right something-something.

with your creative brain, I highly doubt you'll ever lose your creativity. Please!
So we could pile some of the bbq beef on top of that insanely delish hot you just made a few days ago right? Oh yeah!

I just ate lunch and this post still made me hungry :)

Umm BBQ is whatever it means to you. This looks like it counts! It's sweet, spicy, smokey. And it's undoubtedly yummy.

tamilyn: Heh, that's the goal. ;) I don't think I have emu at my local store either, but I saw ostrich once.

Vicki: Lol, at least when we try to give them recipes. :)

Karly: Let me know how it turns out for you!

mag: Thanks! I don't have a crock pot that is large enough to.. well, to do anything much with. Plus I was trying less to braise it than to kind of dry cook it. But a crock pot would work fine, I'm sure.

Karen: Heh, I had to make sure you couldn't see my face before I published that pic. That bread was hot when my girlfriend bought it too, it was awesome.

Michele: Thanks! Let me know how you like it when you do.

noble pig: Thanks! Yeah, I'm a big fan of liquid smoke, especially since I can't grill to get a real smoke flavor.

Dawn: Heh, I hope not. :) Yeah, some of the pulled beef on a fresh piece of flatbread would be awesome.

duo: That's what I say, but some people get really uptight about it.

This sure looks good, but what exactly is liquid smoke--it scares me.

Wow Bob that is some awesome looking sandwich. I bet I could devour one! They look amazing! The rub sounds perfect!

Wow, I never made this, and now I am so tempted after seeing your post.
Cheers,
elra

Hey thanks for the article. I used it and I sent it to a friend of mine. You should look at posting it on Wacanai.com(http://www.wacanai.com/intro). You can put your articles there, do searches, and it links it to other similar articles. You can link it to your page and it has graphs to show you how many people are reading your stuff and if they are finding it useful.

You should make these and top them with slaw!

Liquid smoke? I've never heard of that before. The cut of meat you used looks very nice... almost too nice for this.

One problem I've had with pulled beef is it becoming overly dry. You ever see Christmas Vacation? You know the Turkey scene? Yea, that dry....

Any suggestions on how to get around that?

Hi bob-thanks for giving me this sunday's dinner. We are having 2 bday parties this weekend and by sunay night, I am not 'cooking' for anyone. I will drop this bad boy in early, toss some rolls at family and tell them to go for it. ;)

BBQ anything is tops with me but this pulled beef sandwich is particularly delicious-looking! I am so ready to go on a picnic!

This chuck roast recipe made me drool when I first saw it here. I studied the recipe and it only took me short time to master it and I did it.