Typically when I've made a recipe and I decide it needs some kind of retooling I don't try it again for some time. Sometimes I need to do some research or I have a bunch of other stuff to make, sometimes I don't want to eat it again too soon or I just don't want to deal with whatever it needs. But I remade that apple upside down cake a bit more quickly than normal. And I learned a valuable lesson, too. Namely, bundt pans aren't very good for making upside down cake in. My dreams of fluted, caramel covered cake are simply not meant to be. Well, at least not in this format. Maybe some kind of sauce... Anyway, I made it again pretty quickly because it tasted wicked good. This time it was even better, thanks to a few changes. Namely not halving the cake part of the recipe and adding toasted pecans and raspberries. I'm not going to go over each step again, since it wasn't so long ago that I made the original. But I will show what I did differently. 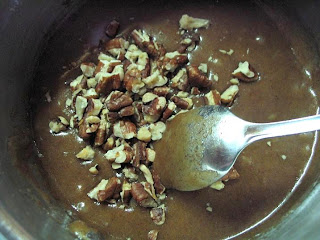 Right in the caramel. This added a great flavor/texture. They were salted, which worked out nicely. I did the apples the same, trusting the extra batter to cover/ hold them in place. But, after adding half the batter I added a layer of fresh raspberries. 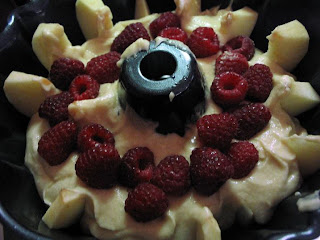 Not squished or anything, just whole. I still halved the caramel portion, figuring there would be plenty since there was so much less top to a bundt cake than a regular cake. And there was plenty of caramel... sort of. Using the whole recipe meant leaving the cake in the oven much longer which browned it up nicely. 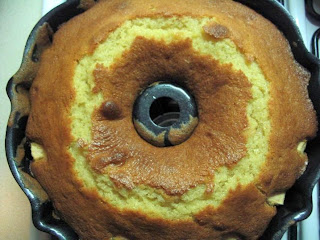 Added some flavor depth. It still didn't cover the apples quite all the way, but at least it didn't split into pieces when I got it out. Which was a hassle since this time the caramel stuck even more, making the cake, once again, ugly. 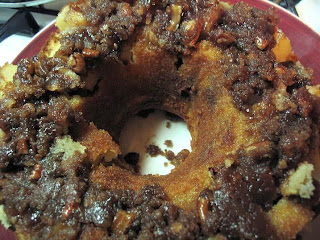 I wound up peeling the caramel off the bottom of the pan and kind of patting it onto the cake. But it was worth it, for this. 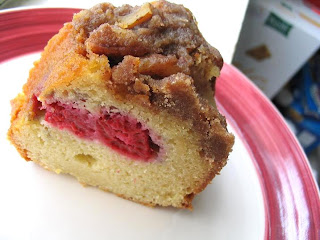 This was wicked good. I'm going to be working on this recipe, we'll see what happens. The pecans and berries were a great addition, but I might try it with mixed berries next time. I bet bananas and walnuts would be good. Or vanilla in the caramel and chocolate chips in the cake...
Email ThisBlogThis!Share to TwitterShare to FacebookShare to Pinterest
Posted by Bob Labels: baked goods, breakfast, cake, fruit, updated post at 4/22/2009 12:00:00 AM

Are you trying to kill me, Bob. I love it!

Another apple cake.. it looks good, not ugly!! Yum!

This looks absolutely scrumptious. I love the addition of pecans (cannot go wrong there) and the berries. Walnuts and chocolates....bananas... mixed berries - they would all work.

Oh wow this sounds stunning. I would have peeled the caramel too.

no kidding, I did not think you'd try it again, but hey it did come out better.
I love the middle. Now I want to make a caramel, pineapple upside down cake, thanks!

You are so my hero for retrying this recipe. I loved it the first time around and this looks even better. Awesome job, Bob!

That addition in the middle rocks! I don't find it ugly looking at all, in fact just the opposite! I could go for a piece or two-right now!!!!!!

Danielle: If you do, let me know how it turns out!

Dawn: Heh, it did come out better. I'm going to be making a standard pineapple one soon, my girlfriend mother requested it.

Donna: Thanks! I've never been a hero before. Heh.

Reeni: Thanks! The raspberries are really what pushed it over the edge.

You're smart for switching the game up like this on the 2nd round at the rodeo. Also...the berries...NICE! That little red layer is a good touch.

What a delicious looking cake. Couldn't be better than this.
Cheers,
elra

Love the raspberries in this. This might work better in a straight-sided tube pan that doesn't have the fluted edges - ?

It is always fun to have a project to work on in the kitchen! This is great! Can't wait to see how you improve it further yet - is it even possible!?

Looks amazing, what a construction! Plus you deserve many gold stars for perseverance!

This looks so scrumptious!! I love cake, upside down or not, but this is awesome!! I also have a prize for you today!!

The slice looks awesome! I love the addition of raspberries. At this rate, you will end up creating one of the most spectacular cakes ever!

Duo: Thanks! The berries were my favorite addition to this cake. Keeps it moist too.

from my motorhome: Thanks for stopping by. :)

Elra: Heh, thanks. But I bet it can, next time I'm doing something with chocolate.

Karen: I'm guessing it would, but I think I'm just going to switch to a cake pan.

Yesica: Thanks! I haven't gotten a gold start in years.

Tangled: Thanks! Heh, we'll see how spectacular it gets...

unconfidentialcook: I guess it's not ugly ugly, just not what I was going for. So ugly isn't really the right term, more disappointing. And only in appearance, flavor wise it's awesome.

I just wanted to let you know that I love your blog. You have some of the best recipes. Bravo. I will come back serveral times.

Meg: Well, thanks! I look forward to seeing you several times. ;)