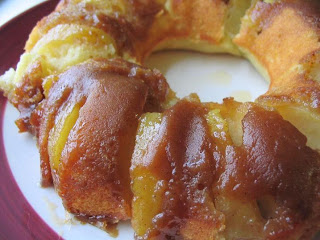 Preheat oven to 350. Butter a deep 9" cake pan. In a sauce pan melt 4 tbls of butter and the brown sugar. Cook until the mixture bubbles, then take it off the heat. Add the cinnamon and a pinch of salt, then stir. Pour into the bottom of the prepared pan. Whisk together the flour, baking powder and a 1/4 tsp of salt and set aside. Cream together the remaining butter and the granulated sugar. Add the eggs, one at a time, mixing till combined. Mix in the vanilla. Add the flour in 3 parts, alternating with the buttermilk. Drop the batter by the spoonful into the prepared pan. Don't worry if it's uneven, it will work itself out. Bake until golden and the cake springs bake when lightly touched, about 35 minutes. Let the cake cool on a wire rack for about 5 minutes then flip the pan onto a plate. Let it sit for a minute then remove the pan. Serve warm or room temp.

So this recipe is adapted from... er... well, I have to give proper credit. It's just how I roll. But I have a feeling this is going to open up a can of worms that I'm going to prefer I didn't. It's from Rachel Ray. I don't like Rachel Ray. If you do, that's fine, I'm not trying to get her taken off the air or anything. I'm just not a fan. For one, when she smiles she looks like Jack Nicholson's Joker in the first Batman movie. And I loved that movie, but I don't want the person preparing my food to remind me of a psychotic mass murderer. Call me nuts. And for the rest... well, she just bugs me. I'm sure she's a wonderful person in real life, who loves her family, is kind to animals and such, but I just don't want to watch her do stuff. She rubs me the wrong way. I'm not exactly sure why, I think it might be all the giggling. But this cake almost makes me a fan. Of her recipes, if not the rest. It's fantastic. And I didn't even do all the fancy pants crap she did with it, like use cardamom and hazelnuts. I'm sure they would have been lovely in it, but I didn't have them. And don't let my pictures turn you off either, my cake turned out fairly ugly, but it tasted wicked, wicked good. I'm going to be doing another version soon and I know what to fix. And if it turns out ugly again, I'll name it "Ugly Cake" and if people don't want to eat it, well, that's more for me. So, let's do this thing.

First off, I cut the recipe in half. I got a small bundt pan for Christmas that I've been dying to use and I thought this would be a great thing for it. Turns out it might not have been. But the final verdict won't be given till I try it again. Which will be soon, I promise. And it will have raspberries. But that's neither here nor there. So, first we make the caramel. Butter and brown sugar in a pot. 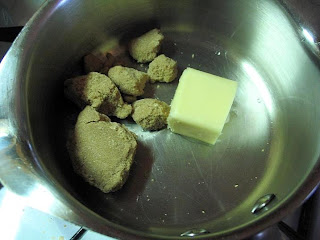 Gotta love a recipe that starts off like that. Melt and mix. 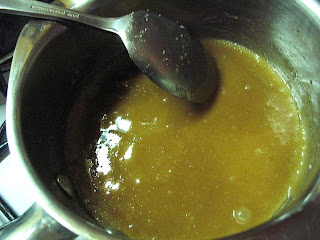 Add cinnamon and a pinch of salt. 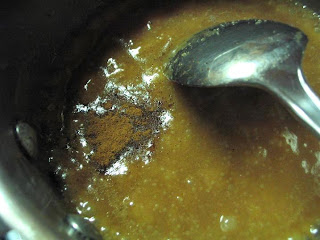 More stirring. Next time I make this I think I might simmer it a bit more to help the sugar dissolve. I like a smoother topping, this was a little grainy. But still delicious. Then I creamed the butter and granulated sugar. 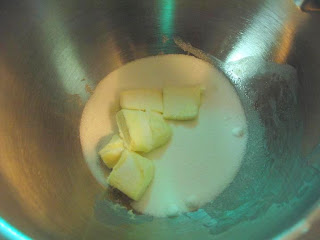 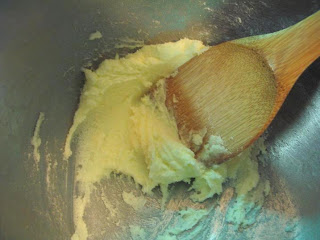 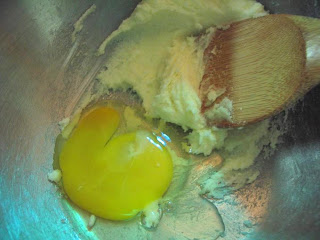 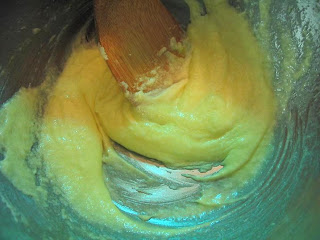 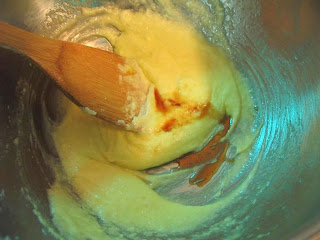 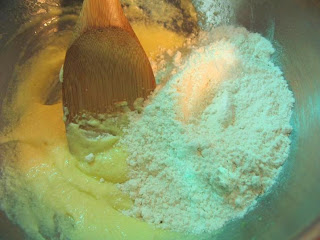 The recipe says alternate the flour and buttermilk, 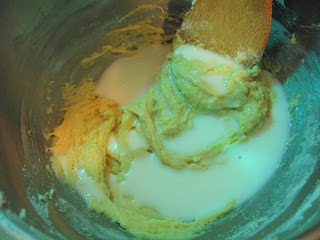 but since I cut the recipe in half I didn't bother. 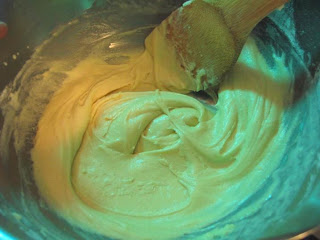 It worked out just fine. Now, c'mon. Even the batter looks good. Look at that! Don't you just want a spoonful? Next I poured the caramel into the bundt pan 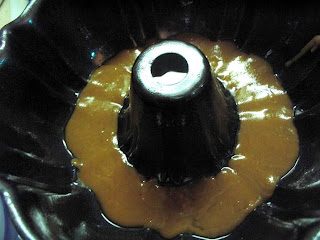 and added the sliced apples. 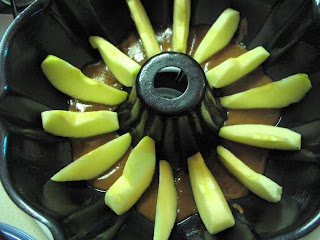 This was why I wanted to use the bundt pan, I thought this would be a neat effect. It didn't really work out, as you saw, but I have high hopes for next time. Next time I'm not cutting the recipe in half. Anyway, I spooned the batter in. 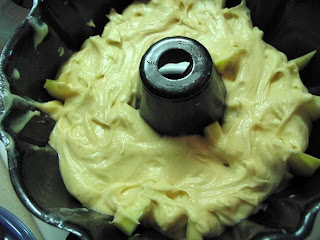 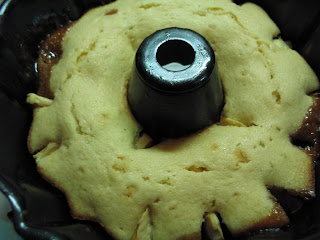 and the caramel bubbled up around the edges? 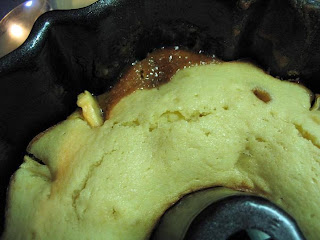 That's what I'm hoping to fix. Next time. But this time, it was just flip, sit 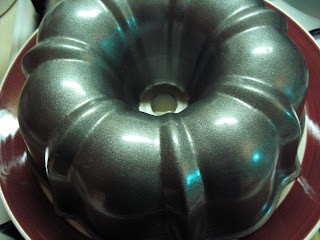 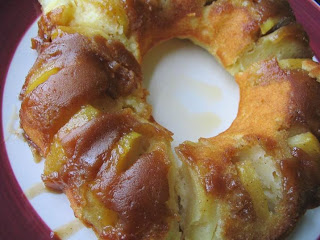 But looks can be deceiving and this is a case in point. Moist, rich and spectacular. This was a great tasting cake. Frankly, it didn't last the night. Good thing it was a half recipe...
Email ThisBlogThis!Share to TwitterShare to FacebookShare to Pinterest
Posted by Bob Labels: baked goods, dessert, fail, fruit at 4/17/2009 12:00:00 AM

I think it looks just fine, Bob. I bet it tasted delicious, whatever has apples in it can't be a fail. I have a different recipe for an upside down apple cake, that was my mother's battle horse, and it never failed making people go "Wow".

I think it looks delicious and I love those apples!

I think it looks terrific, and its not because I like you.. it looks just fine. I admit I like RR, she has put quite a few tasty , quick meals on my tables , with veggies, that my kids will eat so she is ok in my book. Sounds yummy also!

I'm a litte scared by RR too. She is over-the-top at times and needs a chill pill. Some of her recipes are good though. Emeril and Ina are my true cooking chef loves. I wonder if this recipe would have done better in a cake pan? Well at least it tasted decent.
Have a good weekend!

Awww, your apple up side down looks irresistible! What an idea!
Cheers,
elra

I have no problem eating ugly cake! I'm a little piglet like that. If it tastes good I'm all over it!! I was wondering when you were going to put your bundt pan to work. Caramel + apples = super yummy!! R.Ray gets on my nerves too, it's that giggling and the trucker voice, ewww.

Your cake can go next to my ugly strawberry pie on the table at the next county fair!LOL I know they see we eat with our eyes first but from experience, I think smell and taste trump looks any day!! Besides, upside down cakes are rarely "pretty" but you KNOW they are awesome!! Good job dude!

Oh...and RR bugs me too. I think her giggles are forced. But I'll watch her once in a while cuz sometimes she has good tips.

But did it taste good? That's the question. If it did, looks don't matter!

Dajana: Heh, thanks. Are you going to be posting about your mothers cake?

Dawn: It might have done better in a cake pan, but I really wanted to use the baby-bundt. I'm going to try it once more in the bundt and if it doesn't work again I'm going to just say screw it.

Reeni: Me too. Heh, now I have a horrible image of giggling truck drivers stuck in my head...

Danielle: Thanks! Your pie wasn't that bad, my pies are way worse. They look like pastry school project failures.

duo: Yes. Yes it did. And it was the most important thing. :)

That sounds pretty good, even for a latent apple liking person...I don't mind RR, but I would prefer getting her tips and recipes via her magazine than her show(s). But still, she does have decent recipes.

I can't stand Rachel Ray either.. I never noticed how much she resembled Joker from batman. That cake looks really good. I'm so glad you made this because I always wanted to make an upside down fruit-type cake, but I don't have a tube pan. I didn't think the bundt would work, but it does!

'Ugly' wasn't the first thing that came to mind when I saw the first pic. It was 'This would be great with some vanilla ice cream!' Oooo - I can almost taste it!

Bob, it looks mighty darn tasty to me... when I make Pineapple, a piece always sticks to the bottom of the pan, it never fails... It's just in their nature.. :)

Whenever my cakes stick to the pan and fall apart, my husband refers to them as "Ghetto Cake", spoons some into a bowl, puts Hershey's syrup on it, heats it in the microwave, and enjoys it anyways. He's a very supportive man, my husband.

p.s.
I like that show "Everyday Italian" with Giada De Laurentis. She's softspokes and cute.

I can take or leave Rachael. Sometimes she gets on my nerves. I thought her show had some great ideas, but I got a review copy of her Big Orange book and it was a pain in the ass - huge lists of ingredients in her recipes, long recipes, overly complicated recipes...It just wasn't worth it.

Ugly always tastes good. Now as far as Rachael...I'll take her dang job anyday and I'll even giggle and snort if they want me too. I have no shame.

I don't know Bob, that cake looks pretty darn yummy!! I can't wait to make this for my husband, O.K. and me. Thanks!!!

Dude, Rachael doesn't bake. Was this in a cookbook of hers? I know the new one I just got has some of her Mom and MIL recipes in it, but this didn't look familiar

Bob, I have my mom's Apple and Walnut upside-down cake recipe posted over on Bakespace, if you're interested.