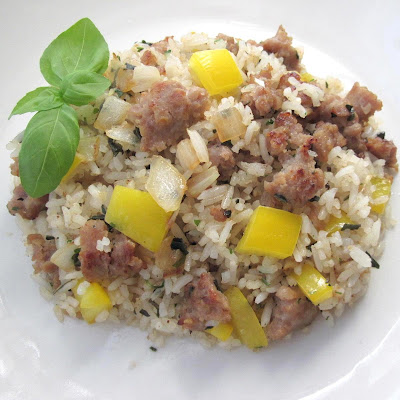 Heat up a nonstick wok, stir fry pan or saute pan over medium/medium-high heat. Brown the sausage breaking it up into small pieces as you do. Once it's cooked transfer it to a paper towel lined plate, leaving a little of the fat in the pan. Add the onions and cook them until slightly soft and browned. Add the garlic and ginger and cook until fragrant, about 30-40 seconds. Add the peppers and cook them until they are as soft as you like. Transfer the vegetables to the same plate as the sausage. Add about a tablespoon of olive oil to the pan, let it get hot and add the rice. Stir it around to coat it with the oil and then let it sit for a minute to get crispy. Stir and repeat until it's as crispy as you want. Add the oregano, parsley, basil, parmesan, red pepper flakes and salt and pepper to taste. Mix it to combine then add the vegetables and sausage. Mix it up again and let it cook for a little bit to make sure every thing is hot.

When I made the garlic pan fried noodles last week there was quite a bit of interest in some Italian/Asian fusion. Sure, a lot of the interest was from me, but that's fine. I'm going to explore the idea anyway. Heh. We got some Chinese take-out the other day and ordered extra rice so I would have some leftovers to play with. I decided to Italian it up, see how it went. It went quite well. Quite well, indeed. I basically just used an asian method of using leftover rice with Italian style stuff. Like standard fried rice you could use anything you want, really. It's like stew or casserole, clean out the fridge.

First, I cooked up a couple Italian sausages. 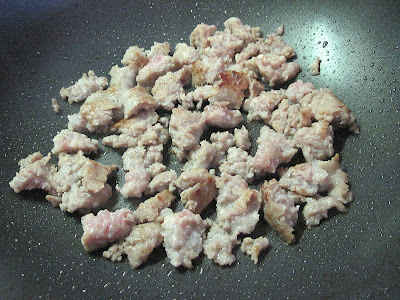 I like nonstick for making fried rice. You don't get quite as good a texture but you don't have to use anywhere near so much oil, making it less heavy. Once the sausage was browned, cooked through and broken up I moved it to a paper towel lined plate. I left about a half a tablespoon of fat in the pan to cook the vegetables in. Which is what I did next. First the onions, 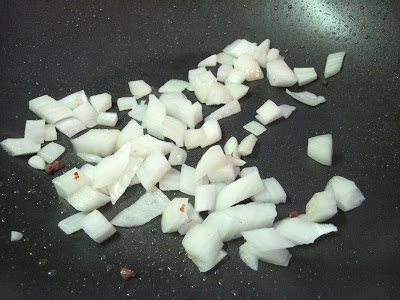 then I added the garlic and ginger, 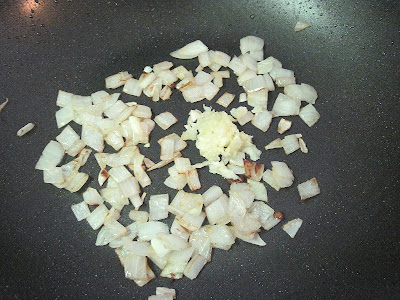 then finally the peppers. 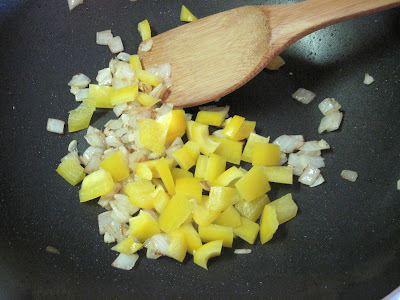 I just heated the peppers through, pretty much, since I don't like squishy peppers. I moved the veggies to the plate with the sausage and heated up some olive oil in the pan. You want to use just enough to lightly coat the rice, but not so much that it gets all oily. I used about a tablespoon, I think. Maybe a little less. Should have measured it, sorry about that. Then I tossed the rice in there and stirred it to coat everything. 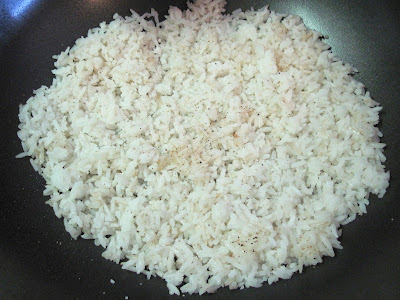 I let it sit for a minute, then stirred it and let it sit again. I did that a couple times until there was some browning on the rice. I know you can't see it, but I assure you there was some. Then I added the sausage and veggies back in, 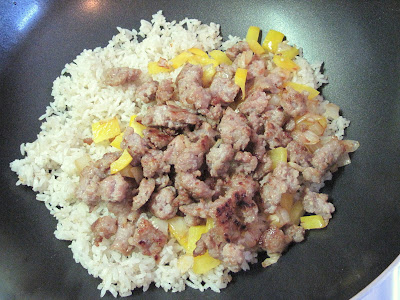 as well as the herbs and cheese. 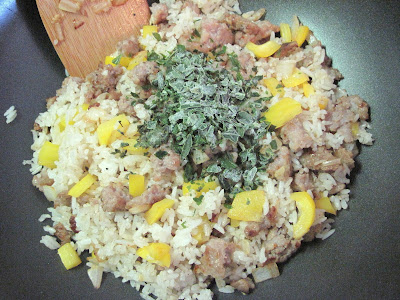 Stirred it around to combine and make sure everything was hot and that's it. 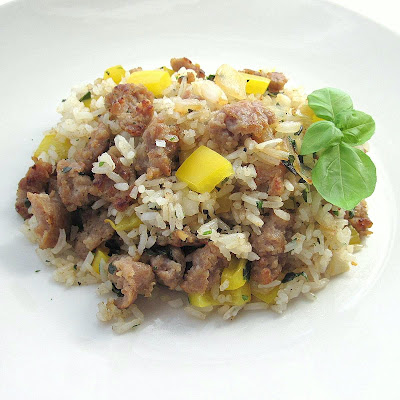 Italian fried rice. It was wicked good. Next time I will be making some changes, of course. I liked the ginger in there, it added some nice flavor, I might add a little more. But I'm not sure, I don't want it to become overpowering. A splash of white wine would have been good, so would some tomatoes somewhere in there. I was thinking maybe a little balsamic vinegar, maybe some broccoli and chopped spinach. Chopped prosciutto or salami would be good too, I expect. Maybe some of those pickled hot peppers whose name I can't remember. What do you kids think, what else would be good in Italian fried rice?
Email ThisBlogThis!Share to TwitterShare to FacebookShare to Pinterest
Posted by Bob Labels: asian-esque, italian-esque, rice, sausage at 10/26/2009 12:51:00 PM

Bet the ginger was nice with the Italian sausage. That's an interesting pair. Very nice!

That looks pretty darn tasty. Tomatoes sound good, but I wonder if they'd make the rice soggy? Prosciutto would definitely be nice. Maybe some mushrooms too.

Wow this is such a neat idea! I'm sure it's delicious - I want to try it soon! I'm wondering what Marsala wine would be like in it - especially since one of my fav Italian dinners is sausage and peppers with Marsala wine (a Giada recipe) . . .

I'm a vegetarian but man does this look delicious!!

Duo: It was a good combo, I wish I had done it earlier. Thanks!

Palidor: That was one of my concerns, I was thinking of seeding/cubing some and using it as a topping at the end. I'm sure mushrooms would be good, for those who like them. ;)

Meghan: Thanks! Hm, I bet Marsala would be quite good.

EtsyFoodSnob: Thanks, I'm sure there is a veggie product that uses Italian sausage seasonings...

Nice twist on the rice Bob! Thinking outside the box gets you a tasty treat:)

This is an absolutely great idea! I think I told you about the Chinese fried rice I make all the time with TJ's frozen brown rice (we never have leftover rice)--this will be a great change of pace.

Awesome use of leftovers. Gotta love fusion cooking, right? I made some fried rice to the other day. It's a fried rice kind of weather over here.

What a great combo! I love fried rice and this looks like the best combo EVER!

Wow, very creative! Love everything about this!

I never thought of making an italian fried rice. I bet some zucchini would be good in there...and some parm cheese on top to garnish?

Great idea to fuse fried rice with other cultures!

This looks perfect as is... Not a big fan of tomatoes in rice, so i would skip that, but balsamic in rice is wonderful... would try that for sure.

What a neat twist on fried rice! Love the Italian flavors here!

I like the prosciutto idea. Sun-dried tomatoes would be good, so would roasted red peppers. I love how you garnish with that small sprig of basil!

I absolutely love this! I know what I'm making next time I have leftover rice! I think eggplant would be good in it.

Yup! I love me Italian. I married one. I love trans cultural meals!

Year on the Grill: Yeah, balsamic is something I'm definitely going to try.

K, I'm voting for balsamic AND sun dried tomatoes AND some shaved parm! The color would be awesome in there as well. YUM!

A gallon of POM WONDERFUL...

Contact me with an address so I can let the good folks know where to send it.

I bet it smell superb...from the combination! Great job!
cheers!!

Something new and delicious dish to try.

It might not be Italian, but I love adding pineapple to my fried rice. It's part of the sweet and savoury combination I love so much!

I absolutely love this concept, and the additionof ginger with the sausage, brilliant!! Nicely done.

This sounds so god to me, wish I was having it for dee-ner!

What a great and delicious sounding idea. I'll give this a try. Thanks for the post.