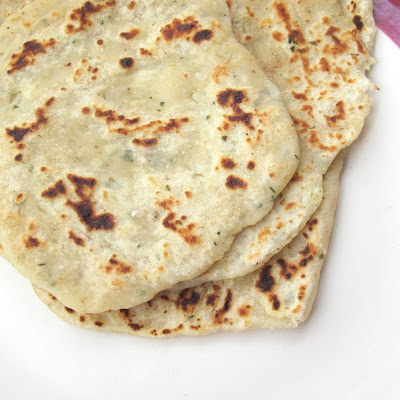 Mash the potato well with a fork. Add salt, pepper, cilantro and sugar, mix well. Add the flour and water and mix until the dough forms a ball (it'll be pretty sticky). Heat a griddle to medium heat. Pinch off 1/4 cup balls of dough and roll it out about 1/4" thick on a well floured surface. Brush one side with melted butter and place it, buttered side down, on the griddle. Brush the other side with butter. Once it's browned on one side (about a minute) flip it and brown it on the other side (about another minute).

*Atta is the authentic choice, but whole wheat is fine if you have it. I used plain, white, AP flour and they came out delicious.

I've been on a quest for the perfect, easy and most important, quick flat bread. Something I can whip up on a moments notice whenever flat bread is desired. With this recipe I am one big step closer to my goal. I made quick flat bread once before and wasn't too thrilled with the results. The recipe had baking powder and baking soda in it and it gave it a pancakey taste that didn't do it for me. But this one, man, this one was awesome. The texture was great, a bit chewy, which I like and the flavor was wicked good. I did bland the recipe down a bit from the original since I didn't want it too... ok, I just don't really like Indian food. It's too heavily spiced for me. It's not the heat of it that get's me (I like spicy), it just all seems far too seasoned. So if you like Indian food you might want to try the original, but if you don't then this version is probably more up your alley. I'm not done tweeking this recipe yet and eventually I want to make one that doesn't use potato so it's even faster. But in the meantime I'll be making these over and over. What's that? You want step by step instructions with pictures? Well, sure!

First, mash up a half cup of potato. 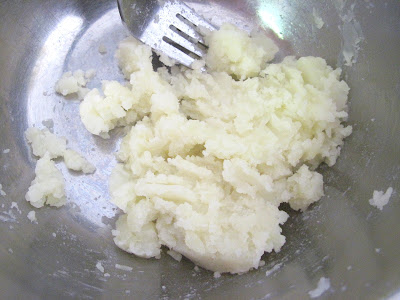 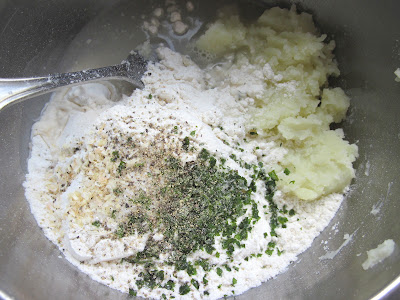 and mixed it up. 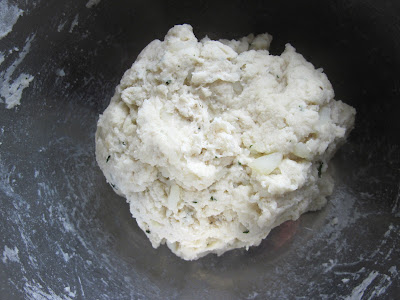 One thing I liked about this recipe is there is no kneading (even though I do enjoy kneading) and no resting. Cooking the potato is the longest part of the prep, if you happen to have a leftover baked potato then it would be even faster. Now you just take quarter cup chunks of dough and roll them out. 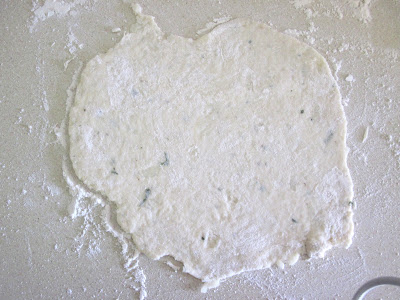 Brush one side with butter. 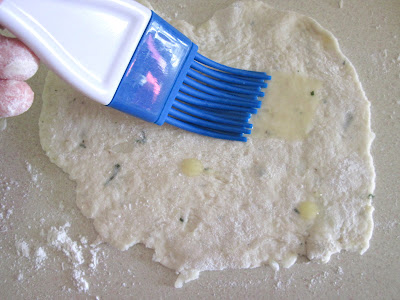 And now I'm afraid I'm going to ramble for a bit, bear with me please (or go ahead and skip down to the next picture, that's when the action picks up again). During the course of my reading about paratha I found that some people insist (in a couple cases quite, er, insistently) that you not brush butter on them when they are uncooked. Often this meant flipping the bread four or more times in the pan, once per side unbuttered and once per side buttered. I couldn't do that, I have a phobia of stuff sticking. I could have used my anodized aluminum pan (most of these folks were using cast iron), but I really wanted good browning. While the anodized aluminum browns a lot better than nonstick, it still isn't half as good as steel.

So I buttered it first. I don't know what the difference is, since I haven't tried it the other way yet, but it seemed that the sites who said to start it unbuttered were the more authentic ones. You know, the ones made by Indians instead of white dudes like me and the guy I got this recipe from. At some point I'm going to be brave and make them the other way. When I do I'll do an update post to let you kids know how it goes.

This is also the simplest method I found, there are a lot that are stuffed or twisted or layered and they look like a good time, too. But, back to the ones I actually did make. Butter side down in the hot pan. 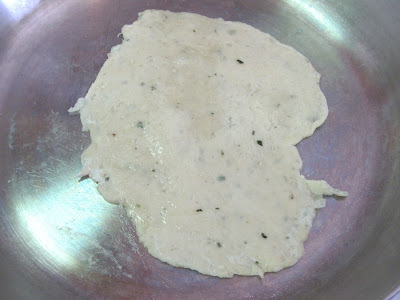 More butter on the other side (but no picture), cook it for a minute or so and then flippsies. 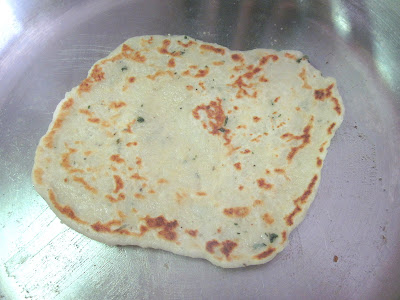 Cook it until it's brown on that side (about another minute) and that's it. Eat as soon as it's cool enough to not do you too much harm. They're best as fresh as possible, but they reheat well too. Just gently wrap them in foil and toss them in a 350 degree oven for a minute or so and it's all set. The texture of these was great. 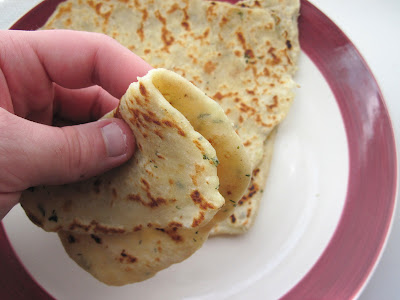 Flexible and ... toothsome? Chewy isn't really the right word, but they weren't exactly tender, either. You knew you were chewing them, but it wasn't difficult. I wrapped one around some spinach and carrots with a little spicy mustard. 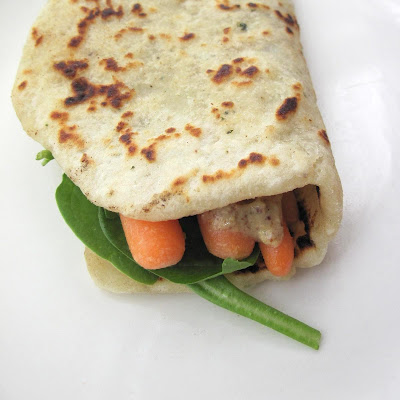 Hey, it's what I had on hand and it was good. Next time I'm going to use caramelized onion in them, instead of dried, I think that will be bad ass. They would be awesome for scooping up a nice thick stew too.

So, most of the people I know either love or hate Indian food. I like the breads, but not anything else, really. Heh, fortunately my girlfriend doesn't like it either, otherwise there would certainly be drama. Naan is the bomb though and I'm definitely a convert on paratha. Where do you folks stand?
Email ThisBlogThis!Share to TwitterShare to FacebookShare to Pinterest
Posted by Bob Labels: asian-esque, bread, potato, vegetarian at 10/09/2009 09:13:00 AM

I have several bread cookbooks, and I'd love to try flat breads, but for some reason, I keep making my old standard regular breads. Perhaps you will inspire me to be adventurous and try flat breads...I'll keep you posted! Thanks! Nice photos, btw.

I'm not sure I'll ever learn the differences between naan, parathas, roti, etc. They all taste good to me.

I love Indian food, especially the breads. I think you were wise to butter, using a s/s pan. The plain would only work on a well seasoned cast iron, which is embedded with oils anyway.
I am fortunate that my husband and daughter both love Indian food as well, but my sons don't so I try to do a little of everything, depending on who's home for dinner!
You did a great job on your breads. Chewy sounds much better than pancakey to me. :)

I've only ever made pita bread. This looks a LOT easier! I love the idea of wrapping this around something. Great work--thanks!

the onions with this sure make it sound very appealing

I'm not big on Indian foods either, this flat bread sounds good and you're right... it'd be great with a stew. I'll give these a try!

Goldie: You should try them! A lot of them don't use yeast, so they are faster and easier. Of course, the ones that use yeast are awesome and yeasty...

Vicki: Heh, me neither. And me too.

Natashya: That's what I had gathered with the cast iron. Thanks, chewy was way better than pancakey.

Kate: Yeah, it's much easier than pita. Which I've also been meaning to make.

Year on the Grill: They do a lot of good in there. It tasted a little like a scallion pancake.

Karen: Let me know how it turns out for you!

You've been cooking some fun ethnic foods over here. This is a great bread for spicy foods too.

I've been wanting to make flat bread for a long time. Every time I say I'm going to make it, I always end up just making regular loaf bread. lol.

I've been looking for a good flat bread too. This looks really good - it's definitely in my future. I do like certain Indian dishes, but no one else in my family does, and they despise the smell of it cooking, so I don't get to eat it often.

Well, being half-Indian, I have to love Indian food, don't I?? I think you did a great job with the paratha. I like them both simple like you made, and with lots of spices. Couldn't agree with you more about naan!

This looks so good, and how nice that as a bonus it also looks rather easy.

I still have not forgotten that previous flat bread you made. Thanks for the link; now I don't have to go digging for it! I have bookmarked it because I really want to make it. I just need to get my act together!

We love naan and never actually tried paratha - I think we would really love it as well, can't wait to try it!

I love Indian Flat breads, thought making it from scratch would be like rocket science.... Thanks for clarifying that misconception ! Looks Perfect ! Will give this a shot when I make one of my typically SPICY curries....

Hey very nice, I love flat breads but have never made any.

Very impressive! Your paratha looks great. I like Indian food but agree that sometimes the spices can be a bit too, uh, spicy.

I don't like Indian food either because I can't stand the heat! I'm obsessed with naan. I've never had paratha before, but I'm sure I would love it. I love carbs!!

Looks great, Bob! I'm a naan fan,too, but I never thought to make my own...much simpler than a yeast bread, eh? I'll have to give this flat bread a try!

Um, in my family, you mix mashed spuds with some flour and milk and you get the original flat bread-Lefse!

Sounds like you found a start to you quest of the ultimate flat bread. Carry on, Bob, carry on.

that looks awesome!! I want to try these for sure. I tried making Naan once and failed miserably. I bought some at trader joes and loved it. Ive never had Indian food at a restaurant...only the few that I've made at home, which I like or else i wouldn't make em...hahaha but I have no idea if I'm doing it "right". but who cares if it tastes good, right?

OH yes, you are so right, this would be perfect with stew!!

I used to make tortillas all the time (very similar)and I always cooked them in a "dry" skillet. I think it would work, as long as your dough is kinda on the dry side, right? These do look and sound awesome. A must try.

I love indian food. I've made naan before, but not parathas. I'll have to try this next, thanks!

This is fantastic! I can't wait to try it. I love Indian food but haven't tried making it at home (unless I have help from pre-mixed curry powders and such). The breads are definitely awesome - naan, roti, and paratha!