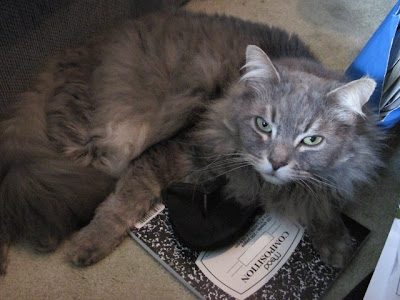 It would have been almost impossible to pry him away from them. Notice the protective limbs flung across both of his nap aids and the "don't even think about it" glare. It's pretty amusing when he tries to be tough.

Noodles likes to lay right underneath wherever wires are going to be. 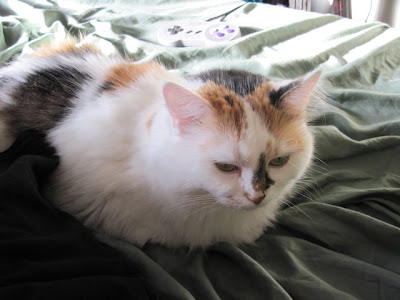 Don't let her placid demeanor fool you, if I had picked up that SNES controller and tried to play she would have attacked the cord and caused some damage. So we just sat there, both of us kind of bored, wishing the other would just let us play.
Email ThisBlogThis!Share to TwitterShare to FacebookShare to Pinterest
Posted by Bob Labels: cats at 10/25/2009 12:00:00 AM

Awwww! I love your cats!

SO adorable! My cats love to rub my shoes, but they don't sit on them. Hey, you have an SNES? I do too! Although I haven't played it in years. It was a great system, wasn't it? My favorite game for it is FF3.

They look so sweet! Esp. Noodles...LOL

my cat likes to sleep on the electric blanket, yeah big surprise. but he also likes to knead on it, not good. electrified kitty.

How lovely! Love the cat's eyes!

The look on Bob's face is priceless! Cute kitties.

Lately Thumper has been a "crabby tabby" and wakes us up at 5:30-6:00 am by meowing loudly. And very insistently. Of course now that it is afternoon, he's sleeping in the spare bedroom in a ray of sunlight coming in the window. But then he'll sit in my lap in the evenings and purr so loud... I just wish he'd get his sleep schedule back on track!

Gosh your cats are so darn snuggly! Makes me want to squeeze them though I bet they won't like that! Thank you for the welcome back! *hugs you* Its great to see my blogging friends again!

Wandering Coyote: Me too. ;)

Palidor: FF3 is the best FF game ever made. Ever. Also one of the best console RPGs ever. I play through it every couple of years. Good times.

Angie: Heh, she is sweet. When she isn't being a terror. The real Bob is always sweet.

Dawn: That could end badly...

Goldie: Heh, Noodles gets the crazies at 2-3 in the morning. She jumps up on the counters, knocks things down, attacks the doorframes. I feel your pain.

Such cute cats, I love them!

So funny! They have personality, that's for sure!

They are just too cute!

Aww this makes me miss the cat I had growing up. Her name was Wink (why my parents let 3 year old me name her...I dunno) and she had a talent for perfectly draping herself over the newspaper or book I was reading (smart kitty)!

I totally agree with you, Bob! No other FF has come close, although I liked FFXII quite a bit... until the end. The battle system was a lot of fun.

For me, the best RPG EVER: Xenogears for PSX. Have you played it?

Palidor: I couldn't get into the FFX games, I missed the overworld too much. I haven't played Xenogears, but now I want to. :D