All measurements are approximate, I didn't measure anything I'm afraid. 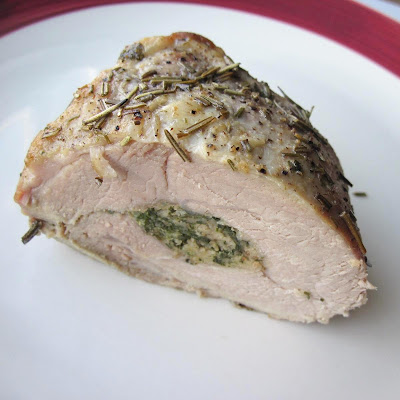 Preheat oven to 350. Cut a pocket in the roast. Mix together the bread crumbs, basil, parsley and spinach. Season it with a little salt and pepper. Stuff the spinach mixture into the roast and then either tie it up or use a skewer to keep it closed. Rub the roast with rosemary, garlic powder, olive oil, salt and pepper. Place the roast in a shallow pan, preferably one that has a lid, and surround it with the onions. Put it in the oven for 15-20 minutes or until it starts to brown. Remove it and add the broth. Add a couple tsps of rosemary and some pepper to the broth, cover it tightly and return it to the oven. Cook for another hour or so, until done how you want it. Let rest for 5-10 minutes before carving. Separate the fat from the braising liquid and spoon it over the carved roast.

My girlfriend went to the store the other day to grab some ribs. They didn't have any. Her response: Wtf, where're the ribs? But, no ribs. So she grabbed a boneless rib roast instead. I'd never made one before, so a little research was required. I found out it's from the rib section of the loin, so it's a lot like a center cut roast but with more marbling. Score. Unfortunately I don't have any prep shots, it was kind of spur of the moment and at night. I hate taking pictures at night. I did get some finished pics though, thanks to the magic of leftovers. 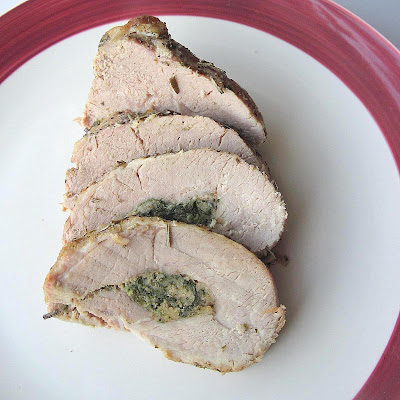 So, this was my first stuffed roast. It came out pretty well, if I do say so myself. I could have done a better job on the pocket, but if it had been bigger (or neater) I would have needed more stuffing than I had made. So it all worked out. Heh. 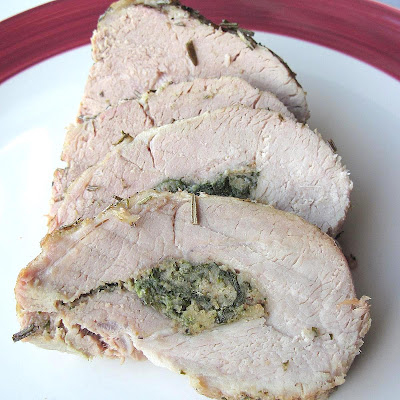 What I did was just cut a three inch hole in the side of the roast, stick the knife in almost to the other end and kind of wiggle it around till there was a pocket. I've seen people on TV do it a million times. But like so many other things people do on TV, it's not quite so easy to do at home.

Not that this was a fail, it was quite good. The stuffing was flavorful, the pork was moist (yay marbling) and the braising liquid made a fine sauce. Since I didn't get any prep shots I'm not going to bother going over the whole method, I'll save that for another post when I do have some. Hm, I've been wanting to do an apple stuffed pork loin for a long time, but haven't ever gotten around to it. After using the rib roast, I will probably use that instead of the center cut from now on. It didn't dry out so easily. Heh. So, anyone have tips or tricks for stuffing a roast? How about favorite ingredients?
Email ThisBlogThis!Share to TwitterShare to FacebookShare to Pinterest
Posted by Bob Labels: main dish, pork, roast, spinach at 10/05/2009 12:43:00 PM

Bob, first ...can you have an electric grill on your deck?

If not, when i was in college, I spent three years with just a walk to the patch of grass, and an hibache when i got the jones on for grilling. had a lot of munchies in college (but it was the early 70's... lot of munchies everywhere before all the recreational stuff got too complicated... But I digress.

And one tip on your pork loin (that is PERFECT looking BTW), You know that sharpening rod thing you use to sharpen your knifes. Once you stick your long thin knife through the loin, use that rod thing to expand the hole.

Love the idea of stuffing any kind of meat, especially pork. This look superb!

i like to stuff mine with lots of garlic with some kind of sauce on the side. Looks good.

No ribs? Okay, that's totally weird. Anyway, for your first stuffed roast, that's a fantastic job! I've only made a stuffed pork roast once about 8 years ago. I think that I put a mix of bacon, fresh bread crumbs that I made in the oven, celery, and sage, then I roasted the whole thing with some chicken broth and apple juice.

looks awesome..I've made plenty of roasts, but I've never stuffed a roast.

I would have to research how one makes the pocket...

I've never stuffed a roast. You did a great job!

This looks awesome, I can't believe it was your first effort! And I'm with you on the nighttime picture taking...I've had to fake a few shots the next day with leftovers. Anyhow, this looks incredible, and now that you know the method, you can do almost any stuffing imaginable.

Bet the apple filling with some sort of cheese (cheddar?) inside will be good too. Nice bite!

Hard to believe it was your first time stuffing a roast, it looks just lovely. I like your choice of stuffing too, spinach/basil sounds terrific!

I think you did a great job on this roast. I typically stuff pork roasts with apricots and prunes - and use a long knife blade to create the hole. You can read about it on my blog post of http://ciaochowlinda.blogspot.com/2009/04/pork-loin-stuffed-with-prunes-and.html

oops. sorry I used the wrong ID/sign in on that last remark about the pork roast stuffed with apricots and prunes.

No ribs?? That's because everyone else got there first! But I think this was a case of serendipity, because this is gorgeous. I think it looks perfect. And the sauce sounds perfect with it. BARVO!

Bravo..I think you are the only one who noticed that was Jack Skelington on my cookies!!!!
Your my friend for life!!! LOL

What a treat with that delicious stuffing inside. I've never cooked one of these!

I REALLY need to start making more stuff like this. Any kind of stuffed meat is so impressive! I'm so excited I found your blog! I will be checking back often :)
-Mini Baker

This looks great. Stuffing to a roast or meat makes it so over the top!

Wow, who even knew this was your first one? Great job and who cares about the during pics...it's the after that count I say!

It came out fantastic! Good work.

Apple stuffed would be awesome!! This looks great...awesome first round :)

Mmmm.... LOVE meat stuffed with stuff! And pork is my FAVORITE!