Sunday Cats. And Some Pasta.

I recently made this, 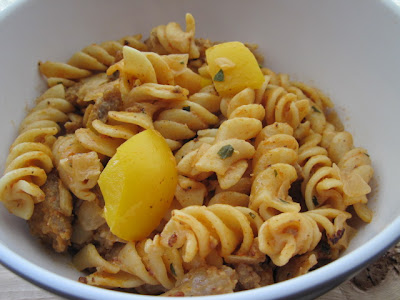 which is based on this. It's pasta in a tomato cream sauce with other stuff in it and it's wonderful. But I realized that I had never properly attributed the inspiration (read, person I stole it from) for it. What it was, to begin with, was this recipe from Pioneer Woman with Italian sausage replacing the shrimp. And it's amazing just like that. But I've changed it up, because I'm like that.

This most recent time it had sausage, peppers, basil and oregano. I've done it with sweet chicken sausage, basil and sage too, that was really good. I think prosciutto and sauteed chicken would be good in there, or bacon. If you're into mushrooms then I can only imagine that would be a good time. My sister made it once and used diced tomatoes instead of the sauce to make it chunky. Another thing to think about. Broccoli, zucchini, peas, green beans, whatever you wanted to put in it would be good I think.

Anyway, cats. Living beings can be hard to take pictures of, since they tend to move around a lot. So when Noodles decides to sit still in a bright patch of light I grabbed the camera to see if I could get some shots. I got one 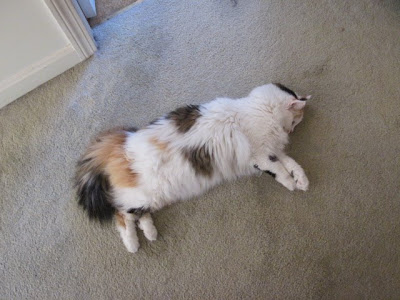 before the real Bob wanted to know what was going on. 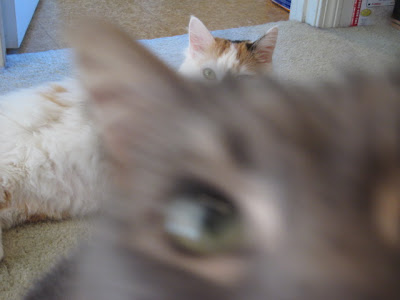 Which made Noodles hit and chase him. I did get a shot of him in the same spot a few minutes later though, 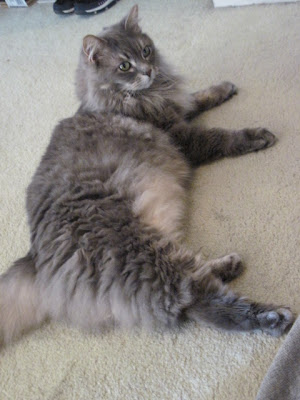 looking particularly vacant.
Email ThisBlogThis!Share to TwitterShare to FacebookShare to Pinterest
Posted by Bob Labels: cats, pasta, sausage at 6/21/2009 12:00:00 AM

I love pasta dishes! At least you got some shots of your cats. I was chasing my baby cousin around and had blurry shots. Thats what happens when I refuse to use flash.

Dajana: So true. That's my favorite thing about pasta. :)

Steph: Heh, kids are a pain to get pictures of. I don't often use flash since I'm used to taking pics of food, I really should use it more when I taking pictures of the cats.

I guess that's why I love pasta so much... you can add a gazillion different things to it. I know who calls the shots in your house and it ain't a human ;)

Oh, I love your cat pictures!

Your cats are so cute!
Pasta looks great. It looks like a nice alternative to the heavy cream sauces I've been using. My pants will appreciate it when I switch over to this recipe.

Bob is such a beautiful cat. We use to have one that look almost identical to him, named Junior. He was so cool that even our rottweiler respect him!

The pasta sounds delicious any and every which way! And your kitties so cute!! I love how Bob had to come over to see what you were doing. Or he was trying to block the view of Noodles - and saying look at me!

I just want to squeeze your cats - they are so fluffy and adorable!
Love your pasta dish.

noble pig: It really is, that's one of the things I love about it.

Pocky: Heh, light cream isn't that much better for you. But hey, every little bit, right?

Danielle: Weird, I was just talking to my sister in law about the cat she used to have named Junior. He was also mad cool.

Reeni: I'm not sure what he was doing, he has a thing with the camera. He wants to stare at it or, if it's close enough, rub it with his face. He's a bit intense about it, it's pretty funny.

Kristen: Thanks! They actually put up with squeezing pretty well. :)

What a great, versatile pasta dish!

Bob is one competitive cat; love the 'Hey, whatcha doin?' close-up of his snuggly face. In the end, he got the space and the paparazzi attention!

That middle pic is fantastic!

yumm i love pasta dishes so do my husband :) nice shots of ye lovely cat.