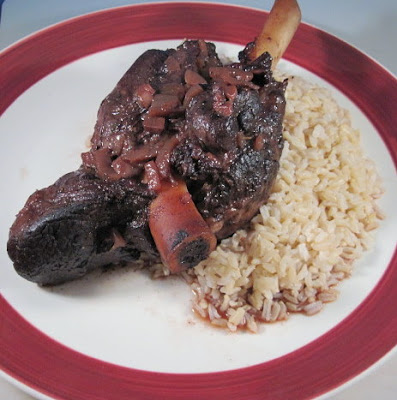 Rinse and dry the shanks. Rub them with plenty of oregano, rosemary, salt and pepper. Heat some olive oil in a dutch oven and brown them well. Remove them from the pot and add the shallots and garlic. Saute them till soft then add the wine, scrap up the fond, reduce the heat and let it simmer till it doesn't smell boozy. Add a pinch of salt, the juice and the lamb. Cover it and let it cook for 2-3 hours, till the lamb is very tender. Remove the meat, turn up the heat and let the liquid reduce for a bit. Serve with the sauce.

I love lamb. I sometimes suggest to my girlfriend that we have it. This leads to fights. Often quite gruesome ones, involving flashing blades, furious gun play and mad nunchuck skills. The inevitable conclusion is my girlfriend with a knife to my throat, a pistol to my temple or a chair leg poised to deliver the finishing blow. I croak out something like "All right, chicken!" and then she allows me to cook dinner.

Ok, so that never happens. But she really doesn't like lamb and I rarely do serious cooking for just myself. I get it at any Greek festival I happen to go to and order it at restaurants, but I hadn't actually made it before this. Then my girlfriend comes home with a package of shanks. Isn't she sweet? I pop them into the freezer and await an appropriate moment. And that moment was yesterday when she was going out to dinner with people from work. So I pull out the lamb to thaw and consult my sources (the internet, one of my brothers and my mom. The sister I called wasn't home and apparently doesn't eat lamb anyway.) Then I made this.

The first thing I decided was to keep it simple, I find that makes it harder to screw up. Shanks are best braised and I had some pomegranate juice, so I decided to use that. Wine is always good for braising, so I grabbed some Merlot. Garlic, oregano and rosemary are classic lamb seasonings so those were in. And I had a shallot that wanted using, so that finished it off. I took the lamb and dried it off. 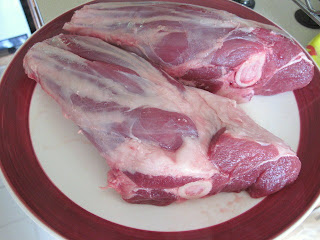 I really should have rinsed it first, but I didn't. Anyway, I rubbed it with a goodly amount of salt, pepper, rosemary and oregano. 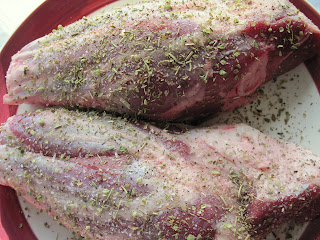 Next time I'm going to use a little more, I think. This is also a recipe that you want to use dried herbs for, they are best for slow cooking. I browned up the shanks, 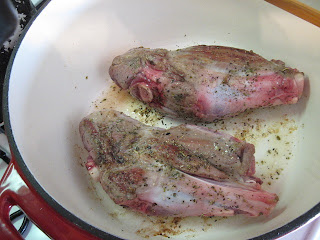 removed them from the pot 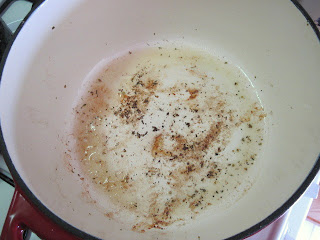 and added the shallot and garlic. 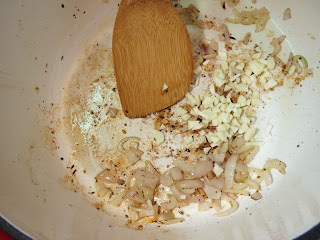 I didn't cut the garlic too small since it was going to break down over the several hours of cooking. I sauteed them till they were soft and then added the wine and juice. This was a mistake, I should have added just the wine and let it reduce a bit first to get rid of the alcohol flavor/smell, then added the juice. Then back in went the lamb

and I realized I needed more liquid, so when I added the wine wouldn't have mattered anyway. Then the cover went on and it simmered for about three hours. 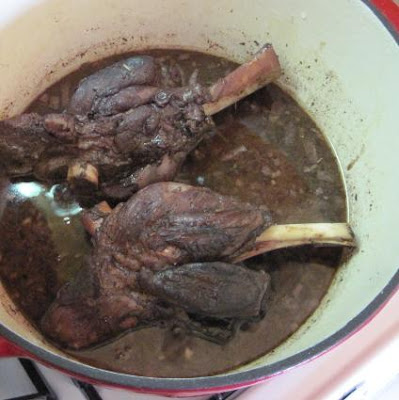 You could do this in the oven, but I prefer to do things on the stove. Plus my dutch oven barely fits in my tiny real oven. I removed the lamb and reduced the liquid a bit to use as a sauce. I had it with some brown rice that I put a little garlic and onion in. They aren't really that pretty, 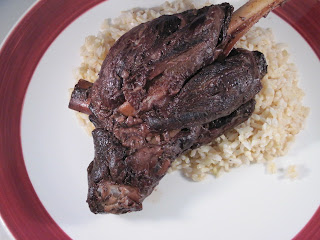 but they were very tasty. 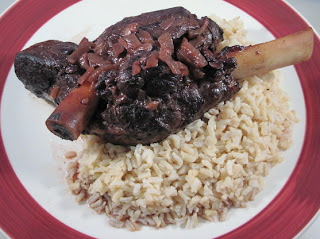 So that's it, Merlot pomegranate braised lamb shanks. It was quite good, the tart/sweet juice and the strong flavors of the wine and lamb went really well together. The shanks were falling apart and very moist. It would be good with beef too, maybe brisket. Next time I make it I'm going to use more herbs, like I had mentioned, but other than the amounts I don't think I'd change anything else.
Email ThisBlogThis!Share to TwitterShare to FacebookShare to Pinterest
Posted by Bob Labels: booze, braise, experiment, lamb, main dish, sauce at 6/10/2009 12:00:00 AM

interesting what wine does to meat huh? I never thought about using pomegranate juice tho. too bad I used all my pom juice for sundays cocktail LOL. Looks great dude!!

Im with your girlfriend on the lamb issue, she must be a lovely lady to bring you home some anyway!

I think it looks great anyway:)

I am not a lamb fan at all myself, but it was awfully nice of your GF to bring some home for you. Great recipe - sounds like you could do it with all kinds of meat!

I AM a lamb fan, and that looks really nice. It is good to see you are getting good use of your enameled iron dutch oven too. I need to get me one of them...

How was its texture compared to the roasted lamb we got at the festival last week?

The merlot and pomegranate must added bold and sweet flavor tho this shank. Delicious!

Lamb is one of my favorites and I don't eat it often enough! I bet these shanks were delicious!

I never make lamb but I do like it, guiltily. I just happen to have some pomegranate juice to use up...this might be the excuse. Nice post!

I love rack of lamb and lamb chops but never made them before. Never had shanks but they look great! I love the color from the wine and pomegranate juice!

Danielle: Thanks! I'm sure the cocktail was a perfectly worthy endeavor. :)

Wandering Coyote: I think you could. Next time I get a brisket I'm going to do this with it, I think it will be good.

Brutal: It was very different. It's more like pulled pork because of all the collagen.

Karen: They were! :D

hungry dog: Thanks! If you try it let me know how it comes out.

Michele: Thanks! I've never had a rack of lamb, but shanks are very rich and have the strongest flavor of the cuts of lamb (I think). Shane would probably know...

Mmm lamb is good. Better when cooked right. Having never cooked it before, it's hard to really speak on it. :) BUT your braise sounds like a nice way to incorporate pom juice. Great flavor.

I bet this is great....I have a wonderful recipe on my site for short ribs with pomegranate.

Great! I still have leftover pomegrantite juice from other recipes. And I am a fan of lamb....Mmmmmm

Seriously. Yum. I've been craving lamb shanks ever since I started in on the Merlot this month...and then you go and put the 2 together. Freaky mind-mesh going on here. Want it!!!

Merlot and pomegranate must have added such wonderful flavors to the braised lamb shanks! Love this!

I'm a bit embarrassed to say it but I don't think I've had real lamb before....unless you count those Gyro street vendors. Looks awesome though.

What a good idea to use the POM with the wine. I bet it had awesome flavor to it. They turned out great!

Saweeet! Ok, baahaad pun. (I can't help myself) Anywho, love love love lamb. Always order it out, never cooked it at home. Pom juice, most excellent idea. Merlot more so. Love it ALL dude, you rocked it out!

Oh and P.S...you should post your recipes over in the BS wine club for us ;)

Nothing could be more delicious then Lamb! It's look so Good.

Thanks for sharing your recipe:)


"Join our growing food community and submit your heirloom recipe for all the world to share:)

Duo: Heh, it was good so that's right enough for me! The pom juice went really well with the lamb, it's a combo I'll be doing something with again.

unconfidentialcook: Thanks! I've never made short ribs, that's something I've been meaning to try.

girlichef: Thanks! Heh, weird how that stuff happens.

5 Star Foodie: It worked really well together, I was pleased. Thanks!

Pocky: No need to be embarrassed. :) Gyros are usually half lamb, half beef (at least around here) and heavily seasoned. You don't really taste the lamb. Lamb has a strong flavor, it's one of those love/hate things really.

Reeni: Heh, the wine and juice by itself was really good too.

DDpie: Oh my. :D Sure, I'll put up the recipe when I put up my review. I swear I'll actually do it this month!

Pete: It definitely was. Thanks!

Wine and pom...makes an interesting sauce. We love lamb shanks but I don't cook that often.

The aroma as the shanks braised must have been heavenly! We are definite lamb fans in the Noodle household; I usually make loin chops and have only roasted a leg one time (it made a huge mess in the oven - all that crackling and spitting of the melting fat - but it was delicious!) This looks fantastic for something that was thrown together with what you had!