I had never had any kind of pomegranate stuff before trying this juice. It's just one of those things that never really happened. So when the POM folks offered to send me some I was pretty excited, I like new things. Plus I had heard such good stuff about it all over the blogs. So it arrived and cracked one open to try it out. It was... sweet. And tart. Hm.

I was expecting a little more... something. I'm not sure what. But it was still good and I figured I could do something with it. In fact, I've done two things. One was the lamb shanks I posted about the other day. 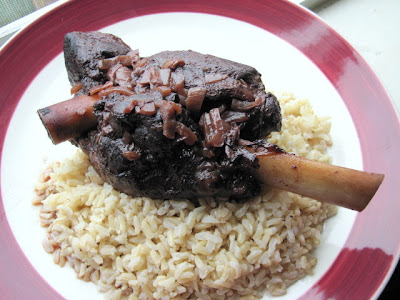 In fact the half Merlot/half pomegranate juice base was really, really good all by itself. Heh. But the juice went really well with the other flavors in the dish, which was nice. The other thing I did was some beef teriyaki. 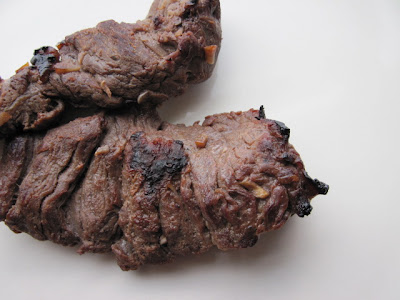 This was just 3/4 cup pomegranate juice, 1/4 cup soy sauce, a couple cloves of garlic, some ginger, a little sugar and salt and pepper. I kept it very simple to try to showcase the juice and they came out quite well. The sweet/tart juice and salty soy sauce complimented each other nicely. I'm going to work on that recipe a bit, I think it has a lot of promise.

So, POM Wonderful juice. Frankly, I wouldn't buy it to drink on it's own (although apparently it's quite good for you). But I would definitely buy it to use in all kinds of things. In fact, I'm almost out of the bottles they sent me and I don't think I have enough to make what I already have plans for. So I'm probably going to be getting more soon because now I have ideas that I need it for. So that was their plan all along...
Email ThisBlogThis!Share to TwitterShare to FacebookShare to Pinterest
Posted by Bob Labels: beef, fruit, review at 6/19/2009 11:42:00 PM

tee hee...sounds delicious. Those lamb shanks are still driving me nuts...I want one!

BTW... you won the pillsbury giveaway at my blog http://kitchengirljo.blogspot.com/2009/06/pillsbury-bake-off-voting-and-giveaway.html

Could you shoot me an email with your mailing info?

I finally bought a bottle of POM (at a whopping $5-something per bottle!) just to see what the fuss was about. I tasted it, didn't like it, and there's 3/4 bottle of it still sitting in my fridge.

I love POM! Just wish it didn't cost so darned much!

I never thought about cooking with POM. I've bought it before...and i like the pom - blueberry combo

girlichef: Heh, thanks! You should try out the shanks, they came out well. :)

Karen: Yeah, I wasn't crazy about it by itself. But I did like it with other things, you should give it a shot like in a salad dressing or something.

Wandering Coyote: So I've been hearing. I might not get to do those other things I have plans for...