For real this time. And although I didn't get to do any of the blog housekeeping I wanted, I have been cooking. And despite all the cooking I've done I didn't get a single good instructional set of pictures. So I'm just going to show you guys some of what I did get and babble about food photography for a while, no recipes today.

I'm getting better with my new camera, but I'm still not getting as many good shots as I want. Some of it is that I often don't have time to set up (or want to deal with) my tripod, some of it is that I've been into photography for less than a year so I still don't really know what I'm doing, yet another part of it is that my new camera wants a different kind of light than my last one and some of it, too, is that I'm still (sometimes) trying to take my pictures quickly so my food doesn't get cold. Heh, I need to get over that. But here is the main lesson I've learned about photography: lighting is key. Here, I brought some visual aids. 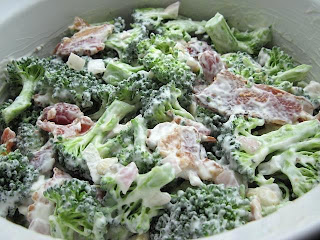 Still not ideal, but the second is much better. The difference was tilting the dish a bit so it was facing the light source more. You know what else would have made it look better? Setting it up on a stable surface and using my tripod instead of holding the dish in one hand and the camera in the other. That's a habit I need to break if I want to get good food shots. Oh, that's some broccoli salad for those who are curious. One of my favorite summertime sides. I made it a bit differently this time, I swapped the onion for shallots and the sunflower seeds for pine nuts. I think I did something else too, but I really don't remember. Anyway, it was wicked good, I used some thick cut pepper crusted bacon. Of course, I got a shot of that. 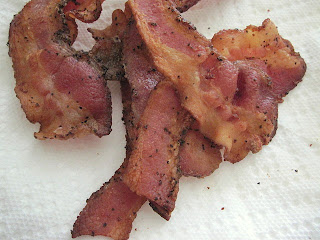 Mmmm, bacon. Speaking of lighting (we were, a while ago) I'm not sure what made me put this shot of the roast beef up the other day. 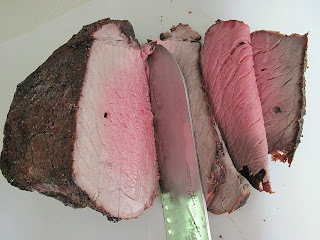 This one is really much better. 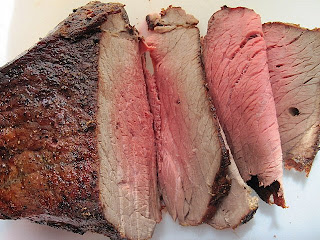 Because of better lighting.

Another thing I've learned, just because the little rectangular focus indicator is where you want it doesn't mean it's actually focusing on what you think it is. For example, the rim of the glass instead of the strawberry shortcake itself. 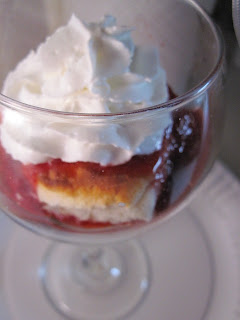 And yeah, that's the wrist strap in the upper right hand corner. I'm known for my attention to detail. Heh.

Well, that's most of the stuff I don't have plans for. I have a bunch of reviews coming up, so Saturdays are full for a while. I've got some new cat pics for Sundays, too. My girlfriend is eating dinner with coworkers tonight, so I'm finally making some lamb. Hopefully I'll get some good shots and have that up on Wednesday.

Email ThisBlogThis!Share to TwitterShare to FacebookShare to Pinterest
Posted by Bob Labels: bacon, beef, broccoli, random stuff, salad, side dish at 6/08/2009 11:41:00 AM

I love that broccoli salad. If only I could get my kids to leave the broccoli along long enough to make the salad!

I can see that you have fun with your camera. Your photo look beautiful.

its soooo hard to get a good shot of food. I use to know a food photographer (back before I even cared about taking pictures of food, darn it). the food she shot wasn't even edible! LOL. My biggest challenge (besides the focus issue must remember to wear glasses to confirm the focusiing haha) is the lighting cuz its usually dark outside when I'm cooking. I really think you do a great job!!

Nice to see you back! My pictures are just OK, but I fully realize I am not a photographer and that my talents lay elsewhere. New cameras are fun, though. I've had mine for just over a year now and I'm still learning things about it and haven't figured out all the features.

Yaaay! Welcome back! Lighting is the bane of my life, no idea what I'm doing, or the camera's doing, or anything else really. You do a great job, methinks.

I'm so glad for summer and more hours of light! Especially for those late dinner pictures. The roast beef looks awesome!

Glad to see you back!! What a difference in the shots. You must be enjoying your new camera:)

Yeah lighting is so important! The shots with proper lighting are beautiful :)

Welcome back! Fun to experiment with a new camera!

Any time anyone asks me about food photography, I just tell them to use a tripod. Because in my opinion that is the one single thing that have made my food photos better. I couldn't even begin to think about lighting, composition or white balance (well, okay, I coulda figured out white balance) if I weren't using a tripod first.

This is really a well laid out website. I like how you have presented your information in excellent detail. You seem to really love your site. Keep up the great work here and please visit by my blog sometime. The url is http://healthy-nutrition-facts.blogspot.com

Gwen: Heh, most moms want their kids to not leave the broccoli alone! :)

Elra: Thanks, I am having fun with it.

Danielle: Thanks! Yeah, I saw a show about pro food photographers, it was kind of scary. At least I can say I ate everything I've posted about! Heh.

Karen: Thanks! I need to get more process shots of the roast next time I make it so I can post the method.

Wandering Coyote: Thanks! I don't think I'd call myself a photographer either, at least not yet. I'm working on it. ;)

Yesica: Thanks! :) Yeah, lighting is a pain. I recently bought a light box setup that I just really used for the first time today. I'll be posting about it tomorrow.

Reeni: Yeah, for real. I keep forgetting that the light is different now and my best picture time for natural light isn't 3 in the afternoon anymore. Heh.

Donna: Thanks! Yeah, it's a good time. I really should sit down and read the manual though...

girlichef: I agree, broccoli salad is good whenever. I've even eaten it as a whole meal before. ;)

Aleta: Yeah, the tripod is a good time. I need to use it more often. Heh.

Welcome back! Bet you're loving the new camera. New gadgets are fun to test. Have you thought about making a lightbox? We just did it this past weekend. We'll have the post up tomorrow to show the outcome. Yay! Can't wait to see all the fun things you've been cooking.

Yep, lighting is everything. It allows the shutter to remain open for a shorter period of time, therefore a clearer image is produced.

Bet you're loving that new cam right? Pics look awesome. And ya, my hubby laughed at me stressing over planning the lighting in our kitchen remodel...well, my foodie buddies understand me anyway :)