I woke up at around seven AM the other day (I usually work nights so that's really early for me) and couldn't get back to sleep. So once again I got bored and wrapped something in pizza dough. Hey, I needed something to do. Making the dough took up a couple hours and while I was waiting for the dough to rise, I spent some time cleaning. Two birds and such. I had a couple cooked Italian sausages left over from a previous meal, so I figured I would just wrap them up with some sauteed onions and peppers. It came out really well, here's a pre roll shot. 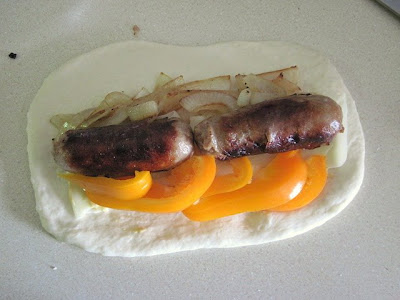 Please ignore the stuff on the counter, it's all from this meal I swear. I also put some mozzarella and a little Dijon mustard on there. Then I popped it onto the pizza stone in the preheated 500 degree oven. And I pulled out this. 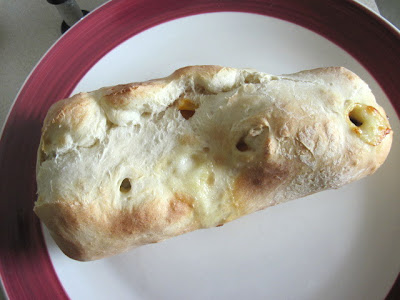 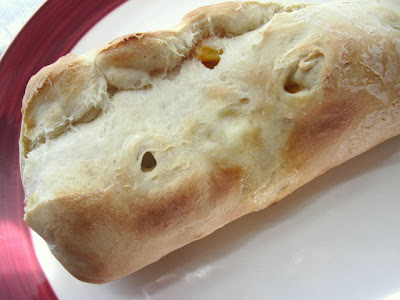 Had a cheese explosion or two as well. But whatever, look at that. 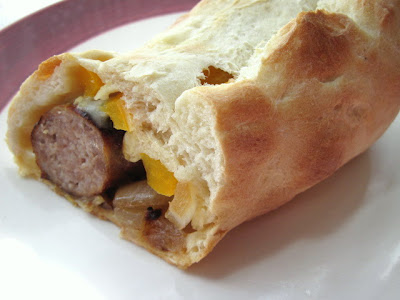 It was wicked good, even lukewarm after I took a million pictures. Heh. 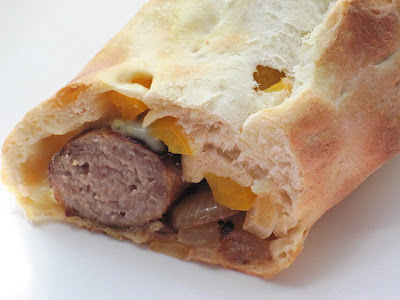 I meant to brush it with olive oil before it went in but completely flaked. That would have made it brown much more evenly. Darker, too. You could just as easily cut up the sausages and put little bites of them with some diced vegetables in a smaller piece of dough and have some appetizers if you wanted. Good times.
Email ThisBlogThis!Share to TwitterShare to FacebookShare to Pinterest
Posted by Bob Labels: baked goods, bread, sausage at 6/19/2009 12:00:00 AM

Yum! I can almost smell it through the 'puter!

Not so much a sausage lover, but this calzone looks great.

This is totally my kind of food!! Looks awesome! I wish I had one now...and it's 9am!

Looks like a baguette to me =P a delicious one too

This looks great... I could eat it for breakfast :)

Aggie: Heh, I could go for one for breakfast myself.

Excellent! Calzones are still on my "must make" list, which is getting rather long.

ya, I've never made a calzone before...now I must try it for sure!! Looks great. It's lunch time, I'm hungry....wheres MINE?

I love sausage and peppers any which way...but wrapped in pizza dough--yum! I think I would have put some tomato sauce in there....

It's totally a hand sandwich. You're good with these meats in the bread creations.

This looks awesome!! And why not...wrap it up in pizza dough and call it a calzone- the possibilities are endless! Sounds good to me :P

Oh, I never made Calzone, you are very clever making your own. It looks scrumptious!

I think I just found a great recipe my 4th of July leftovers!

I love calzones and this looks great!!

It basically Stromboli, not a Calzone. But, neverless, delicious.