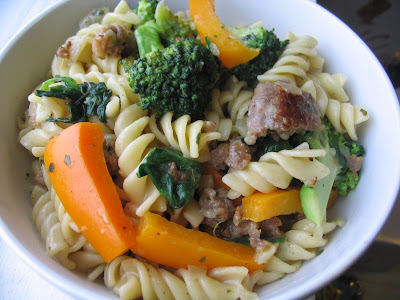 Crumble and brown the sausage in a large pan. Remove it from the pan to a paper towel lined plate, but leave a tbl or two in the pan. Brown the onions then add the garlic, saute for 30-40 seconds. Add the wine and scrape up all the brown bits. Simmer until the alcohol smell is gone then add the broth. Reduce until there's about 3/4 of a cup left. Add the herbs and pasta, stir to combine. Let cook until the pasta has absorbed most of the liquid, stirring frequently. Serve hot or cold.

This is another one that doesn't have a real recipe. I actually only barely remember making this and didn't seem to write down what I did. But I found the pictures when I was organizing my photo folders the other day and remembered it being good so I thought I'd try to reconstruct it. So let's see what's what.

It clearly started with Italian sausage. 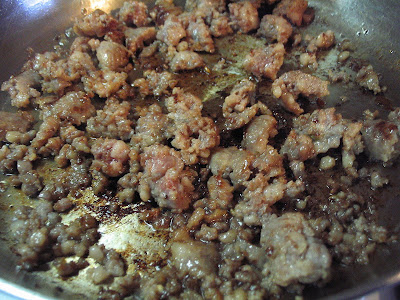 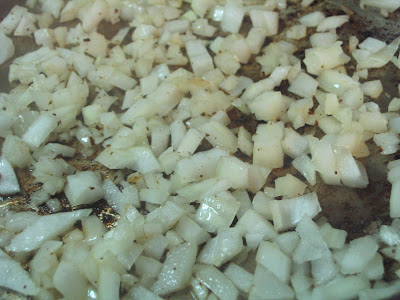 I browned it up pretty well. Then a small mountain of garlic, I'm guessing three cloves. 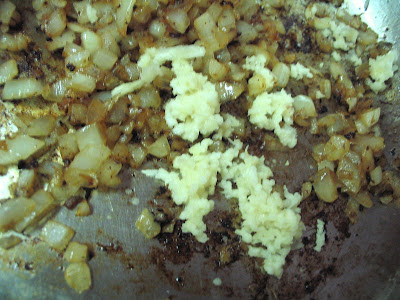 Nothing too surprising so far. Heh. I deglazed with the broth and wine. 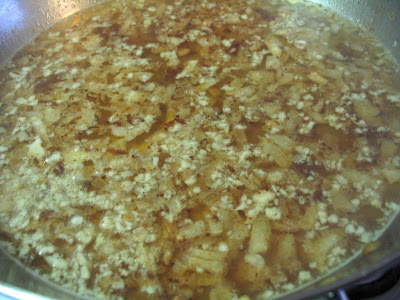 I've found you should always add the wine first and let the alcohol smell cook off before adding broth or tomatoes or whatever else you're adding. I remember using a lot of liquid and letting it reduce to get a stronger flavor. I'm going to guess a cup each of wine and broth, reduced down to about three quarters/half a cup. Then I added herbs, salt and pepper. 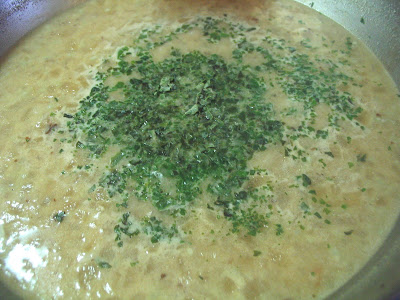 I actually remember this was just oregano and basil. Fresh, though and lots of it. Then broccoli 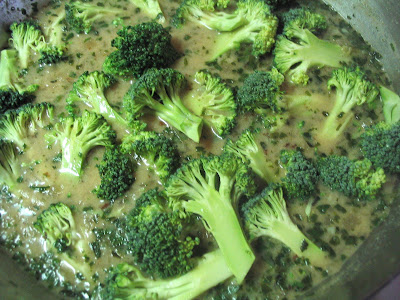 and I let it simmer for a minute to take the edge off it. My views on squishy vegetables are fairly well known, I believe, so I can only imagine the next few steps didn't take long. Then the spinach (which I think I tore into pieces), 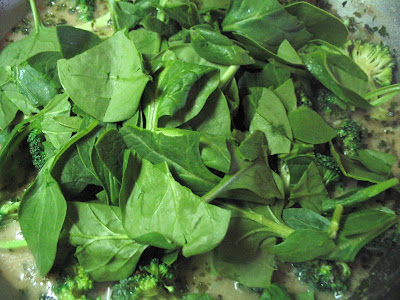 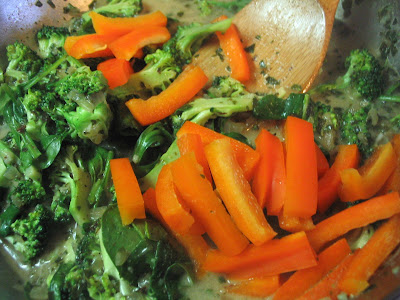 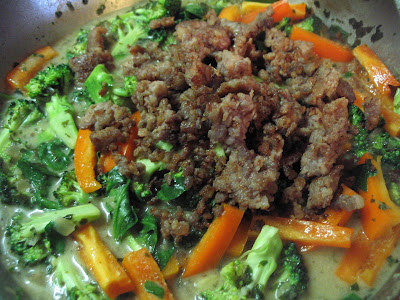 Add the pasta and some stirring. 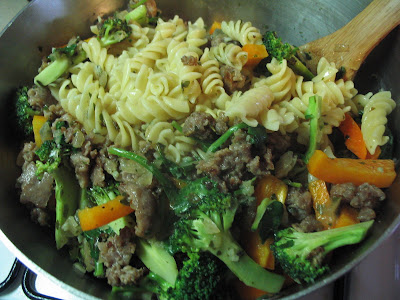 Now I'm pretty sure I let it sit on low heat, stirring every once in a while until the pasta had absorbed most of the liquid. That's why everything looks so distinct. 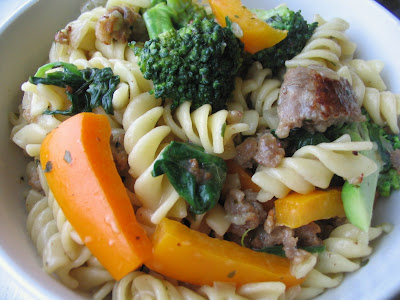 Another thing I remember is it was good hot or cold, which is cool. It was a nice and light, you could use it as a side or main dish. You could also add anything you can think of to it. Some diced tomatoes would be good, you could cut back a bit on the broth to account for all the liquid. Or some asparagus or shredded zucchini. You could take out the sausage, use vegetable broth and have a good vegetarian thing. Toss some cream or bacon in to make it more rich. It's a concept not an absolute, take the idea and make it your own.

Oh, and I submitted this to this weeks BSI: Greens over at Girlichef. There's a ton of good stuff over there you should go check it out.


Email ThisBlogThis!Share to TwitterShare to FacebookShare to Pinterest
Posted by Bob Labels: broccoli, pasta, sausage at 6/17/2009 12:00:00 AM

Your pasta looks delicious and healthy at the same time. I like that you added lots of greens!

I love to see dishes that have so much fresh color popping out. It just looks healthy! During the summer I am more inspired than ever to load up on locally-grown veggies. Your recipe will be great for that.

I found you on TasteSpotting and am writing to say that if you have any photos that aren’t accepted there, I’d love to publish them. Visit my new site (below), it’s a lot of fun! I hope you will consider it.

Delicious pasta with sausage and all the veggies!

Glad you found it and posted it... always love different pasta dishes!

Looks delicious! I love all those veggies, and I agree sausage and pasta is a great combination!

I love these type of dishes...and that fact that you can alter them to suit your tastes (or your stockpile). Veggies, sausage and pasta...hard to go wrong.

noobcook: Heh, I don't know about healthy, what with all the sausage. Well, I guess it has veggies in it so, yeah! :)

tastestopping: Thanks, I'll check your site out.

Karen: Me too, plus I needed something to post and thought I didn't have anything! I was psyched to find it. :)

JennDZ: Thanks! My mom is shocked at how many vegetables I eat now. Heh.

girlichef: For real. You could even use leftovers in it.

Awesome Pasta Bob!! I need to file this away in my brain for future reference.. Very summery.. Love it!

My family adore Italian sausage, especially the spicy one. Great idea to combine the sausage with plenty of veggies. Look and sounds deeeelish!

This looks really delicious. Love that it's good hot or cold. I like eating leftovers straight out of the fridge.

what a great, quick, easy, one dish meal! I love it when dishes are versatile...and you can just add what ever catches your fancy or what you have in the pantry. and i'm a total sucker for good sauce! YUMMY

The italian sausage will flavor up the pasta a lot! and with the veggies, it is a complete meal.