So, I made another stuffed braid. In case the title didn't clue you in, it didn't come out quite as good as last time. Well, appearance wise anyway. It was wicked tasty, but not quite as... er, braidy. I think I know what happened though, so next time it should work out much better. The biggest problem, I think, was I rolled out the dough too thin. The first time I did this I floured my counter and rolled it out. When you use flour the dough springs back a bit, ensuring the dough is kind of thick. This isn't a good choice if you want a thin crust pizza. But for the braid it means the dough strips puff up more, closing it up and making it look lovely. The thin strips didn't puff much at all.

Now, you might be asking "how did you get the dough so thin anyway?" Well, I used olive oil instead of flour when I rolled it out. I saw Sara Moulton do it once on her PBS show. It makes the dough cling to the counter, instead of spring back like with flour. This makes it easier to work with, but thin. Like I said, great for pizza, less great for a braid. And the oil makes the dough not stick together quite so well. Which was the second problem. How about I just show you, I think that will work out better.

This time I decided to make a cold cut stuffed braid. It tasted really good fresh from the oven, but was actually best the next day, cold. When it was hot it was really juicy and sloppy. Which is fine, but kind of a pain. But after sitting overnight it was just a solid mass of deliciousness. The flavors mingled a bit, the juices got reabsorbed by the meats and it was just wicked good. Ok, first thing I did was oil my counter. 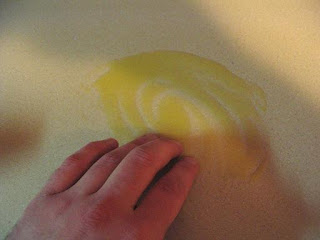 Then I rolled out the dough. 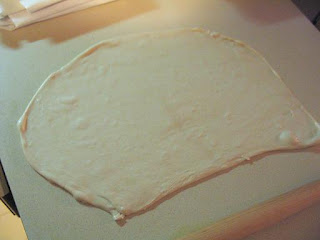 Spread a little Dijon mustard on there 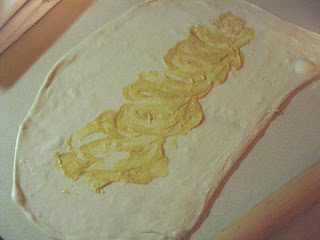 and started with the filling. Cheese first, 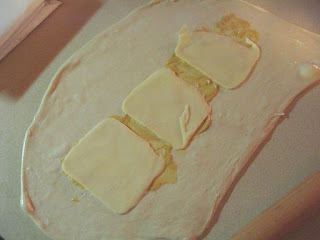 I mentioned when I was making calzones and the last braid that you don't want the cheese on top. If you put it on top it oozes out the vent holes and makes a mess of things. So, the bottom or middle is best. Now some turkey, 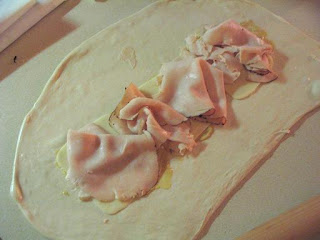 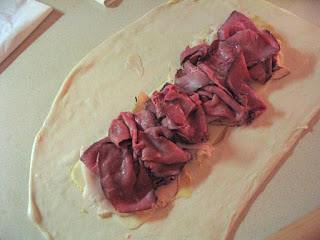 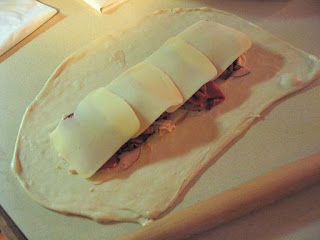 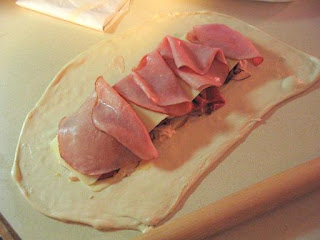 and finally some salami. 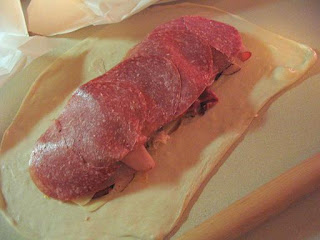 Yeah. That'll do. Now, braiding. Slice the dough into inch wide strips, leaving the end closest to the filling attached. 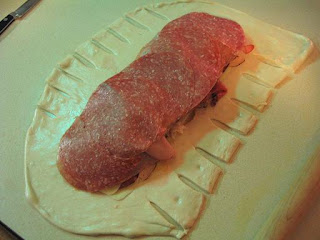 Now fold each strip over the filling at a slight angle, alternating left and right. 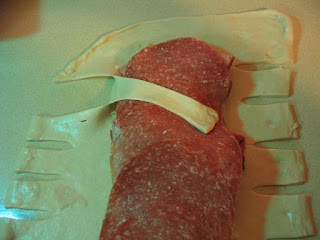 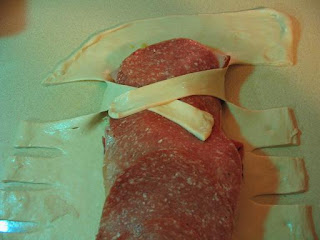 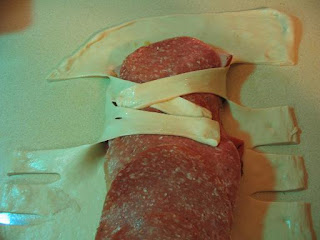 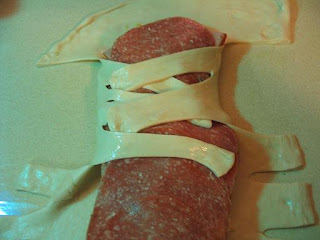 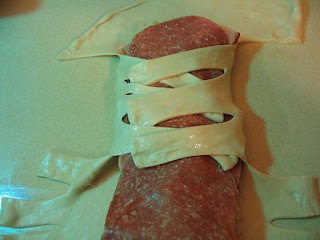 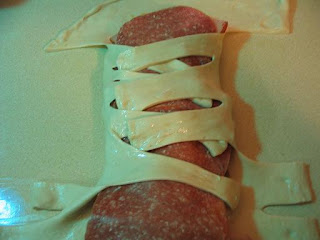 On top of the thin dough not puffing as much it also meant I couldn't stretch the strips as far over the filling, which added to the lack of coverage and visual appeal. If I could have tucked those ends in it would have worked much better. 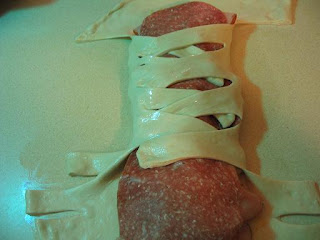 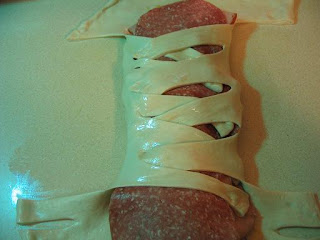 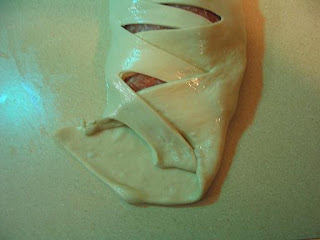 Close up the ends and it's good to go. 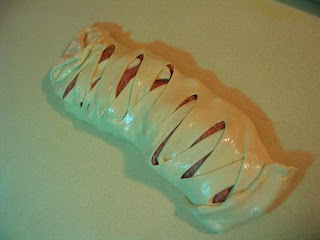 Bake on a preheated pizza stone at 425 for 10-15 minutes or until golden brown. 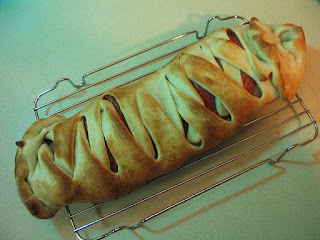 See what I meant about it not looking as braidy? Plus if you notice the ends kinda popped. One thing the oil did do is give it some nice flavor, but I don't think it was worth it. Plus you could get that by brushing it on right before it went into the oven, if you really think it needs more flavor. The finished product, while not as pretty as before, was still mad good. I mean, look at that. 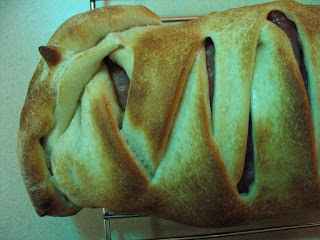 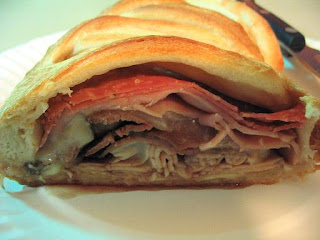 This would be great for a picnic or buffet. Slice it into two inch thick strips, maybe with some kind of dipping sauce. I was going to make some roasted garlic mayo to dip this one in, but kind of forgot. I also wish I had had a nice lager to have with it, that would have been perfect. Oh well, slightly less than perfect is still better than average. Heh.
Email ThisBlogThis!Share to TwitterShare to FacebookShare to Pinterest
Posted by Bob Labels: beef, bread, cheese, ham, sausage, turkey at 12/26/2008 12:34:00 PM

you did a far better job at braiding than I would ever do! Awesome! I would never have the steadiness of braiding. In case you're ever so inclined; when I make my calzones I take an olive oil mix of whatever herbs I'm up for along with the olive oil and glaze the top a bit before baking. Tastes totally awesome!! Even better the next day cold. YUM!

I think this looks amazing! I wish I could come over and have a taste.
Hope you had a great Christmas!

Love the braid...wish i could do that with my hair! Very nice for this time of year!

Dawn: Heh, thanks. :) I've done the infused olive oil thing before, it's wicked good. When I did my chicken and broccoli calzone I used a garlic/rosemary one that was really nice.

Emily: Thanks, if there was any left I'd offer to share. ;) Hope your Christmas was good, too!

That stromboli looks amazing! And don't worry about the looks - taste is all that matters!

Your awesome at braiding! My mouth is watering, how delicious this looks, and leftovers, YUM!! Thanks for the great step-by-step.

biz319: You know, I have to agree. Taste trumps looks. But it still wasn't what I was going for, which means I have to make more. So sad. :)

Reeni: Heh, thanks, I'm glad you like my braids. If you find yourself in Boston I will make you one. :)

I'm gonna have to try this for the family, I know they'ed love this!

Awesome job Bob. I saw your original post and it inspired me to do something similar for Christmas Brunch. I did one filled with cold cut turkey and provolone but then I added some Russian dressing and broccoli. Mine was rolled up jelly roll style but I may try the braid next time.

How beautiful! This belongs on any fancy caterers table. Well done!

Can it be any more stuffed? Lol! Love it! And I like how it kind of looks like a mummy!

Lids: Heya, thanks for stopping by! That sounds good, did the dough cook up well rolled up like that?

Ummmm...That is my kind of Stromboli! :)

That looks pretty good to me! Lots of stuffing in that stromboli - good stuff :)

Bob I am always reading my fellow Bakespacers Blog. Actually I am putting recipes into word as I speak.

Anyway sorry to take so long getting back. The dough did well rolled up which I was suprised at. Of course the braiding makes a better appearance.

lids: braiding may look better, but I'm sure the rolling was easier. I'll have to remember it worked well. :)