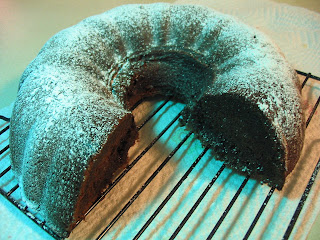 Preheat oven to 325. Prep a 12 cup bundt pan. Mix the flour, cocoa, baking powder and salt together. Set it aside. In a large bowl cream together the butter and sugar till light and fluffy, at least 3 minutes. Beat in the eggs, one at a time and stir in the vanilla. Beat in the flour mix alternatin with the coffee and buttermilk. Pour the batter into the pan. Bake for 60-70 minutes or until a toothpick comes out clean. Let cool for 15 minutes then turn it out on a wire rack and cool completely.

Ha! This time I win! I will not be thwarted by the cake again! It did what I had planned and tasted how I wanted! Not like last time with that other stupid cake. This time I taste sweet, sweet victory instead of bitter, nasty defeat! Whew. Excuse me. So. I made a mocha bundt cake. It came out very well. I am most pleased. The recipe said it was a "chocolate pound cake", but when I made it it has a distinct coffee flavor, so I'm calling it mocha. Where did this recipe come from? It came from a cookbook that was a Christmas present from my lovely sister Debbie. Yes, I opened it early. I'm an adult, I can do that if I like. Besides, it wasn't wrapped, just in an Amazon box. So there. Nyah. It's called Bundt Cake Bliss, if you will. 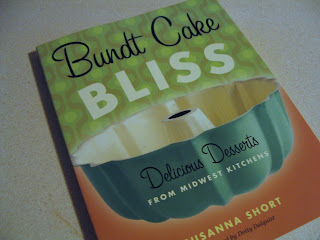 If the rest of the recipes are this good then it is well named. She also sent me a couple new bundt pans. This is the large one. 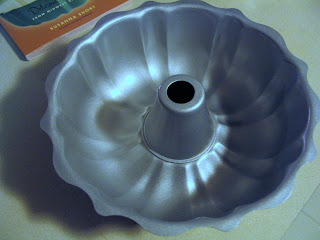 You know what that means? Goodbye crappy, crappy silicon pan! 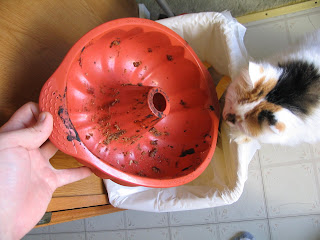 Noodles helped me throw it out, wasn't that considerate of her? I've only used the large one, but it worked so much better than my old silicon one. Thanks Deb! Ok, cake time.

First thing I did was mix up my dry ingredients. Flour, 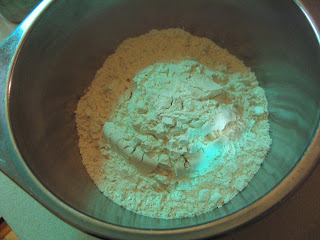 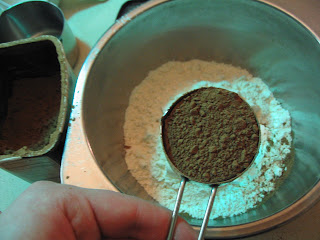 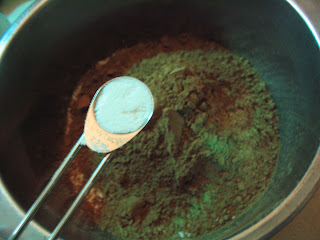 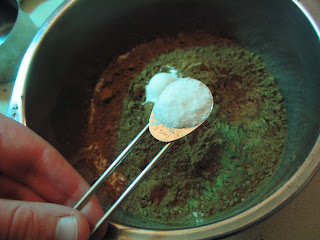 I used a lot less salt than it called for because all I have is salted butter. I probably could have gotten away with not adding any extra salt, but I put in about a quarter of a tsp or so. I put those aside 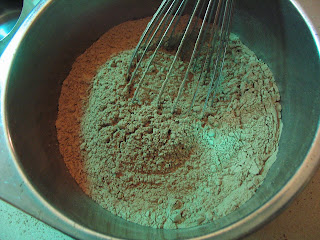 and moved on to my butter and sugar. 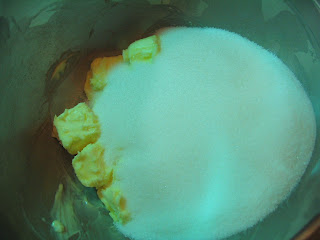 I figured since this was a special occasion I would break out my hand mixer and do this up right. 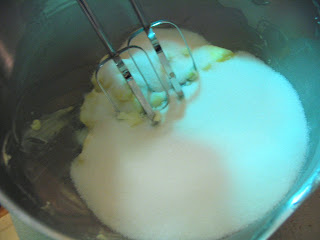 Which reminded me why I never use that thing, it's hideously underpowered. It makes horrible noises while fighting the softened butter. But eventually it did the thing. 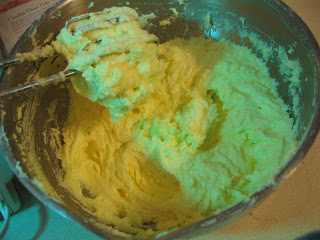 Then, eggs. Five of them, one at a time, 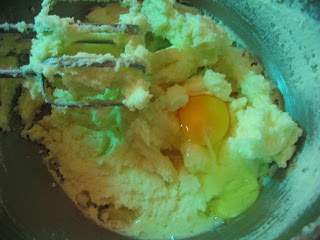 beating each one in. 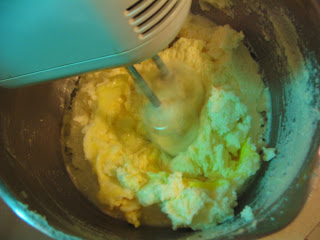 I'm not showing each egg addition, I really didn't want to wash my hands between each one and I wasn't about to handle the camera with raw egg hands. Don't forget the vanilla. 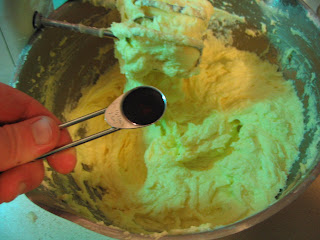 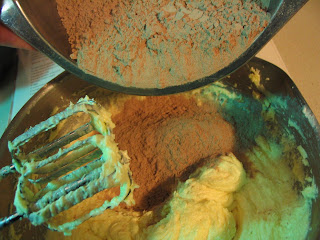 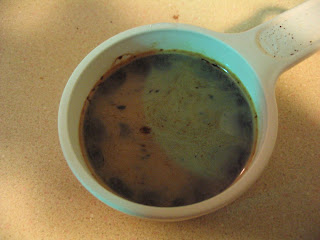 (I didn't get a vaguely decent shot of adding the coffee. Sorry) 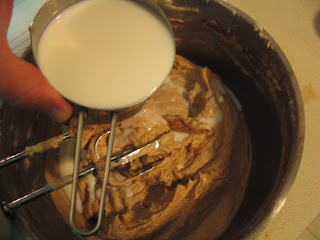 repeat till they are gone. This recipe didn't specify ending with the dry ingredients, but I did anyway. Can't hurt, I'm guessing. Mix it up thoroughly. 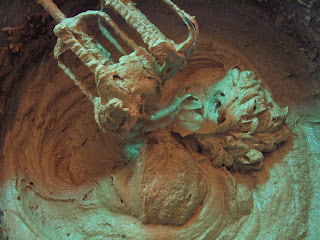 Mixers make weird designs in batter. This one looks like an octopus. 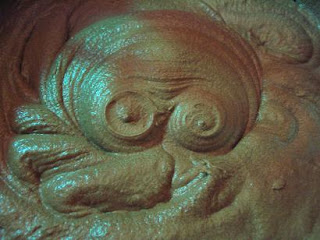 Or Cthulhu. The batter is pretty tasty, by the way. 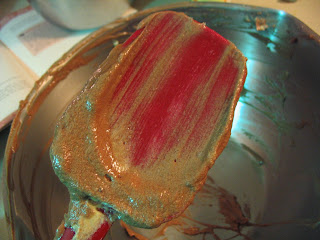 Next I went and poured Cthulhu there into my prepped bundt pan. 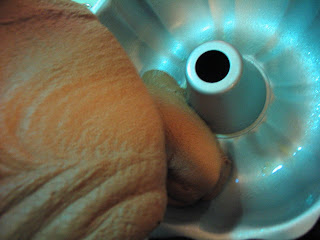 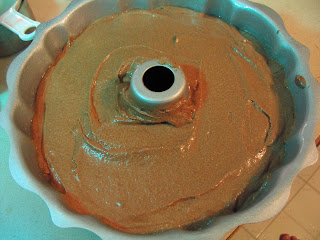 This time I didn't skimp on the cooking spray. Not even a little bit. Once it was in the pan I popped into the oven. After an hour I pulled it out, checked it for doneness and let it sit. 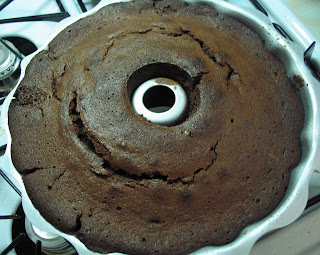 The cookbook says to never let a bundt cake cool for longer than fifteen minutes in the pan so after fifteen minutes I turned it out. Cue the angelic choir and dramatic lighting... 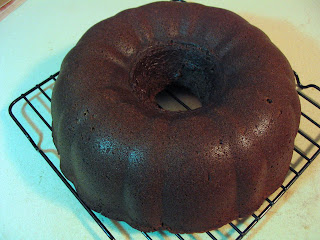 it's all in one piece. Just like on tv! Didn't feel like making a glaze or frosting, so I just dusted it with powdered sugar. Made a couple stencils to amuse and delight my girlfriend. 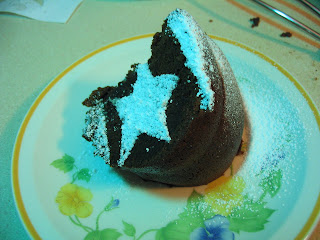 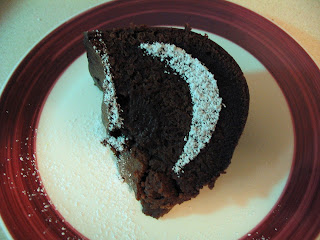 So this cake was really good. Rich and moist (partly because it could have stayed in the oven for a couple more minutes, but whatever. Once it cooled it was just fine) and with a great chocolate flavor. The coffee isn't overpowering, but like I said it's very present. My girlfriend wished it was a bit sweeter, but I thought it was fine just how it was. All in all I will be making this again. Probably once I get through all the other recipes in that cookbook. Heh.
Email ThisBlogThis!Share to TwitterShare to FacebookShare to Pinterest
Posted by Bob Labels: baked goods, chocolate, dessert at 12/19/2008 12:06:00 AM

Hooray! I'm glad you liked the book and pans. :-) The cake is beautiful and looks very tasty. There is nothing like that feeling when something comes out of the pan all in one piece.

I like the batter octopus and that Noodles made an appearance too!

Awesome gifts! Your cake popped out of the pan perfectly this time. It does look sooooo good and moist. YUM! I bet your girlfriend loved that special touch with the stencils, really cute.

Deb: That's so true. Before I turned it out my heart was in my throat. I was so excited when it came out perfect. :)

Spryte: Thanks! I keep trying to get the cats in the pictures, but I don't let them on the counter and they never want to pay attention to what I want them to. Especially when I'm holding the camera. Heh.

Reeni: Thanks! Yeah, I was psyched when I opened them up. :)

That is a perfect bundt cake! Glad this recipe worked for you. Congrats on the new pan.

I love deep brown color you got on this cake! Just beautiful and the mocha flavor is awesome.

Thanks Emily and noble pig! After sitting for a day the flavors are even better. :)

oooo that looks so so good! send me some? And you know your photos are getting better and better all the time!

Thanks Jo! Aren't you sweet. (blush) Heh, I'd love to send you some. My girlfriend isn't eating much of it, it's all me! Which is only so tragic, I guess. Heh.