Here's a quickie for you guys. Fried tuna pattys. We almost never have sliced bread in my house. I know, it's kind of weird, but we mostly just eat sandwiches on rolls. Pretty much the only time we have sliced bread is when I want to make grilled cheese. One day I really wanted a tuna melt, but only had some bulkie rolls. So I decided to just fry up a patty of tuna instead and put that on a toasted roll. It turned out to have a fairly different flavor than a normal tuna melt. The browned tuna/mayo also got a nice crispy texture. How did I do it, you ask? Like this.

First, whip up your favorite tuna salad. I like a couple tablespoons of mayo, fresh black pepper, a pinch of salt, some thyme, a little yellow mustard and some dried onion. 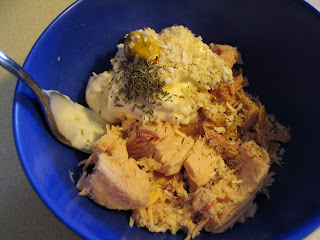 Yeah, dried. I actually like the flavor of the dried onion with tuna. The only time I use fresh onion is when I'm making a tuna/pasta salad. One thing with this method is you don't want it too dry or it will fall apart, or too wet or it will just slide all over the place. If it can mostly hold a puck shape you are fine. 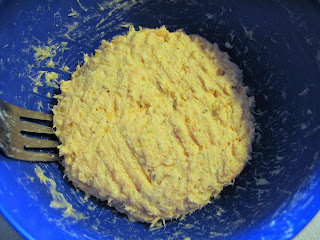 Now preheat a non-stick pan to medium or so. A little fat helps it to brown. 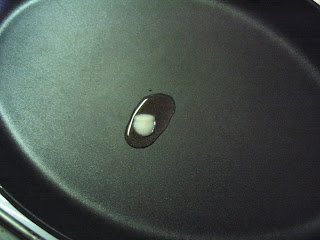 I like bacon grease. Imagine that. Heh. Plop your patty on there. 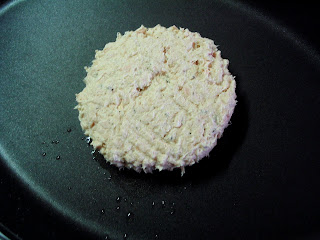 See how it's keeping it's shape? That's the goal. Press it down gently so it's getting good contact, let it sit for a couple minutes, then carefully flip it. You might want to use a spoon to help guide it onto the spatula. Even with a decent crust it's going to move around a bit. 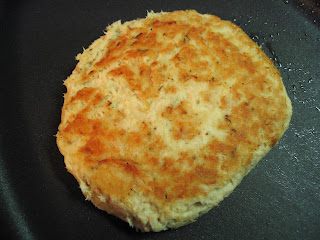 If you are doing two or three cans you could add an egg to it and it would hold its shape much better. It would probably give it a nice texture too. I think with just the one can it would be kind of weird though, so I've never done it. You could also bread it, but I like the flavor of the browned tuna, so I've never done that. Once both sides are brown I suggest covering it with the cheese of your choice. 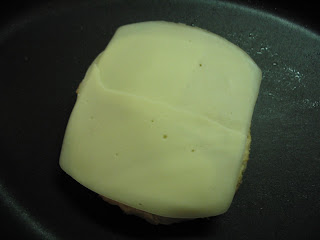 Now you can either cover the pan and let it melt... or put it on the bottom half of your toasted roll and stick it under the broiler till it's browned and delicious. 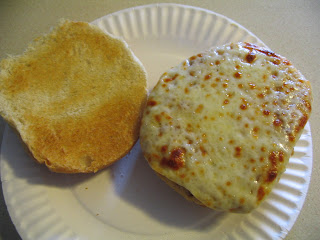 That's how I do it. Then you just put any toppings like lettuce or potato chips on (neither of which I have, mores the pity) and the top of the roll. There you go, browned tuna patty-melt-thing. Now eat it. 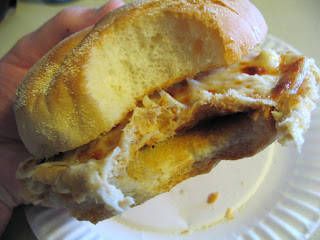 Mmmmm, sandwich.
Email ThisBlogThis!Share to TwitterShare to FacebookShare to Pinterest
Posted by Bob at 12/16/2008 01:22:00 PM

Looks good, Bob. I have always liked dehydrated onion in tuna too. One time, we had run out and Mom got dried toasted onion. It was good, but not the same.

I haven't had a tuna patty in years, now I'm craving one!

When I first read the title I thought it said party not patty and I'm thinking what an interesting party theme but there was no party, just a patty...and it sounds delicious.

This looks incredible! I am so hungry and would love this for dinner!

Brutal: Yeah, I remember that. It's not the same at all.

Vicki: Heh, I just got home from work and I'm craving another. :)

noble pig: Thanks! That would be a weird party...

Jenny: Thanks! If you weren't across the country I'd make some for you and your family. I don't think they'd ship well though... ;)

Spryte: Let me know how it turns out.

I don't know if I've ever had a tuna patty. But I love tuna melts so it's pretty safe to say I would like this. Have you ever turned a roll inside out? Make the inside the part you grill and put the cheese on the outside that has now become the inside. Make an inside out grilled cheese. I've done this in times of desperation. You can smoosh down the puffy part of the roll first to make it more bread-like.

Reeni: You mean I'm not the only one who does that?! Awesome! No more hiding in shame for me! :D I've also done "oven-grilled cheese" where I broil a roll to toast it, slap on some cheese and melt it, then squish it down a lot to flatten. Can't decide if that makes it classier or just weird. Heh.