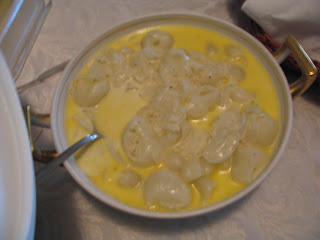 1. Peel as many small white boiling onions as you want
2. Cover with water and boil until soft
3. Drain
4. Return onions to the stove with butter and heavy cream
5. Boil to thicken a little.
6. Season with salt & pepper.
I don't have any specific amounts that I use, as this is a recipe handed down from many generations back. It is also very forgiving - as long as you don't completely under cook or over season, it comes out fine! They are especially good leftovers - pile them on top of a bowl of mashed potatoes... yummmmm :)

So there was at least one request for this recipe in my Thanksgiving post and since I have a few prep pics (and my sister in law posted the above recipe for it) I figured it could get a post of its own. Now, to be honest I'm not the biggest fan of this dish. I love the flavor, but the onions get really soft from all the boiling and I'm not a soft veggie person. But, mixed in with mashed potatoes, as Kaje suggested, its not as noticeable. And is wicked good. I also like ladling the oniony cream over turkey. That's wicked good too. So, here you go. Creamed onions.

First, you need to peel the onions. And ignore my brothers band aid. It's just to protect a small cut from the onion juices, nothing gross got in the dish, I assure you. Just cut the ends off, 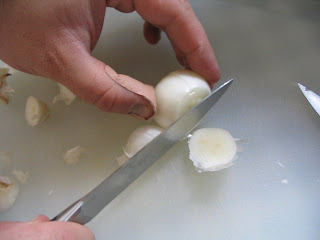 peel off the skin 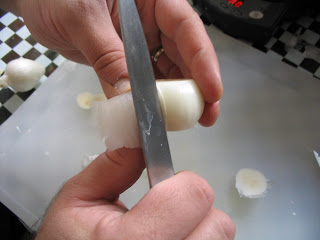 (or the whole thin outer layer) and there you go. 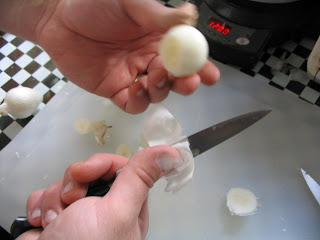 Now repeat it a million times! 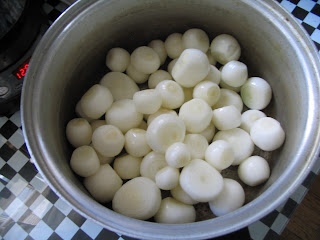 This is seriously my least favorite thing to do on Thanksgiving. Me and my brother usually do it together to make it done faster. He also sets up a fan to blow across them so the fumes don't completely blind us. Which is nice. Once that's done, toss them in a pot, boil them till they are soft and drain them. Then comes the cream and butter. 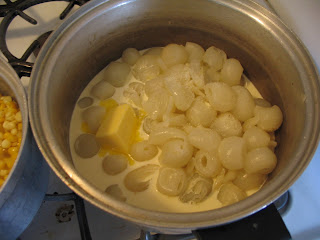 Mmmmm, cream and butter. And salt and pepper. Boil them for a bit to thicken, but note it will never really mix together. The butter will kind of float on top. Tragic, isn't it? Heh. But then you put them in a tureen (uhm, I think it's a tureen...) and serve them. And take a blurry picture.

Email ThisBlogThis!Share to TwitterShare to FacebookShare to Pinterest
Posted by Bob Labels: side dish at 12/01/2008 01:22:00 PM

Yum! I bet these would be great on just about anything. Like the meatloaf I'm having tonight, and the leftover sweet potatoes! Thanks for posting it. Can't wait to try it.

oooooh, I remember when MB brought these to Thanksgiving at Mom and Dad's that time I was home for it...mmmmmm.....I'm not a big soft veggies fan except for onions. I love 'em soft. And buttery and creamy. Mmmm....

Never had creamed onions before, and we love onions! Thanks for this recipe.

Reeni: Yeah, it would be good on meatloaf, I'm sure. Let me know how it turns out, if you try it. :)

Deb: Heh, yeah I remember Dad being particularly fond of them. So out of character for him.

Duodishes: You're welcome! If you try it let me know how it goes.

This was always my grandfather's favorite dish at Thanksgiving! They look good!

I've never had creamed onions before, but I think I'd like them mixed in with the mashed potatoes.

Or maybe I have had them. I think we used to eat creamed peas, potatoes and onions.