Baked Kneophla: Bacon, Cream and Potatoes. What More Do You Want? 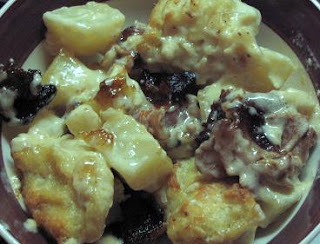 Make a stiff dough using the egg, salt, milk & flour. Put potatoes in boiling water; add kneophla (dough) into the boiling water too (bite-sized pieces about an inch or so), cook until potatoes are soft; drain well. Meanwhile, brown onion. Cut in 1-inch pieces of bacon, brown to desired crispiness; drain well. Put all the ingredients in 9x13-inch pan. Pour cream over the top. Top with browned bread crumbs if desired. Bake at 350 degrees for 1 hour.


Snow. We have it. This is the view from my bedroom window. 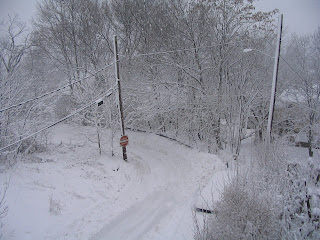 It's much nicer than this view. 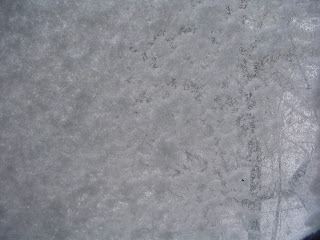 That's from my bathroom window. You know what this weather makes me want? Hot gobs of bacon and cream. Fortunately a Bakespace buddy came though with the perfect recipe. This one comes from Kayla over there, she got it from her German great-aunt. It's some serious comfort food. Dumplings (kneophla, however you pronounce that), potatoes, a little onion, bacon and cream. Baked. That's it. How good does that sound? I think the only change I would make to this recipe is seasoning the dumplings a bit, maybe even with just a little pepper. But you can always grind some pepper over it at the end, so it's not even that big a deal. So, let's do this thing, shall we?

First you need to get your taters going. Peeled and cubed, in water. 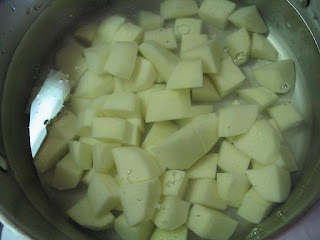 I know you are supposed to start potatoes in boiling water, but I almost never do and they always come out fine. Anyway, once that's going you need to whip up the kneophla dough. Mix together the flour, salt, milk and egg 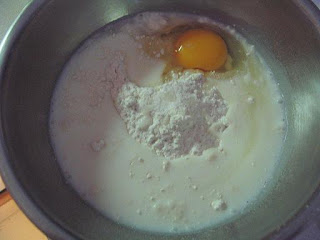 till it's a stiff dough. 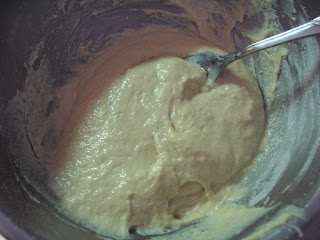 I just scooped up dollops of it with the fork 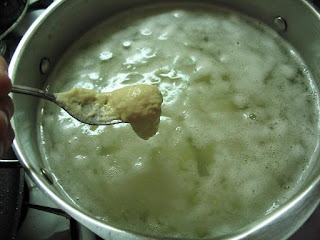 and scraped them off into the boiling potatoes. They wound up being fairly big, but whatever. They were good. Now, while that's cooking brown up your sweet, sweet bacon. 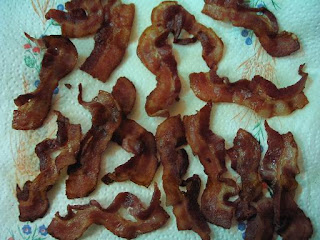 It took me an unreasonable amount of time to cook a pound of bacon, but man, was it worth it. I need to find a faster way I think. Maybe the oven. Also brown up your onion. I did it in a little leftover bacon grease, because, well, why not? 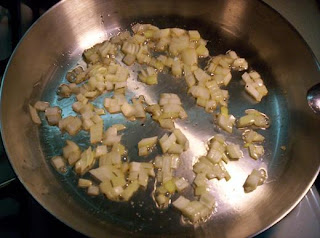 Yes, that pic is from another post. I thought I had gotten a decent picture of the browning onion, but they were all blurry. Hey, this is one of the reasons I keep all these pics. Anyway, once the potatoes are cooked you want to drain them. I figured the kneophla were done since they were all floaty. 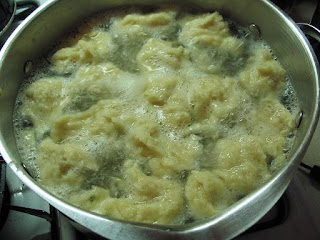 Now mix everything together in a pan. 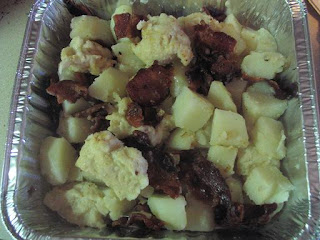 The original calls for a 9x13, but I wanted to see how well it froze so I did two 8x8s. I'll update this post with the freezing experiments results when I defrost it. Now cover it with cream. 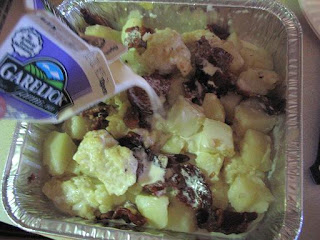 I found it helpful to laugh manically, kind of like a 50's era mad scientist, while doing this. Seemed to make everything come together better. Next you just toss it in a 350 degree oven for an hour. It comes out looking all fantastic and delicious. 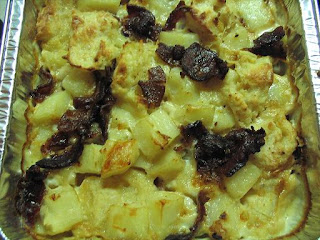 Kayla says some people top it with bread crumbs, but I liked the browned potatoes and dumplings so I'm glad I didn't. 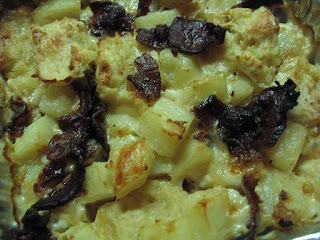 There you go kids, baked kneophla. Not even a little healthy, but unbearably good.
Email ThisBlogThis!Share to TwitterShare to FacebookShare to Pinterest
Posted by Bob Labels: bacon, comfort food, potato at 12/21/2008 01:56:00 PM

To quote Johnny's favorite thing to say lately: Oh...my...goodness.
Dad has to see this. Oh my. I must make it. Now. I have all the ingredients...we will either have it tonight or tomorrow, depending on how fast I can get bacon to thaw.

Oooh, that looks GOOD! Unfortunately, I'm not leaving the couch during this stupid snow-rain-sleet-ice storm going on now, or I'd totally be at your door to help you eat this.

LOL! I love your admission that it's not even a little healthy. Sometimes we all deserve a little unhealthiness on our plates.

Kaje: Lol, well we have some in the freezer. We could arrange to have it sometime when you are around.

Maris: Heh, I think any claim that it was even slightly healthy would have gotten me arrested. I agree that a little indulgence is important now and again.

Bob,
What are the origins of baked Kneophla? is it Greek?
It looks decadent and delish, whatever it is!
Happy Holidays
Stacey Snacks

Stacy: It's German, I think. Decadent is the perfect descriptive for it, too. :)

Oh seriously how decadent, a serious dish of potatoes...I'm a potato ho so this is for me.

Sharon: Thanks! It was very tasty, I think I'm going to be breaking out the frozen one earlier than I had meant to. :)

noble pig: Thanks! heh, I was thinking of putting this in for the Potato Ho thing, but since it's not my recipe I figured I'd better not.

What a fabulously rich and tasty potato dish! I love it. I want it. It's OK to indulge for the holidays, right!?

Reeni: Thanks! And absolutely. Also when you are sick or feeling down or when it's really cold out or whenever you can think of a good enough excuse. At least, that's how I get down. :)

YUM! We made this yesterday morning and it was very good!

Bakingblonde: Awesome! Glad you enjoyed it. :)

bacon rocks! bacon and taters--always a perfect combo.
I'm sorry I do not share in your admiration of the snow....I am so ready for summer. I like the view from my bathroom window in the summertime with the cricket sounds cranking away.

Dawn: Yeah, bacon and potatoes are one of the best combos. Heh, I won't try to force my enjoyment of snow on you. I know not everyone enjoys the cold like I do. Hell, my girlfriend thinks I'm nuts. :)