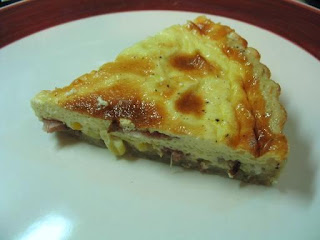 
Mix flour and salt. Beat oil and water with whisk or fork to thicken. Pour into flour and mix with fork. Press into 9" pie crust. Fill with quiche mixture and bake at 400F until done.

Ok, this was my very first time making a quiche. And I re-learned a valuable lesson. Just because something gets good reviews on the internet doesn't mean it will be good to eat. This crust sucked. I hate to be so harsh, but it really did. It just tasted like olive oil and made the whole quiche taste funny and greasy and was wicked squishy. Not what I was looking for at all. If I had replaced the olive oil with butter and prebaked it a bit it would have had some promise, but I think next time I might just make pie crust (what I was trying to avoid, for time reasons) and have done with it. It's also possible that I did something wrong, it sure wouldn't be the first time. Heh. I got the crust recipe from Recipezaar and it's the first time I've gotten something I didn't like from there. Oh well, it's bound to happen eventually. The egg part was good, but very soft. I seem to remember quiche being a little firmer. Next time I think I will cut the cream down and add another egg. But here is what I did anyway, you know, for educational purposes.

First I made the crust. Flour, salt and I also added some mustard powder and black pepper, 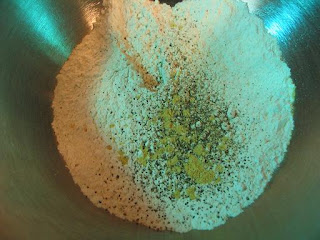 but you couldn't taste it at all in the final product. Then I whisked together the water and oil 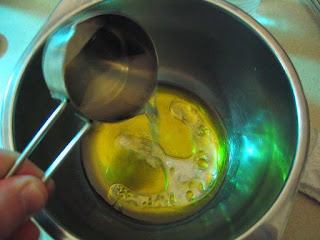 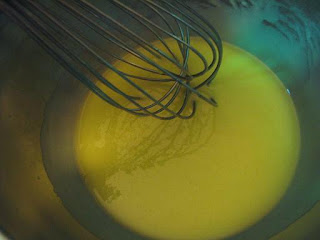 Mixed it all together 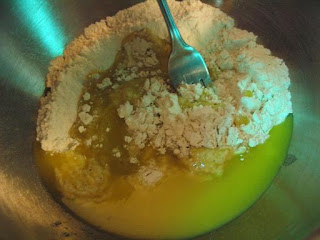 and got a chunk of dough that was pretty easy to spread out into my tart pan. 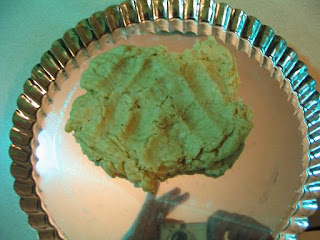 I finished off shaping it with a glass. 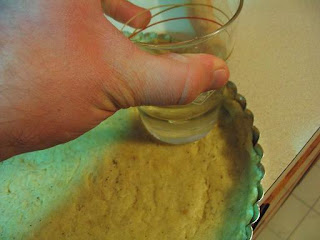 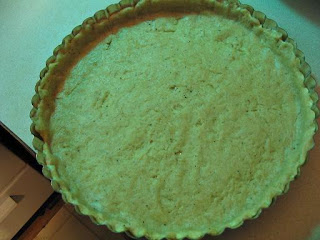 Then I grabbed the cup and a half of cream. 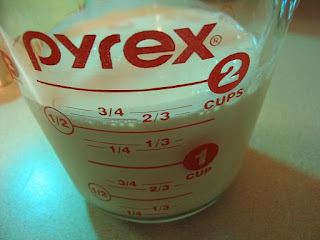 Shuddered a bit and added the salt, pepper and eggs. 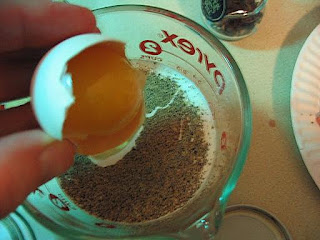 Then I realized there was no way I could whisk it in the measuring cup so I poured it into a bowl and whisked it in there. 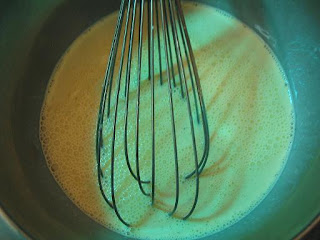 Added the ham and corn, mixed it around 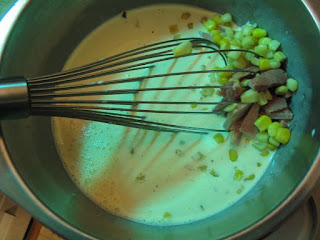 and poured it into the shell. 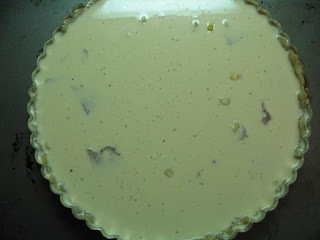 Baked it at 400 for half an hour or so and there it was. Looked good, although I don't know if quiche is supposed to brown so much. 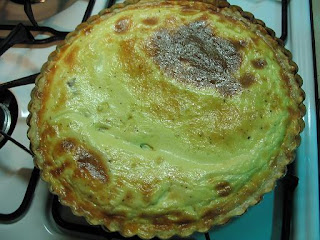 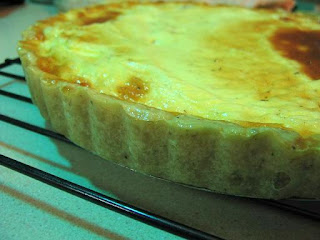 But it made the whole thing taste like olive oil and pretty much nothing else. So I might try it again with butter instead of olive oil if I ever need a quiche wicked quickly, but next time I think I'm just going to make a pie crust. Or use phyllo. Spryte suggested over at Bakespace using slices of muenster cheese for the bottom. That sounds good too. I'll do one of those, and before too long.
Email ThisBlogThis!Share to TwitterShare to FacebookShare to Pinterest
Posted by Bob Labels: eggs, fail, ham at 12/30/2008 04:55:00 PM

Sorry it didn't come out well... here's the muenster quiche my mom made (not her recipe)...

Well if you didn't tell us you hated it I would never have known. It looks perfect!

Spryte: Sweet, thanks! I just love the idea of an all cheese crust. :)

Sorry it sucked but I probably would have eaten the whole thing...I'm crazy like that.

It does look really good in the pictures. I'm sorry you didn't like it! Muenster cheese on the bottom sounds awesome.

noble pig: Heh, we actually wound up scraping out the egg part and eating it like the richest scrambled eggs you've ever had. :D

oh that bites, but hey, it was your first one so....
the first pic looks like it tasted ok. was the middle ok?
use butter next time around

Dawn: the main problems were the bottom was really squishy and it only tasted like olive oil. It just wasn't a good crust. Next time is butter. ;)

Ohhh. I'd be all over this quiche!

Your crust LOOKS beautiful...sorry it didn't turn out!

The browning is entirely appropriate, but for the love of dog, man, why didn't you call me to talk about the crust!? Replace the olive oil with melted shortening and you will have a much more flexible pastry. Butter is fine too, of course, but for quiche I like a more neutrally flavored crust. By the way, when did you get that kick-ass tart pan?

Mom's quiches were always actually quick quiches, with bisquick and a self-forming crust. That is why you remember them being more solid. A proper quiche should be more custardy than bready (I feel free to invent words. Object at your own peril.)

Joy: Thanks, this is one of the times I wish you could judge a book by its cover.

Brutal: Uhm, I did talk to you about it. You said it was worth trying. :P I actually don't remember mom ever making quiche, the only times I've had it were in restaurants. I could just be remembering it wrong or mixing it up with something else. I got the tart pan a while ago, been meaning to make quiche with it for months.

Thanks Anon. It does look good, it just doesn't taste good. Sigh.

Stacey: See, I think I would like that one better, texture wise, than the one I made. It sounds like it wouldn't quite so soft. Looking forward to your post. :)