Something Else to Do With Leftover French Fries 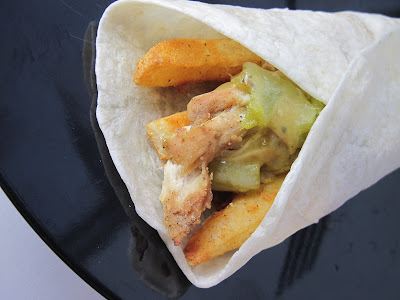 Ever find yourself with just a handful of fries leftover, either just a couple left in the bag of frozen ones or a few left after a meal? Well, keep them, there's tons of stuff you can do with them. You could mix them up with some egg and make a fry patty. They're also good in omelets (or scrambles). Or you could do this.

Crisp them up a bit in the oven, unless you like soggy fries. 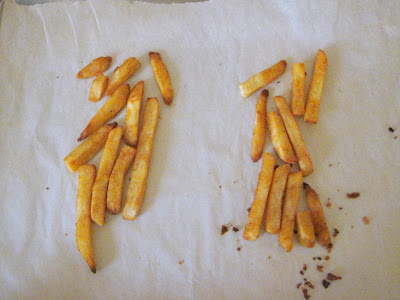 Don't scoff, I know people who do. Make a couple small piles, depending on how many you have. Top them with some stuff. 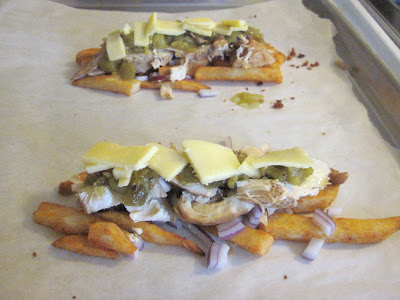 This is some chunks of chicken that were braised in Mexican spices, leftover from the green chili chicken and bean enchiladas I made a while ago, some red onion, some more of those roasted green chilies and some cheese. But really, anything would work. Sloppy joe meat, jalapenos and cheese or chunks of sausage, peppers and onions. And cheese. Chunks of hamburger, tomato, onion, bacon and bbq sauce. And cheese. Whatever you can think of and fit on top. Although I do suggest cheese, it kind of holds everything together.

Toss it in a hot oven until the cheese is melted and it's all heated through (having the fries already hot speeds this up). 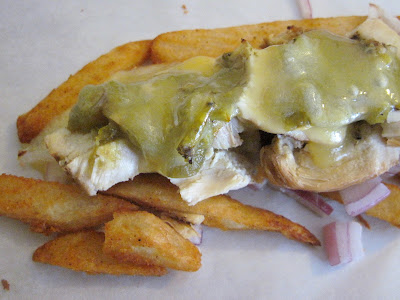 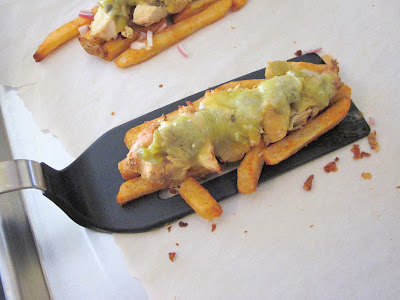 If not, you can just use two or cut the pile in half. 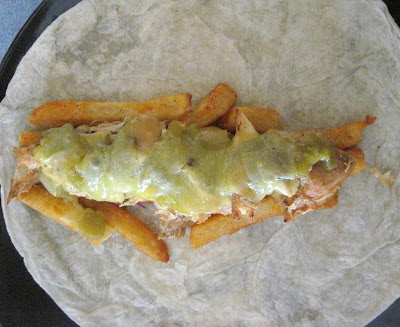 Then just roll it up in a tortilla and eat it. 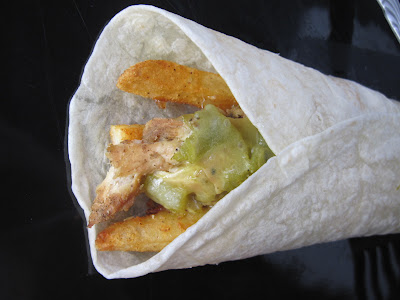 There you go, two different chunks of leftovers gone, the fridge a little cleaner and an awesome meal made, all in less than a half an hour. Not too shabby, if I do say so myself. Heh.

So, what would you put in one of these?
Email ThisBlogThis!Share to TwitterShare to FacebookShare to Pinterest
Posted by Bob Labels: cheese, chicken, leftovers, potato at 4/14/2010 10:53:00 AM

Me and My Pink Mixer said...

I never have leftover french fries - ha ha. Maybe I'll have to save some next time because your wrap looks delish!! Great idea!

Looks a creative way to make good use of them - I'd definitely eat that.

This reminds me of those stuffed sandwiches that has everything including the fries. This a great version for those who don't want all the bread.

Carbs on carbs. Have to say. It sounds awesome.

There was this Californian burrito that I used to love when I lived back in Idaho going to college and they stuffed french fries in the steak burrito and it was the only burrito that I really liked! :)

I have a bag of leftover fries in the fridge...good work my friend.

Well, it's a super idea IF I ever had any leftover fries. Never happened yet, but you can't tell!

This is an incredible use of leftovers!

You are an evil genius! Although I, too, never have leftover french fries! haha.

Now we're talkin. I just got a beautiful batch of New Mexican green chilis and will try this for sure. Thanks, Keri (a.k.a Sam)

I love waste not want not people. Thanks for the tips. We really don't have leftover fries here - the gang eats them faster than they can be made :-). I really enjoy your blog, Bob. I hope you are having a wonderful day...Mary

LoL, this is such a guy post! Great idea, I usually never take fries home as leftovers. I'm obsessed with fries dipped in honey mustard!

P.S. I hear ya on the seasonal food thing; I'm in Montana!

This is just so creative love it and love those fries too! Now I will have to make sure there are some leftover fries! Yum!

Clever idea, I never know what to do with the leftover french fries.

Oh! Very creative...now I think I want to have extra French fries :-)

So clever and tasty! I love using up leftovers like that.

you should sell this idea to McDonald's and retire! They look good!

This looks incredible Bob! Wow, and I just made french fries last night! Guess I know what I'll be making... :)

o YUM! i'll take 5! what a good idea for those last few french fries! (and other leftovers for that matter!)

Oh man, those look so good! So good,t hat i may need to get fries later, eat most--but save some. For something just like this!

AWESOME idea! I love it. You are a clever cooker, sir!

Only you could come up with such a creative left-over fries!

I have some leftover haitian style carnitas that are begging for some fries!

If you love something and it came in front of you it completes your day and your mood turns into something you won't expected. I love your work and I want to read more about it. Visit my site if you have time . Thank you.