A Sandwich of Substance 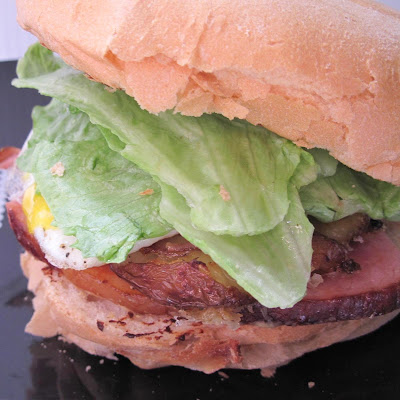 Want to know what's in it? Ha! Did you think it would be that easy? That I'd just tell you? Well, I'll do better than that, I'll show you. 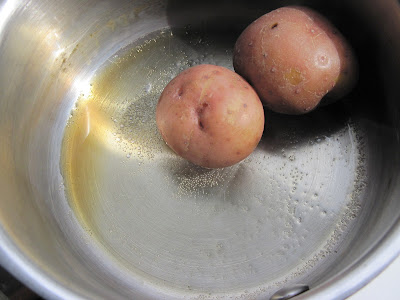 If you look closely, you'll be able to tell from that picture that I'm an idiot. I completely forgot about my little potatoes boiling in my little pot and they ran out of water. Heh. Fortunately crash hot potatoes are very forgiving and that is what we're making with these. 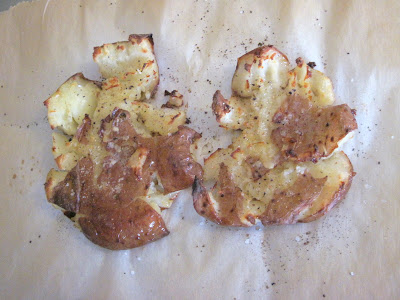 See I had just those two 'tatoes left and I couldn't think of a better use for them. Next you fry some ham. 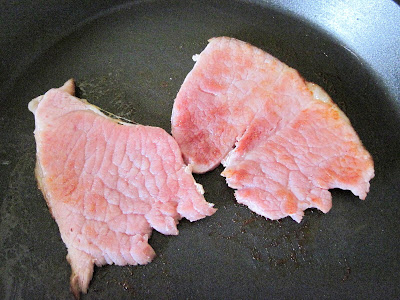 You could use deli ham, but this is leftover Easter ham so it's nice and thick and smokey. Good times. Then you toast a nice, big, soft roll in the same pan. 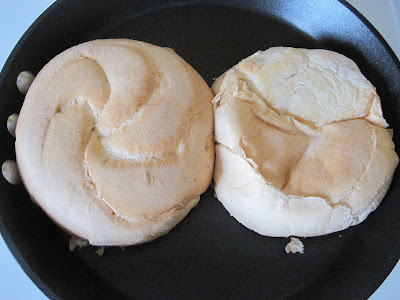 So far so good. Now we fry an egg and saute some onions. 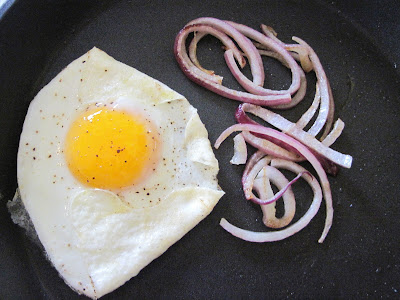 At some point the potatoes are going to be almost ready, so you need to pull them out and put some cheese on there. 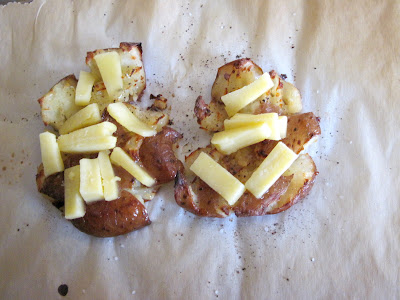 Whatever kind you like, I used cheddar because that's what I had. Pop them back in the oven to melt it and we're ready to assemble. First, a little mustard, because mustard is good with all this stuff. 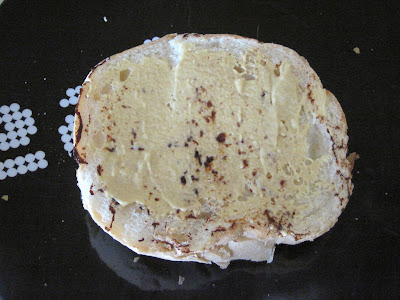 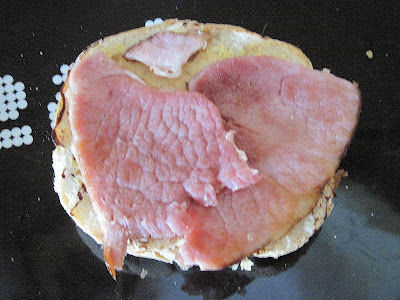 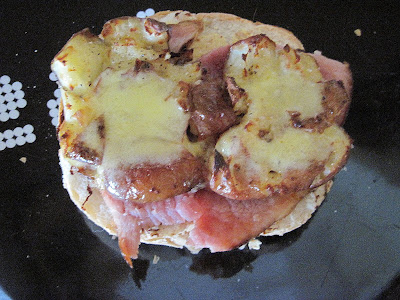 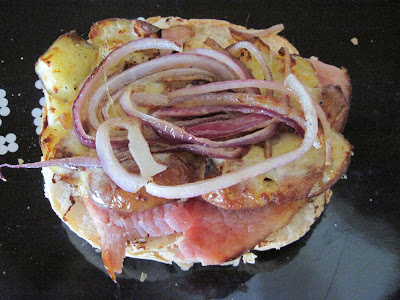 Next the egg, with the yolk broken and swished around. 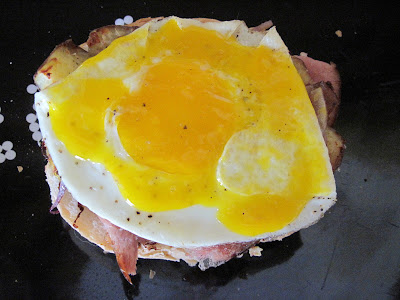 That's an important step. And now some lettuce. 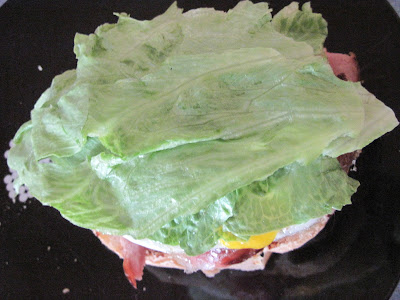 See, not only does lettuce add great texture, but it has such a low calorie content that you actually burn more calories eating it than you get from it. Or so I've been told. Which means when you add lettuce to things you're actually taking calories away. I'm sure there's a study somewhere verifying this, but I'm a busy man and don't have time to look it up.

So there you have it, a big ol' sandwich. 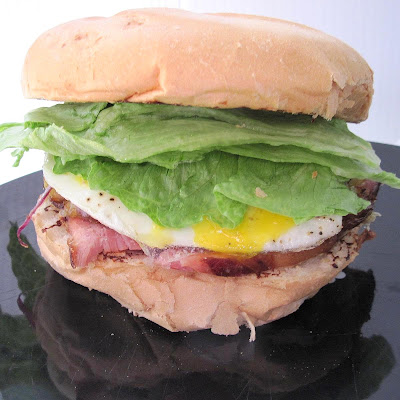 The only problem I had was I have no idea what to call it.
Email ThisBlogThis!Share to TwitterShare to FacebookShare to Pinterest
Posted by Bob Labels: cheese, eggs, ham, onion, potato, sandwich at 4/09/2010 10:05:00 AM

That is some serious man-food right there, although I wouldn't pass it up. Looks heavenly.

Looks good - I wish we had bought a ham for Easter.

Oh does that ever look delish!!

Looks good - I'd call it a breakfast sandwich :)

I'm loving this big ol sandwich big time. This is a keeper.

This sandwich is serious. I love the intensity of it. And that bit about the negative calorie lettuce. Made me laugh.

It's sort of like an Eggs Benedict sandwich...sorta...? Or how about "Easter Leftovers Sandwich"?

That is just an indescribably beautiful sandwich!

and i love how you love your sammies. kicked up sammies that is

Excuse my while I wipe the drool off of my keyboard - this sandwich looks fantastic!

Goldie: Hm, a little Hollandaise wouldn't have hurt. Next time it will be a benedict sandwich!

these are absolutely delicious...

Hullo Happy Sunshine pal, its GOrgeously spring ,blue skies and summer hues, we are so happy and with this happiness lets JOin the Party ,for dear CHaya 's BIRTHDAY.[10th april]..yeah its a suprise party for her....and she's ur pal too....
and all u need to do is hop at the link below and leave her a birthday message and link any or all of ur deliciousness u wanna bring to the party.....looking foward to u ....at the party and CHaya ...is going to love having u over .......
ANd if possible please send this message atleast to 5 of ur bloggin buddys , we so wanna make her day dont we....

come to the party ....ur presence n love will make the difference.....

to bring the joy of the gorgeously stunning Springtime right here http://brightmorningstarsfoodie.blogspot.com/2010/04/hugs-n-love-suprise-party-for-u-dear.html

OH WOW! This is one AWESOME sandwich! This is what I want when I think 'sandwich!'
Have a great weekend Bob!

That is truly a beautiful sandwich, mon frère. The egg just takes it over the top.

You have never made hollandaise, have you? We can make some together soon, and then will will build a sandwich with a force power OVER NINE THOUSAND! (*insert evil cackling here*)

Aside: can I just say how amusing I find the image of my avatar kitten in particular making almost-dragonball-z references?

Very. Very would be how amusing I find that.

That sandwich looks good. Is that "the usual amount" of lettuce?

A sandwich of substance indeed!!! I love the runny yoke in that.

holy crap. that is definitely a "big ol' sandwich". i love that runny egg in there. but you already had me at the smashed potatoes. droooooool.

OMG - you're a genius. Your crash hot potatoes in a sandwich (I say this with my Ross from Friends voice - if you saw that episode)?!?! Simply amazing.

I have a great name for it: The "Ma! Come Quick, The Pig's Done Crashed Into The Chicken Coop!" Sandwich.

At least that covers the ham, taters, and eggs:)

Very nice wholesome burger you got there...now make another one for me:D

Oh yeah! This is my kind of sandwich! I am loving your lettuce logic! ;D

OMG, this is simply divine! You're unbelieveable! Have a great weekend.
Cheers,
Kristy

Hi Bob...that was a great bun sandwich. Nuritious and looks delicious. Thanks for sharing such a wonderful sandwich...truly a sandwich of substance :))

The food looks delicious. To me it deosn;t really matter what you want to call it, as long as it ends up in my stomach. Keep up the great work with your articles and please stop by my health blog sometime. The web address is http://healthy-nutrition-facts.blogspot.com/.

Wow. That is a real Dagwood sandwich for sure!
Love the way you built it in photos!

Holy cow, now that's a sandwich! I'd like to just call it "mine".

potatoes...on a sandwich. i've seen and devoured subs piled high with fries, but boiled and smushed taters is a new one. i also love the use of the leftover ham and the oozy, amazing egg. this is truly a fine sandwich, bob--amen.

Bob, this is such a great creation! I love sandwiches and can't wait to try this one.

You could call it Bobs Buns of Bounty haha..j/k. just say it's a wicked good, killer, kick ass tasting sandwich and call it day :).

you put the potatoes to good use! really nice sandwich :)

This looks awesome. I'd have to leave the egg out though...

Awesome! I love the potatoes in this sandwich! Yum!