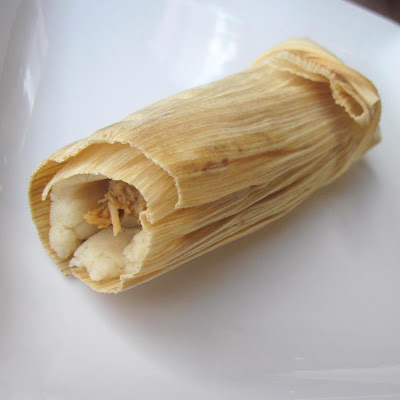 Wow, I've been wicked bad about getting recipes for stuff up here lately, haven't I? Sorry about that kids. And I'm afraid this post is recipe free as well, I just didn't really pay much attention to proportions, it was all done by taste.

Oh, except the masa. I used the recipe here for that, but I subbed out the corn oil for shortening. Most of the recipes I saw wanted lard, but that's really hard to find. Next time I make them I want to use chicken fat, I bet that would be wicked good.

So I've been wanting to make tamales for ages, but I hadn't been able to find corn husks anywhere. 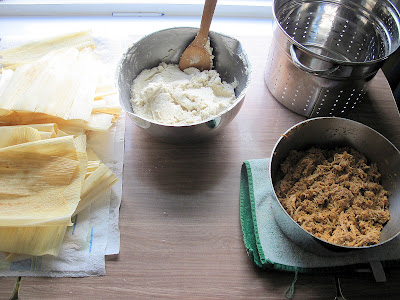 I was whining about this to Girlichef when she posted about tamales and since she is such a wonderful human being she sent me some! How awesome is that? Not to mention the extra treats she sent which I didn't manage to get any pics of... heh. Thanks, Girli! There's a lesson here kids, if you complain enough people will buy you things. 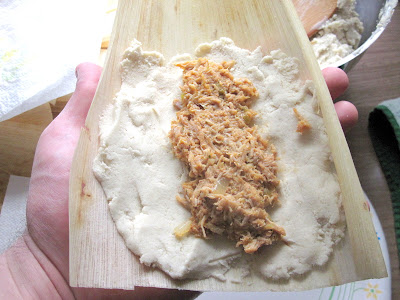 What, that's not a good lesson? Hm. Well, forget it then.

Anyway, corn husks finally obtained, we call up a couple friends and make ourselves some tamales. 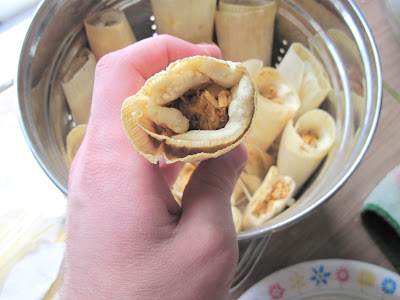 I'm not going to go into a big how-to in this post since I'll be making them again sometime in the near future and will just do a whole series for it. 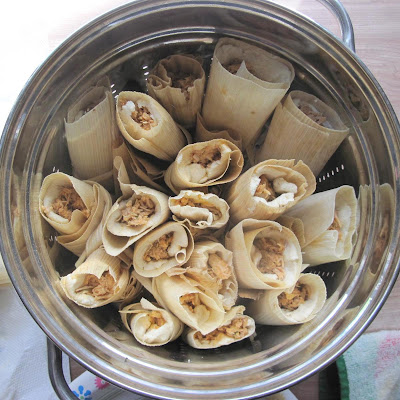 But I did get a bunch of pics, so I figured I might as well do a post about it.

They came out wicked good, although I hadn't realized quite how dense they would be. 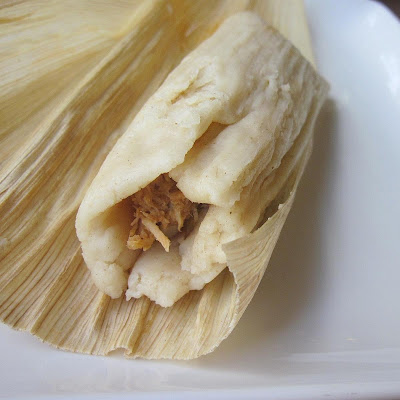 Apparently that's normal, although Alton Brown adds some baking powder to his masa which would lighten up the texture a bit. They came together pretty easy, it's mostly just time consuming, not hard.

So I'll be making these again soon, I'll write stuff down and have a good recipe to post. That's the plan anyway. Heh.
Email ThisBlogThis!Share to TwitterShare to FacebookShare to Pinterest
Posted by Bob Labels: masa, mexican-esque, pork, steam at 4/28/2010 02:10:00 PM

time consuming is true - yours came out really nice!

Yay! Looks like they did turn out wicked good (I can say that even though I'm not from Boston-area, right)!!! Love the moral of the story ;) HA!

LOL! The squeaky wheel gets the oil!
They look GOOD!

Those look great!! The one time I tried tamales it was an all day miserable FAIL!

i have a love/hate relationship w/ these. i love to eat them and hate to make them. lol
so you can just go ahead and make me some. ok?

Tamales was actually the very first homemade meal I had in America.. Can you believe it? I love it. :)

Hey, it's easy to find lard here in Iowa--you can get it by the pound or by the BUCKET in the shortening section. Scary, huh! So when you come for the family reunion you can stock up. HA!

I've always wanted to make tamales but when I come across the husks, I'm not in the mood to make them and when I want to make them, I can't find the husks. Such is life. One of these days...

Girlichef is awesome, as are these tamales!

Wow, these look so interesting. I've never had a tamale before.

this has gone straight to the to make list of mine! They look amazing!

This looks exotic and yummy to me at the same time!

yum yum tamales!! i'm still new to these, but they are delish! (i never understood how to eat it for the longest time - corn husk? no corn husk?) i love how families can also get together and make a whole batch too.

Ok...I so totally need a food processor. Anyone? Anyone? Hmmm....maybe that only works with food.

Seriously, your tamales look great. Yay, Girlichef! I've never tried anything like that. I need to expand my horizons.

LOL!!! I have recently realized how much I took living 12 miles from the Mexican border for granted. Portland is extremely lacking in anything resembling real Mexican food. :(

I will be sitting here waiting to see your awesome Tamale recipe! Maybe it will inspire me to actually make them.

Very impressive! I like the idea of making tamales from scratch but it seems like so much work. Luckily in San Francisco you can buy 'em on the corner from the Tamale Lady.

They look dang good! I haven't had tamales in way too long!

omg....seriously? you made tamales? I'm so impressed! I've been wanting to make them for ages and ages but they intimidate the crap out of me! Way to go dude!

Wow! I always thought that tamales were super difficult to make. This inspires confidence for me to try.

Those look really delicious! You make it look easy. I pass by the corn husks all the time - I need to make these!

Phew..thats a lot of work there. I bet they tasted amazing!!

note to self: complain more. bravo on a task well done, bob--i've always wanted to try my hand at tamale-making, but the plain truth is that i'm too lazy. do you think someone would just out-right make them for me if i complained enough? :)

Those look marvelous! I love them, but I've never made them and probably won't, but this was a super post!

I'm so impressed you made your own tamales - they look perfect!

A) I did them exactly from Alton's recipe, and they were still dense as all get out, to use a technical term.

B) Dense or otherwise, they were wicked good. I gave you a few, didn't I?

C) When you make them next, you MUST call me. Tamales are an awesome group activity :) I have a few pounds of masa...

Recipe or not, these look great, Bob. I have yet to try to make my own. These look so good.