Hamburgers are quite possibly my all time favorite food, I've probably eaten more of them than anything else. 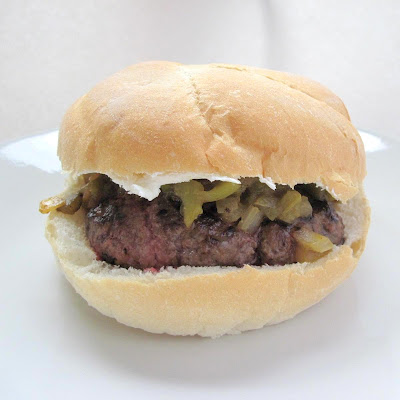 I used to eat one at least three or four times a week when I was a teenager and always had access to a grill. I can remember days when I would eat a burger for every meal of the day. Not the healthiest of diets to be sure, but it does remind me that I need to post my breakfast burger. Heh.

Anyway, burgers are awesome, so when Reeni over at Cinnamon Spice and Everything Nice announced she was starting a Blogger Burger Club I was all about it. The way it works is she's going to announce a burger every few weeks and then people will make and rate it. This time it's green chilies and cream cheese and I just so happened to have all the ingredients on hand. So I made them. And they're wicked good.

The recipe is in the link above, but they're pretty simple. You saute up some onion and green chili or jalapenos and put that and some cream cheese on a burger. 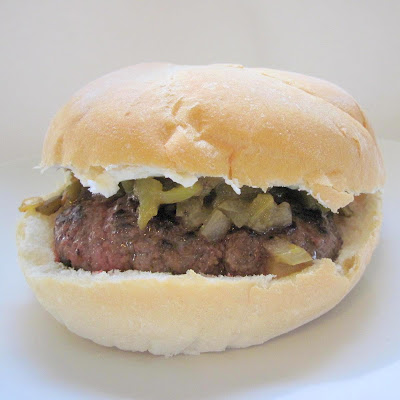 The cream cheese balances out the heat of the peppers and the flavors go really well together. Reeni had used green chilies and wished they had had a bit more heat. I used the same jarred, roasted green chilies I used in the green chili, chicken and bean enchiladas I made recently and they're fairly hot, but I would have liked a bit more oomph myself. Next time I'm going to do half and half green chilies and jalapenos, I bet that would be a good time.

To rate it, I give it three stars. 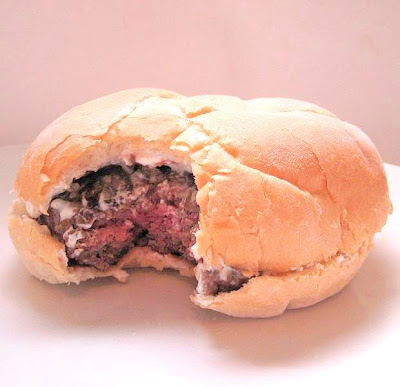 It probably could have had four with bacon. Heh.
Email ThisBlogThis!Share to TwitterShare to FacebookShare to Pinterest
Posted by Bob Labels: Blogger Burger Club, cheese, hamburger at 4/12/2010 12:16:00 PM

Cream cheese burger sounds and looks quite interesting. I need probably another layer though...

Love how simple and yummy those look. Also like the medium rare burger!! :)

Mm, I like the sound of that club. I don't really cook burgers but I certainly like to EAT burgers.

Angie: The more the merrier. Heh.

doggybloggy: Yeah, they are a good time.

CinnamonAndSass: Thanks! Yeah, they are deceptively awesome for how simple they are.

Hungry Dog: Why don't you cook burgers? They're the bomb! You should join the club and cook more of them. C'mon, everyone else is doing it! :D

Glad you tried these! I've been hoping to try a turkey version if I can get around to it. They sound sooo good!

Unusual and delicious sounding toppings for a burger. . .we love cheeseburgers, so why not make the cheese, cream cheese?

i remember seeing that burger. sounds like fun. i think i would love way more heat than anyone else--maybe because my tastebuds are burned from all the years of eating heat. ha ha

What a tasty burger. I've never thought to use cream cheese before on burgers before.

I wanted to make those today with bison but I forgot to get burger buns. Need to make this very soon!

I am doing a happy dance! You're my first rater. Seeing yours makes me want one again. They were pretty darn good. I'm going to do a mix next time too. Thank you!!!

I have a feeling, however, that every burger would get four stars with bacon :P Looks delicious.

I dunno, I'm not a big burger fan.

I might have to sigh up for this one, I love burgers.

cream cheese in a burger...divine

you're the perfect person to join Blogger Burger Club hehe

Man that's a lot of burguers in a lifetime!!! But they can't hurt is they look half has good as this one ;)

I love how the bread just envelopes the burger encasing it. hehehe...

Mmm, this looks scrumptious Bob! I also like my food spicy! Will be trying this soon!

i'm a burger fiend myself, although i typically make the same exact version every time. incidentally, that version includes roasted jalapenos, as well as pepper jack and hot sauce, among other things. i love me some heat. :)
now get crackin' on that breakfast burger post!

I was going to make some burgers tonight but changed my mind last minute. Now I am kinda regret after seeing your delicious burger lol
If you can find mirin, try simmering 2 cups of cooking sake with 1/2 cup of sugar for 10 minutes. The result is quite similar to mirin.

I would never have thought of adding cream cheese to a burger but love the way it balances the heat. Your juicy burger pictures have me hungry!

This burger takes my breath away. I'm on my way to the new burger blogger series.