It's weird, I've pretty much posted my complete pre-blog repertoire of recipes. 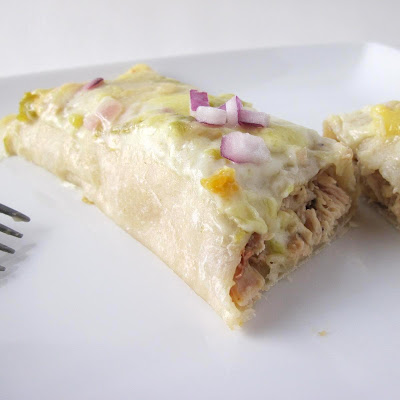 In fact, I ran out of old recipes some time ago, like maybe a year or so. So everything I've posted since then has been brand new to me in one way or another, either I had never made it or never had it. Which is cool since one of my main reasons for starting a blog was that I wanted to force myself to try new recipes, methods and ingredients. Plus it means I have to write my recipes down, which I'm wicked bad at. But it was also my first time making enchiladas and I didn't feel like using a recipe. So, I just kind of made it up as I went along based on my memories of the enchiladas my mom makes.

See my mom grew up in southern California and has a deep love of Mexican food. She makes all kinds of awesomeness, including enchiladas. But she isn't really a recipe person. Well, that's not quite right, she loves recipes and has a substantial collection of cookbooks, not to mention the books of clippings of recipes from newspapers and magazines. But she doesn't usually follow them. She uses them as a guideline and just kind of works from there. So each time my mom would make enchiladas they were never exactly the same.

And since she's the one who taught me how to cook when I want to try something new my first reaction isn't to find a recipe that sounds good and follow it. It's to find half a dozen recipes, pull out what I think sounds good from all of them and see what happens.

Anyway, she has several themes for enchiladas and when I was a kid she would make two or three different kinds at a time. One of the ones she would make was a chicken one with green chilies and a white sauce and it was definitely my favorite. 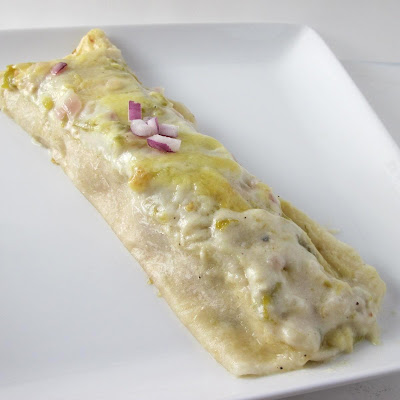 I remember when I asked her for the recipe, I got a fairly typical response to such a request. It pretty much went like this:

Me: Mom, what's the recipe for those green chili enchiladas?

Mom: Oh you know, I cook the chicken with some spices...

Mom: You know, some. More if you want. Then I roll them up, make the sauce, pour it over... 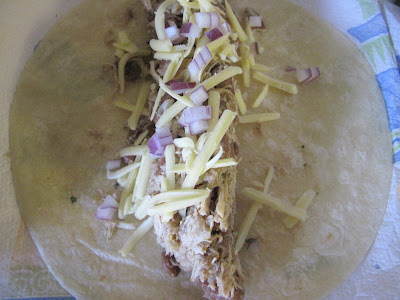 Me: Wait, roll what up? And what's in the sauce?

Mom: Roll up the chicken that you just cooked! Oh and shredded. And some cheese. It's white sauce. With a can of green chilies. 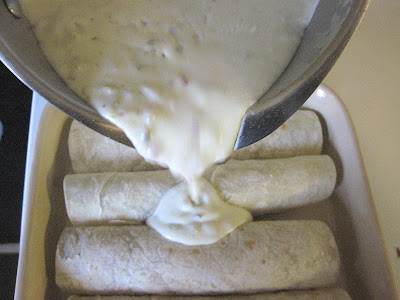 Mom: Then you put cheese on it and cook it. 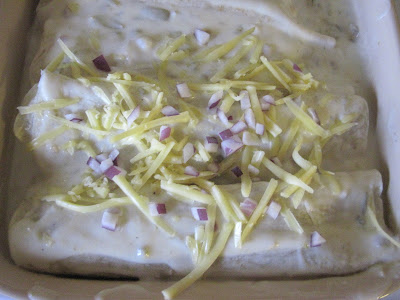 Me: At what temp? 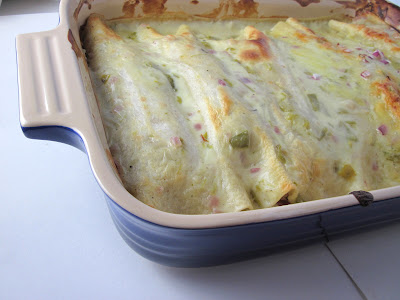 And that's why we don't have that many family recipes. I'm pretty sure my siblings are like that too, although some of us are worse than others. I know I'm wicked bad. One of my sisters called me once to ask at what temperature I cooked a chicken dish (that I make all the time). My response was "... 350?".

So in short my excuse for not having a recipe for these awesome enchiladas is genetics. But next time I make them I'll write stuff down, I promise!

Here's pretty much what I did though. The filling is shredded chicken and beans. I braised the chicken until it was tender with some Mexican spices (cumin, oregano, probably cilantro... stuff like that), onions and garlic. Then I took out the chicken, added a can of rinsed pinto beans and let them simmer, covered, in the braising liquid for a couple hours. Then I added the shredded chicken back in, rolled it up, poured on some white sauce with maybe a quarter cup of some roasted green chilies my brother gave me and cooked it in an oven that was hot, but not too hot. Oh, with some cheese. They were wicked good.

I would also like to point out my awesome new La Creuset 9x13" pan, which I won from Danielle at Cooking for my Peace of Mind, that I made these in. 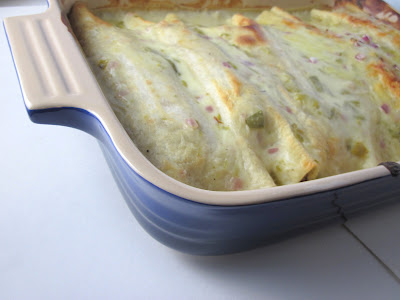 Thanks Danielle!
Email ThisBlogThis!Share to TwitterShare to FacebookShare to Pinterest
Posted by Bob Labels: cheese, chicken, mexican-esque, sauce at 4/05/2010 11:25:00 AM

My parents are SO like that with recipes as well. A little of this, a little of that. You never know what actually goes into the pot.

This looks amazing! Way better than any enchiladas I've ever had. I'm truly amazed.

I will follow baking recipes to make sure the results are there, but for the rest-I too use a recipe as a guideline, until I have it where I want it then make notes. I want to be able to pass down to my girls their favorite recipes when they move out.

The creamy sauce sounds like an icing on the cake...totally comforting and fingerlicking!

Really don't need a recipe for enchiladas and you proved it! These sound really good - love green chiles!

These look wicked good, Bob. Seriously, I could throw down on a pan of these right now. I like the way your mom cooks. Just common sense. But it makes it hard to replicate!

I love the conversation between you & your mom - too funny. The enchiladas look fantastic - love the creamy sauce.

That is exactly the same way I work, too!!! I always change things and make notes as I go along. Ever made something, not take notes, and then forget how the heck you did it?!!

Enchilada goodness!!!! *drool* I usually have a recipe as a type of guideline, then I'll just go from there and mix and match to my tastes.

Man, do these look WONderful. I have a pretty good chicken enchilada recipe which is very similar, but I really need to tweak it to include those beans and some green chili. Mine is just white sauce with seasoned chicken. Thanks for posting this and yes, I have had similar conversatons with my mom and aunts.

That's one great looking dish of enchiladas! I love how your mom "writes" recipes, lol.

Nice Le Creuset pan! The enchildas look fabulous. My parents are the same with recipes.

Your enchiladas look scrumptious in that lovely blue baker. You will get a lot of use out of that for many, many years.

YEAH!! Your pan got there! It's awfully perty :) and those enchiladas look amazing!
Getting a recipe from my grandmother is a lot like getting one from your mom!

My parents grew up in So Cal as well. They used to make runs to the market to wait for the tortilla truck full of fresh torts...those were the days! When I was growing up, enchiladas were my most favorite meal. My mom made her own tortillas. I love this white sauce recipe!

Looks so good with that creamy sauce. Nice job!

This is funny. I actually had a dream I wanted enchiladas and it not something I normally crave when I want Mexican food and now you just made a blog post about it. haha

They look very good but I prefer a red or green sauce. The creaminess might be a bit rich for me!

LOL! Love the conversation between you and your mom! Great looking recipe! :)

Sounds and looks like a delicious way to "break in" a new Le Creuset dish. LOL They look mega-delicious!

If it's any consolation, while my family is pretty good about writing down the amounts, they are terrible at directions. I ended up with tortilla-ish looking shortbread biscuits one time. ;)

That looks divine! Your mom is a great cook; all great cooks play the entire thing by ear. My mother did the same thing..she never wrote anything down. I often stood next to her and wrote it down as she made it. But I still missed a lot of great recipes. I could kick myself.

As far as the old recipes are concerned for the blog, I try to mix new finds or new inventions with the old family favorites!

they look worth the trouble of sorting out the recipe. :-)

I do the same...lots of time it's just grab a handful...a shake of sugar or salt or whatever.....the way our parents cooked!

I love the creamy sauce on enchiladas! Looks so delicious!

your mom obviously knows her stuff, and so do you. enchiladas are a favorite for me, especially when a creamy sauce is used in place of red or green. these look awesome, bob!

I've never made enchiladas with a white sauce before. Looks awesome. I'll have to give this a try. I'm guilty of using canned red enchilada sauce.

That's what happened when I ask my mum for a recipe too, lol. yummy enchiladas!

In Mexico they call this Enchiladas Suizas or Swiss Enchiladas. They rock!