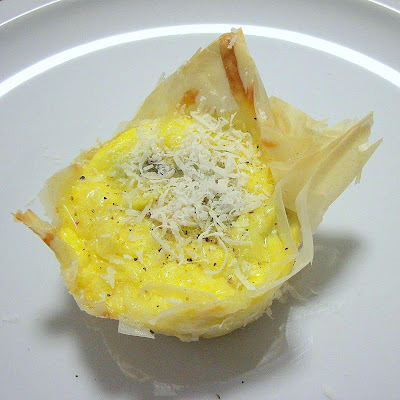 So my brother calls me up the other day and says "Hey, I'm making mini quiches, want to come take pictures?" To which I responded "Of course!"

I mean not only is cooking with my brother a good time in general, but I would be able to use both hands to hold the camera and I wouldn't even have to do the dishes (I'd get to eat some too, of course). How could I not? Heh. So I head over to his house and he has everything all set to go. 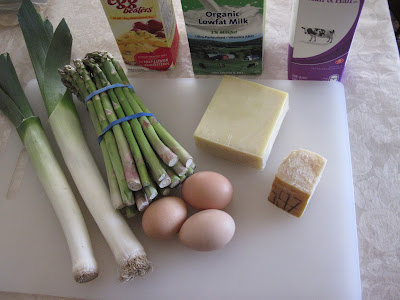 He was making them lightish, so we have a couple eggs, but also some egg substitute, half and half, a little milk, Gruyere and Parmesan. First he prepped and roasted the leeks and asparagus. 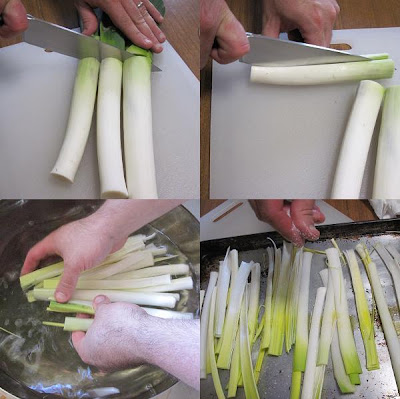 These leeks were extra sandy and wound up coming apart when he washed them, but it worked out fine in the end. 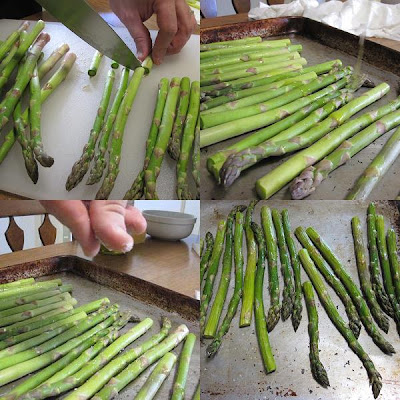 Then it was just grating the cheese, 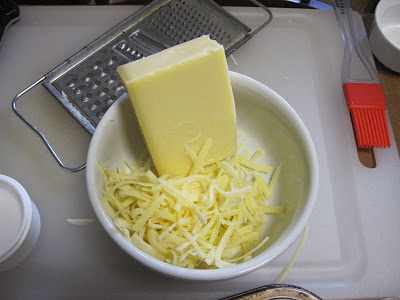 whipping up the egg mixture 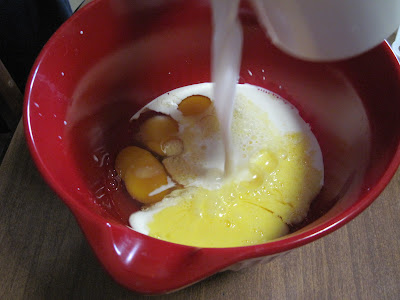 and prepping the phyllo. 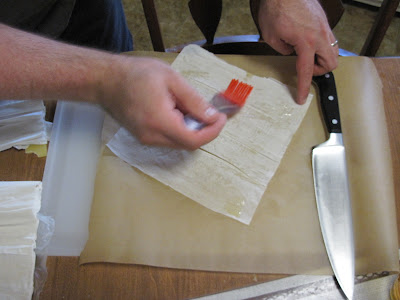 He made little cups of the dough in muffin tins, 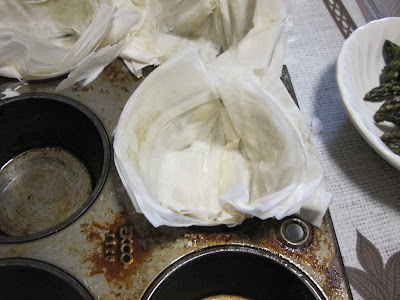 filled them with the veggies and cheese 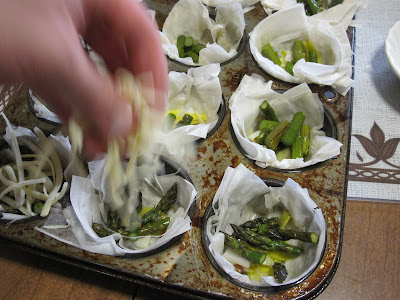 and then the egg mixture. 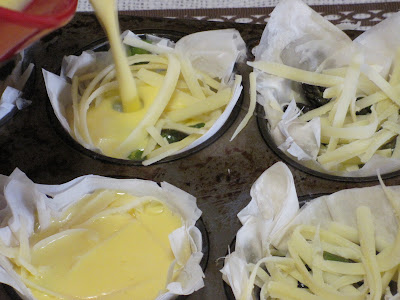 Then he cooked them up. 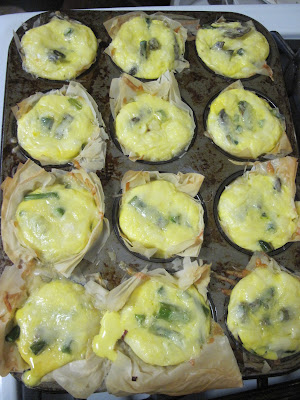 A little spillage, but that's no big deal. There was a minor issue getting them out of the tin (and into, but that's phyllo for you), but nothing a little perseverance couldn't fix. Again, no big deal. But the bottom line, how did they taste? They were fantastic, you couldn't tell they weren't full fat. Plus they reheat well, which makes them perfect for a quick breakfast or snack.

And because I think so highly of you all I'll even ask my brother for the recipe that I forgot to write down while I was there. Heh.
Email ThisBlogThis!Share to TwitterShare to FacebookShare to Pinterest
Posted by Bob Labels: asparagus, breakfast, cheese, eggs, snack, vegetarian at 4/26/2010 09:53:00 AM

I love it! What a wonderful thing for you and your brother to do. You are very fortunate. Great photos too.

Leeks are one of my all-time favorite things. Can't go wrong in putting them alongside some asparagus! Good pics!

You and your brother are quite the baking duo! I am impressed. I love the leek/asparagus combo. It screams spring.

Bob, this is working for me! I just bought fresh eggs yesterday from my neighbor who has chickens. looks fabulous.. love the cat. total domination! keri

I love that he used phyllo. Great way to keep the calories down!

What a gorgeous presentation!! I'm vegetarian, so I'm definitely bookmarking this recipe. Perhaps I'll impress some friends with this for a Sunday brunch..

Mini is good. mini is always good. It's a good excuse to eat more than one. :)

You and your bro make a good cooking team!

I love the color of your quicehe! All the healthy and delicious vegetables are making me hungry! :)

Love this veggie quiche! Mini is even better...the colour the filling looks so inviting.

This is a really great idea for a brunch. You can make personalized portions, and I am such a huge fan of grueyere cheese.

I love these in mini version! I think I will make these for my Mother's Day party. Delicious and perfect. Thanks for the inspiration.

I've never thought to create a quiche in a muffin pan. This is a great idea! The quiche looks delicious!

These look great. I love quiches, and little ones especially. How fun to have a little sibling time in the kitchen...

For any who are interested, the leeks were quartered, then nearly completely separated and roasted at 350 for about 20 minutes. The asparagus went at 400 (but I think 425 would have done better) for a bit less than 20 minutes. Chop them both up fairly small. The egg mix is:
3 eggs
3/4 c egg substitute
1/4 c half and half
1 c milk
salt
pepper

The whole thing baked at 350 for about 25 minutes.

I don't know that I can recommend phyllo in muffin tins like this. They were nearly impossible to get out. I understand you can use the frozen shells right on a baking sheet. I will definitely go that way next time.

Oh, the veggies were coated with olive oil and fairly heavily salted too. The leftovers made an excellent egg topping :)

Your brother's mini-quiches are really beautiful. They are elegant too. I love the idea of roasting the leeks-this really brings out the mild onion flavor.
Great blog post!

This is a great idea using muffin pan for quiche. Looks so yummy

I like these mini quiches in the phyllo - sounds excellent!

Phyllo dough! Amazing idea! I love everything in these. Great job on the photo shoot. :)

ooo i like the phyllo dough instead of the usually tart crust. must add some great texture! yumm!!

i like to see family teamwork. 'tis a rare occurrence in my family--it's better that we not all get together and try to get along when there are knives within reach... :)
great idea for a handy yet still elegant breakfast!

I am so going to try aking mini quiches using my muffin tins. They look fantastic!

I like that these are somewhat lightish. Phyllo is one of my favourites. I`m not a huge fan of crust... shocker!

You can't remember everything, Bob! Your photos are wonderful. I'll wager the asparagus and leek combo is fantastic. Have a great day. Blessings...Mary

Wonderful portable food and vegetarian too. Liking it!

So cute, clever, and tasty!

How fun to be able to just click away while he did all the work! Great pictures, I'm sure you had a great time and the quiches look fantastic. I've been meaning to give those a try

Those look amazing! They're gorgeous. I love the leek and asparagus combination. I'd have to try this when my husband is out of time. He won't come near anything that looks, tastes, or sounds like leeks. :(

What yummy quiche! I love everything in them - and the phyllo cups too. And because their mini I can eat more of them!

And you got to play with that camera a bit more. Mini muffin tins are so great for tiny quiche. Bite-sized is always fun.

Lovely seasonal quiche you have got :)

OMG, these look super delish! The pastry skin tastes even better when you're using the phyllo sheets. Good job, Bob! Have a nice day!
Cheers, Kristy

Dude! You are totally killin me here, without a recipe... LOL Those look Fantastic!

I am definitely going to make this. I made an asparagus, leek tart recently but with a normal pie crust. This seems a great alternative.

This looks terrific! I'm planning on making an asparagus leek tart this weekend, very much in the same vein of flavor.