Just a quickie here, something that I made with some leftovers. 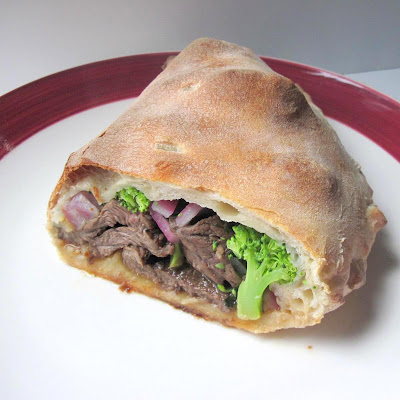 The beef is actually one of those pre-marinated packs from Trader Joe's and I have to admit I was not impressed. Not impressed at all.

It claimed to be "Korean short ribs" and while the marinade might have been Korean, the meat wasn't ribs, it was chuck steak. Now I like chuck steak, don't get me wrong, but when I buy something that says it's one thing and it turns out to be another I'm not best pleased.

Course, I wouldn't have cared if it had tasted good... 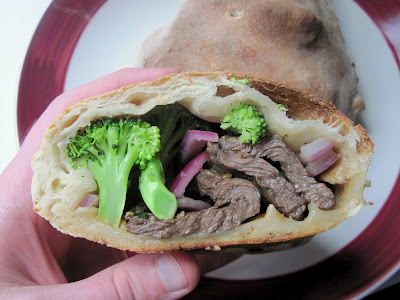 Now, it wasn't awful, but it wasn't something I'd buy again. Or recommend to others. I wasn't going to just throw it out though, it wasn't that bad, so I did my old standby. I wrapped it in pizza dough. 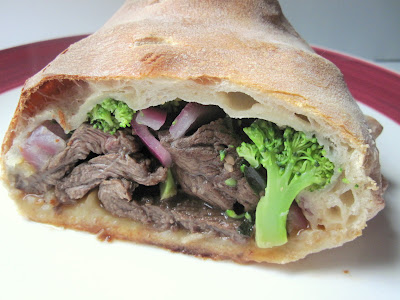 The marinade it was in reminded me of the beef and broccoli from a Chinese restaurant I used to go to so I figured I would toss some broccoli and onion in there and call it a meal. It filled my stomach even if it didn't thrill my palate, so at least it wasn't a total waste.

Despite the lackluster protein, I liked the concept of Asian goodie filled pizza dough. It reminded me of steamed buns, but crispy on the outside and with more flavor in the bread. This is something I'm going to do more with, but next time I'm making my own marinade.
Email ThisBlogThis!Share to TwitterShare to FacebookShare to Pinterest
Posted by Bob Labels: asian-esque, beef, bread, broccoli, italian-esque at 3/16/2010 11:23:00 AM

Which proves that anything wrapped in pizza dough can't be all that bad ;)

I like how you salvaged this. i feel like anything can taste good when its stuffed in dough.

I knew it! You again used the pizza dough! :-) That looks like a pocket of gems. Yum!

Too bad it was disappointing. What's up with calling it ribs when it's not? It certainly looks delicious, I could go for something like that right now...lunchtime!

Good job on making something new with that beef. I try to do those things too but never thought about pizza crust. I will have to try that next time. What crust recipe do you use?

Wow - this is a creative and tasty looking recipe.

Beef short ribs are very trendy in Boston right now. They can be served bone in or out and the cut does encompass some of the chuck area. :)

italianmamachef: I'm partial to this one.

kaje: maybe so, but it was called chuck steak in the ingredient list. ;)

Delicious pocket, I am sure your next version will be even better!

Well it looks good but weird it wasn't ribs! Love that bun.

I'll definitely have one of those. That is a handsome sandwich, Bob. I'm sorry that the meat was disappointing. I do thank you for letting us know and saving us from a mistake. It will be better next time, I promise.

I love stromboli! The filling looks so healthy and delicious.

Can you believe Colorado is Trader Joe-less! Makes me flat out grumpy. Nice save on this beef. Dough makes the world go round.

How creative. Looks good in the pizza dough wrap.

Asian meets Italian! Love it. I sooo wish I had a trader Joes near me!

did you ever try the multi grain pizza dough at whole foods? you will never use any other, I swear. countless number of my friends have made the switch.
you're the calzone-stromboli king!

The nerve... glad you salvaged

Sorry you were disappointed! Good save! That looks yummy!

Pizza dough can make a world of difference. Sorry, it did not thrill the palate...I still think with the right cut of meat, that would have made a great stuffing for pizza dough.

again you turn boring leftovers into something yummy and interesting :)

The filling looks good. I also like to use this in bita bread.

Judging from the picture, it looks yummy! Goes to show you are a very good photographer:D Love that pizza crust wrap.

that looks yummy! especially with the broccoli... it looks so fresh and green and healthy! i like trader joe's and all... but sometimes, things are a "miss" for me too.

Love it! such a great idea. What could be wrong with pizza dough. YUmmo!

It looks fabulous, even if it wasn't as yummy as you'd hoped. I love the idea of the flavors suggested wrapped up in pizza dough!

It's sad that the TJ's ribs weren't all that great... But happiness returns cause of what you did with it. YUM!

Talk about making a purse out of a sow's ear... or rather a Stromboli out of a Beef rib.

what picturesque innards! too bad the meat wasn't superior because this has everything else going for it--excellent creation!

Bob, this is a great idea. You'll perfect it, I know. Sorry about the ribs. I hate it when that happens...

well, even if it started out less than perfect boy is your dough stuffed treat a lovely thing to look at!

Great save! Love beef short ribs and you made a very unique dish! Yum!

A terrific idea to make a beef and broccoli stromboli, super delicious!

Nice save! I have to do that with my pizza dough next time.

I just came across your blog and I am so glad I did! This looks fabulous!

Oh man...that really surprises me. I mean most everything I've ever bought at Trader Joes, I really liked (unless I bought something weird and discovered that I still don't like olive paste). But...you did good with your improvision :)

Yeah, I saw those at Trader Joe's and was a bit dubious. I do like their Pollo Asada. Nice attempt to rescue it!

Aww, I'm sorry the TJ beef was disappointing - that's always the worst. Your idea to use it in a stromboli is genius though!