When I did my Sausage Cart Spaghetti post last week I was dismayed by how many people had never had an Italian sausage from a vendor's cart. 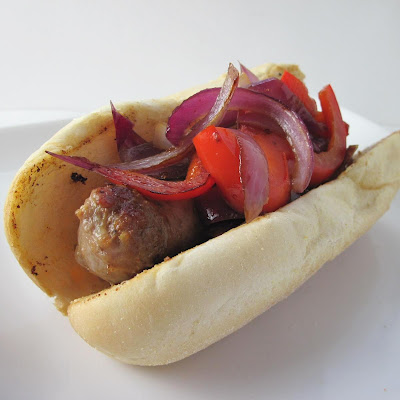 I mean sure, they're greasy, sketchy and who knows when that license they have taped up (but covered in grime) was last renewed, but c'mon! Slightly charred sausage, soft and gently caramelized peppers and onions, it's deliciousness on the go, how can you even resist?

Or maybe it's that they don't have them around you, is that why you haven't had one? I'm told they are mostly a Northeast city thing, so if you don't live up here they might not be around. You might not know the dubious joy of waiting in "line", if the unruly mob around any given vendor can be called that, with impatient suits and bike messengers trying to grab a quick lunch (or breakfast), inhaling second hand smoke, first hand insults and thinking it will all be worth it once you get your sausage and all these fricking people just fricking stop fricking bumping into you. Or maybe that's just me... Anyway, here, let me show you how to recreate it at home.

All you need is around five ingredients; Italian sausage, peppers, onions, mustard (if you like) and rolls, and you're all set. First I should tell you though, different vendors make sausages different ways, there isn't one magic vendor method that makes some kind of delicious thing. But fortunately all the methods that I've come across are wicked easy, have a minimum of ingredients and can be done quickly. Almost as though the people who use them are in a rush and feeding people for money. Heh. Anyway, this is how I do it.

First, you've got to brown up your sausages. 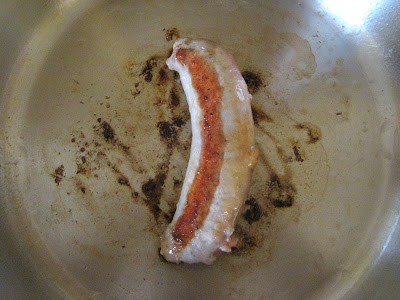 Or in this case, sausage. You should set the heat to medium-high, I like to use a steel skillet, although cast iron is good too. Don't be shy when you're cooking them, a good bit of browning means a good bit of flavor. Plus you want some fond because it will add more flavor to the veggies. Don't stress cooking it all the way through, it's going to get steamed some in just a minute, color is the main goal here.

Next add some sliced peppers and onions, sliced kind of medium thickness. 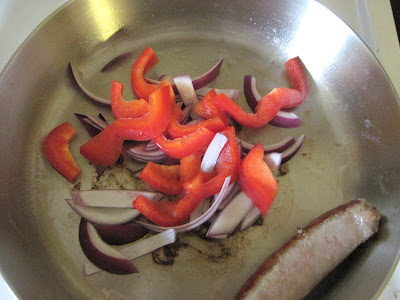 I like red for both, but you can use any kind you like. Toss them around to coat them with some of the fat then pile them up on any fond you have. Now cover the skillet and let it steam for about five minutes or so, longer if you want the veggies softer or if the sausage isn't cooked through. It's not rocket science, kids. 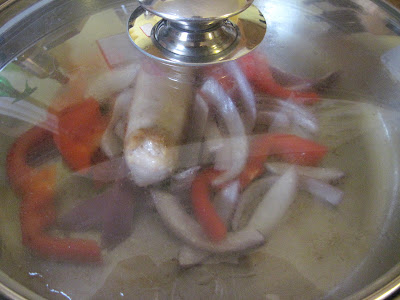 The veggies will let out some liquid which will deglaze the pan a bit, so when everything is cooked just toss them around some more to coat them with all that goodness. 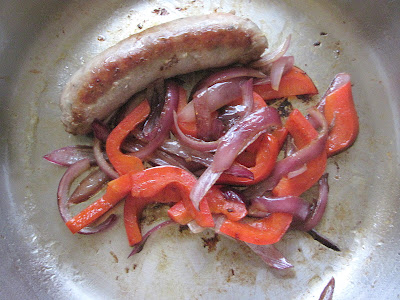 And that's it, other than toasting the roll 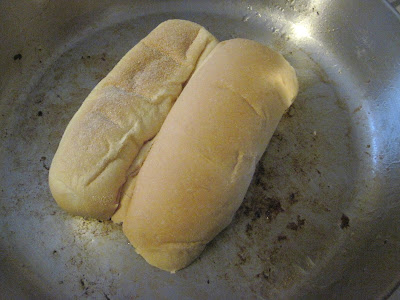 and slapping on a little mustard. 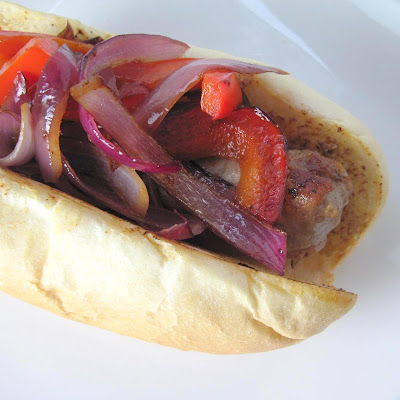 This is possibly the simplest way to make Italian sausage, short of just grilling them, and it's definitely my favorite. 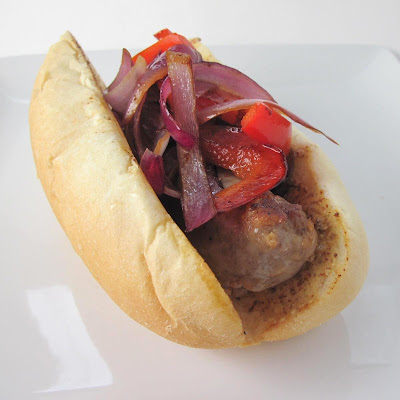 One great thing about this method is you can make just one or as many as your skillet will hold, it doesn't really change the length of time you need that much.

But that's it, that's how to make an Italian sausage like a vendor. For a more authentic experience I suggest making them for a crowd, that way everyone can stand around the stove, pushing and talking on cell phones, complaining that they have to get back to work and what's taking you so long anyway? How hard is it to fry a sausage?! This package won't deliver itself, douche bag! I've got a meeting in ten minutes!
Email ThisBlogThis!Share to TwitterShare to FacebookShare to Pinterest
Posted by Bob Labels: sandwich, sausage at 3/31/2010 08:44:00 AM

What is Italian sausage? There are PLENTY of different kinds of sausages in Germany, but I am not quite sure I have seen "Italian Sausage"? What is it made of? Pork or beef or a mix?

Angie: In the US Italian sausage is a fresh, uncooked, uncured pork sausage that is dominantly flavored with fennel seed. I'm not sure what it's called in Europe (or even if the same thing is made there), I'm afraid.

Bob, I've never encountered a sausage cart, but every fall, at the state fair, there would be stalls set up with dudes cooking sausages, onions, and peppers on giant griddles. The aroma alone was enough to make you weep with joy.

mustard? must be a regional thing I havent seen mustard offered around these parts maybe I am missing out on something - looks good though, nice step by step!

You should consider starting up your own sausage cart with this on the menu. Look fabulous and I know my hubby would love it.

Looks great! I've never had a sausage from a cart, so maybe I'll try this home version.

I agree with Bridgett, if you are gonna be makin sausages like that! YUM

Bob, this looks wonderful. You could go into business with this one. What type of camera do you use?

Gourmet hotdog, it's making me hungry!

This looks tasty and hearty - wish I had it for lunch today.

Ha! This made me laugh. I like the idea of recreating an abusive sausage cart experience at home for friends. Any post that uses the phrase "douche bag" goes to the top of my list. Nicely done, Bob.

Yum - have to make them soon. I agree with you, the only way to apply mustard is to "slap" :-)

Great post. I'd make them tonight or dinner if I hadn't had such a big lunch. I need to behave tonight.

Ha ha! I loved the description of all of the jostling in line. I have never experienced that (the hot dog cart, not the jostling)

that all looks so delish! but i have to say, that it was the toasted bun that really got to me. gotta love those carbs!

Maybe THAT is what I'll have for lunch tomorrow...hmmm

Oh yes, you must cook the bread in/on the same surface as the meat and peppers. You must. Otherwise, you lose so much good flavor!

Oh, now I'm hungry again! I don't think I'd like cooking with an angry mob around me, don't need the pressure..ha!

looks really really good. I like to brown meat b4 cooking too, it adds a lot of flavour.

I would like to pack that for lunch, please? Thank you. :D

I love a good sausage and pepper sandwich! And this definitely fits the bill. We usually don't use any condiment on them - just the grease!

Looks awesome! We have a ton of food carts here. I used to go to a burrito cart all the time when I lived downtown. The burritos were out of this world good!

I always get food from carts in NYC! I need to make these for my hubby :)

For that 'authentic' experience, I'll tolerate some abuse if my guests also give me money for the Italian sausages! Otherwise, I'll keep them all to myself. 8-)

This looks delicious Claudia...I'm saving this recipe for when I can have my carbs again! and This has to be the most amazing thing since HOT DOG.

I made this last night, delicious!. Here in Ohio, almost all the vendors use marinara sauce or pizza sauce instead of mustard.