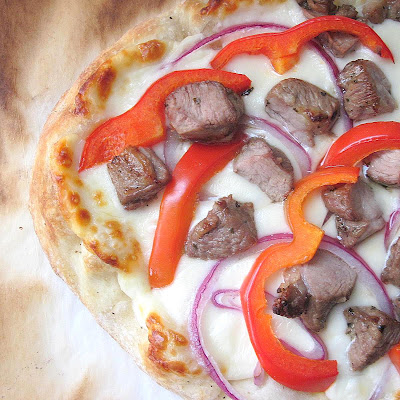 There is a story behind this slightly odd bite of pizza. See, as I've mentioned before, my brother makes some kick ass souvlaki. But, he doesn't have anything as convenient as a recipe. So when I called him the other day looking for one the conversation went something like this:

Me: "Hey, I want to make souvlaki, what's your recipe?"

Him: "Oh, I don't know. Something like equal parts lemon juice and olive oil, some oregano, garlic, soy sauce... you know, souvlaki."

Me: "Fine. Of course you know this won't spoil my plans."

Him: "Ah, but I have the last piece of the device! Your scheme won't come to fruition without it!"

Me: "But I have the artifact from R'lyeh!"

Ok, that never happened. Well, part of it did. I'll leave it to you to figure out which.

So, the lack of a recipe meant I needed to experiment (cue lightning and maniacal laughter). Which I did (cue lightning again). And I came up with something pretty good based on my brothers vague instructions. It does however need some tweaking, so I'm not posting it just yet.

As you see though, I did make a pizza with the leftovers. 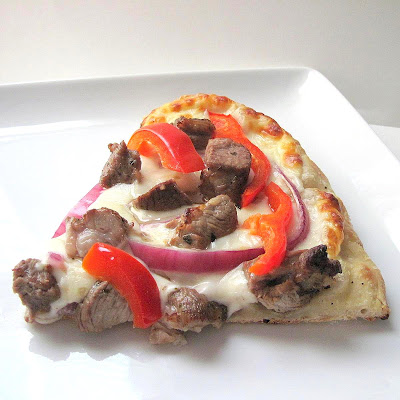 It's another white one, since I love white pizza. The original plan had been to make a tiny batch of the marinade to spread under the cheese, but I got lazy. So I just used some olive oil, garlic and oregano. I added some peppers and onions, since they go so well with souvlaki. All in all a great use of leftovers. 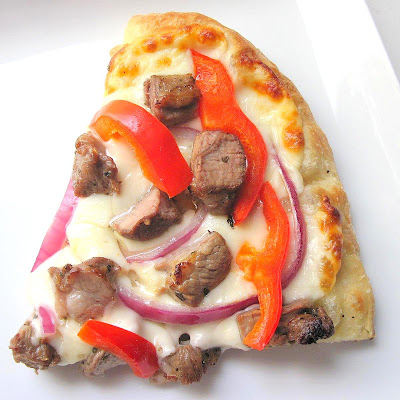 Next time what I'm going to do is essentially the same thing, but squirt some lemon juice on it after it comes out of the oven. I think that would lend a really nice, fresh flavor to it. I'm also going to use at least some kasseri (that's a Greek/Turkish sheep cheese, melts well) instead of mozzarella, probably half and half. 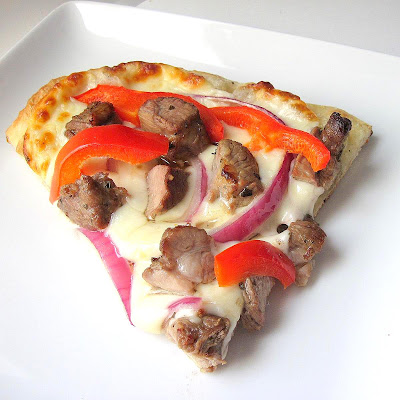 And that would be awesome, I think. Also, instead of using leftover lamb I'm going to marinate it, chop it up small and put it on top raw before the pizza goes into the oven. That way the lamb will be closer to the proper level of done. But even slightly well done like it was this time was wicked good.
Email ThisBlogThis!Share to TwitterShare to FacebookShare to Pinterest
Posted by Bob Labels: bread, greekesque, lamb, leftovers, pizza at 3/10/2010 09:18:00 AM

This is an awesome idea!!

Yeah, I think lemon juice after it comes out of the oven is a great idea!

This is an incredible pizza with perfect flavors. Your rock with your recipes. Amazing!

Now this is some fancy pizza!!!

This is a combination that I haven't yet tried. It really looks wonderful.
You have such great recipes.

This looks really good. I have no doubt that your souvlaki is as good as your brother's.

Haha...you had me going there with your conversation with your brother.

Nice job with trying to make it on the fly. It looks fantastic!!

Love the looks of that pizza! I bet your invented souvlaki is better than your brother's!

What a fantstic and creative pizza combination.

My brothers would absolutely love this. Real man food!

What a beautiful pizza. My husband would really love it.

Oh wow that looks good. I'm thinking the secret device part of the conversation was the part that didn't happen, but the brother/sister name calling probably did happen. Ha!

This is a very clever combo of ingredients and ethnicities! I bet it was really delicious!!!

Mmmmm pizza! This looks like a fantastic version. Siblings - a pain in the arse ;)

I cannot wait until you are comfortable with your tweakings to actually post the recipe... I love souvlaki and it one of the things I have never tried to make... Kudos on the pizza... Totally awesome!

You make the most creative and delicious pizzas! I like the idea of it but I would have to go with chicken.

I love using leftovers as pizza toppings. I don't think there's a food that doesn't taste good on top of a crust with some cheese.

You are so funny lol! I can imagine myself chewing on those chunks of lamb:D and the doneness looks like what I would love. I do not like too rare meat, the redness gives me the creep somehow.

Now that is a gourmet pizza!

You are definitely thinking like a chef, my dear - love the souvlaki pizza ideas!

Souvlaki sounds excellent. I can't wait for you to post the recipe. White pizza has always been my favorite as well. The more cheese, the merrier.

Nice job on this! I like your thoughts for the next time. I'd love to try that kasseri cheese!

I agree, adding lemon juice after is better!very fancy!

I actually was thinking of making lamb soon so I'm looking forward to any ideas you will have coming up!

Awesome idea! And I'm with you on the white pizza for sure!

Bob,
Thank you, as always, for visiting. My neighbor is a game warden and always gets to go deer hunting the day before the season starts. Fortunately he is s good hunter and fortunately his wife is a fellow foodie who likes to share the bounty. :)

this looks to die for!

I've been totally incommunicado...I really want to weigh in on the bacon grease post...

Looks incredible! I like pizza as I can put anything everything I like on the dough and bake!

What a unique pizza - it looks amazing and completely addicting too!

That does look like a wicked good lamb pizza!


I just wanted to drop you a line and tell you how much I enjoy your site. Your pictures look great enough to eat!


I wanted to make you aware of a new free resource for the food blogger, DamnFineEating.com. DamnFineEating.com is a food photo blog open to everyone, you can upload and share your photos on the site and link them to your food blog. It's just another free tool out there to help you drive more traffic to your site.

I invite you to become a member today at http://www.damnfineeating.com/register.php. Once a member, you can also add the DFE badge to your blog to encourage your readers to follow your food pictures, information on how to do this can be found on our site.

Thanks and keep on blogging!