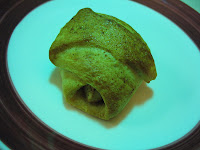 Preheat oven per package instructions. Mix together the apple, cinnamon, nutmeg and sugar. Let macerate for 20 minutes. Unroll the crescent rolls and put about 1-2 tbls of apple mixture on the wide end. Fold the two short corners over the apple, then fold the long end over that and back over itself. Brush the tops with the liquid from the maceration. Repeat with all the rolls. Place on a parchment paper lined baking sheet and bake till golden brown. Serve hot.

Here's a quickie for you folks. My girlfriend bought a tube of crescent rolls a while ago and I wanted to do something a bit different with them. Since we still had some apples leftover from her apple picking expedition, I whipped these up. They came out pretty good, but next time I want more filling. I was afraid of overloading them, but I don't think I needed concern myself. So when I make these again I will probably double the amount you see here.

So, first I chopped, cored and peeled an apple. I used one and had some leftovers (which I ate with a spoon. Mmmm.), but like I said I didn't fill them too full. I chopped the apple pretty small, since the rolls aren't too big. You could probably even do this by wrapping the dough around one big slice of apple, I'll have to try that next time. I tossed in some cinnamon, nutmeg and brown sugar. 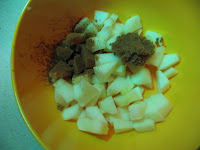 Mixed it up and let it macerate for a while. 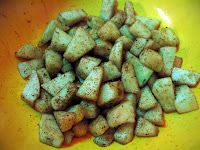 Then I unrolled a roll, 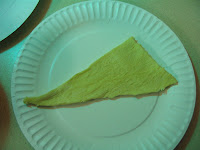 dolloped some apple in it 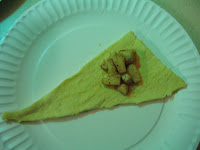 and folded one corner, 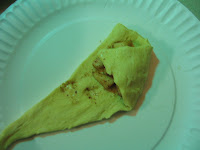 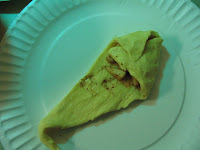 and finally the long end over that and back on itself. 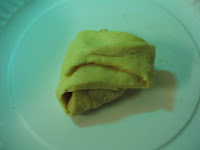 It makes a nice little package. I put them on a parchment lined baking sheet and brushed them with the liquid leftover from the maceration. 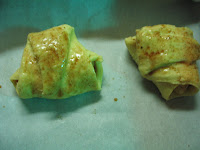 They could have used more of this too. Maybe brush some on the long section before folding it back... hm. I'll have to do more experiments and do another post. Heh, how tragic. Anyway, I then cooked them according to the package instructions. Pulled them out when they were golden brown and ate them. 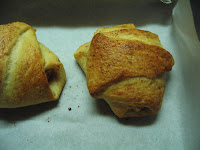 They were quite good, the only complaint was we wanted more apple. I think a little cream cheese might have been good too, maybe some kind of berry. Anyway, there you go. Little pie-lette things.
Email ThisBlogThis!Share to TwitterShare to FacebookShare to Pinterest
Posted by Bob Labels: baked goods, breakfast, dessert, experiment, fruit, snack at 11/23/2008 02:15:00 PM

Your little pie-lettes look delicious! How about a drizzle of confecioners' glaze? Or a cream cheese glaze, yum! I agree, cream cheese would go nicely. I have a whole peck of apples calling to me, thanks for the inspiration!

Thanks Reeni! Cream cheese glaze sounds delightful, how do you make it? I'm in the same boat with the apples, I'd be curious to know what you make with them.

What a easy, fast and simple experiment. And I bet tasty too!

Thanks Clumbsy! They were tasty. They have room for improvement, but thats half the fun. :)

Juliet: I saw a bunch of other bloggers using crescent rolls for things, that's how I thought of it. :D