Barbecue Pulled Pork From the Oven 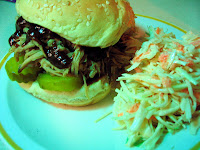 Mix the spices well. Score skin to allow fat out. Coat pork with the rub. Cover and roast at 300º for 5-6 hours, until meat shreds easily with a fork. Pull the pork out and allow it to cool enough to handle.

Pour 1/2 cup of water into the roasting pan, bring to a boil and deglaze pan. Pour the liquids off into a heat proof bowl and cool. With two forks (or hands), pull the pork into shreds, discarding excess fat and skin. Skim fat from the liquids and discard. Pour the liquids into a large pot, and bring to a boil. Add the cider vinegar. Stir in the shredded pork, return to a boil, then lower the heat and simmer for ten minutes. Serve hot on a bun. I recommend pickles and coleslaw.

Ok, first off, I know the definition of barbecue is a touchy subject for some people. I have no interest in getting involved in an argument about whether this is "real" barbecue or not. Don't want to call it that? Dandy. Call it whatever you want. But it is delicious no matter what it's called. So. This recipe is adapted from one that my sister in law got from the Boston Globe. That recipe is spectacular, but I didn't have all of or enough of the spices to make that particular rub. So I improvised. This is what I came up with. It turned out really, really good. The original had no garlic, which kind of bugged me, so I added some. It also didn't have mustard powder, which I have always used in pulled stuff. So that got added too. I didn't have as much cumin or paprika as the original called for, so this one is a little sweeter. But that worked out well since both me and my girlfriend like sweet in our barbecue. And it still wasn't sweet, just not wicked spicy. This also isn't something you can make for just a couple people, at least not without tons of leftovers. I'm freezing some of it, I will update the post with how that works out. (UPDATE: it freezes fine. I reheated it by putting a little ,2-3 tbls, water in a pan, tossing in the frozen chunk of pulled pork and letting it simmer for a couple minutes) But, anyway, barbecue pulled pork. It's a good time. Here is how I do it. 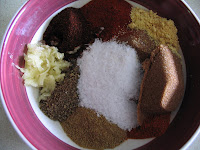 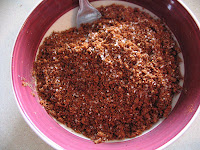 I do wish I had had some smoked paprika or at least liquid smoke for a nice smokey flavor, but I didn't. So you work with what you have. Now take your huge chunk of pig. 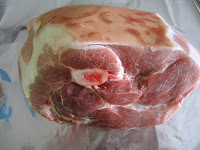 Seriously. Huge. Five and a half pounds of pork. If it was any bigger I would have had to name it. But it wasn't, so I didn't. I did however need to score the skin. 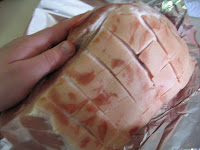 You want to do it deeply, but not so deep that you cut the meat under the fat. If you cut the meat a little it's no big deal, but try not to do it too much. You will want a really sharp knife for this. I learned that several of my knives need sharpening during this stage of the prep. Once the skin is scored, rub the rub in. 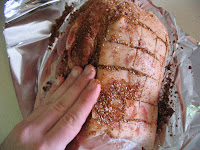 You probably won't use all of it, but more is better than not enough. Now you want to put the shoulder on a rack in a roasting pan. 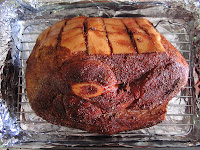 I lined the pan with foil because my pan has some baked in nastiness that I'm not going to show you and I certainly don't want coming off in my sauce. It worked out just fine. You want it on the rack so it doesn't braise, that's not the goal for this recipe. Now, the original recipe calls for browning the meat, but I didn't and it browned plenty after being in the oven for five hours, even covered. And that's the next step, cover it with foil and put it in the oven for five to six hours. Mine was in for five and when I pulled it out it was already falling apart. 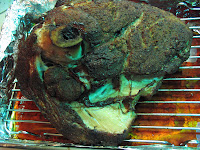 Which is the goal. When I pulled it off the rack it came up in pieces. 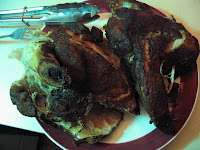 That's a good sign as far as I'm concerned. Now you want to let the meat sit till it's cooled enough to handle. I've found the best way to pull it is by hand, forks only complicate things and make it harder to get most of the fat off. While the meat is cooling it's time to deal with the sauce. You want to separate the fat from the juices. I do this with a big gravy separator that I have. 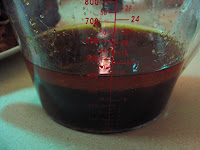 Works good. I added a half cup of water to it to make it easier to separate and to let me boil it for a while without making the sauce too strong. Now you want to pour the liquid into a pot and bring it to a boil. Some of you might be thinking, but what about all that fat? Well, you should really just let it go. It's for the best, trust me. Plus if you do you can add a tablespoon or so of bacon grease. That adds some smokey flavor and... well, bacon. Bacon makes everything better. At least that's what I did. You don't have to if you don't want to. You also should add a tablespoon or two of cider vinegar to the sauce, that gives it a nice zing. 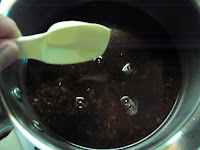 When the meat is cooled enough to handle, shred it. 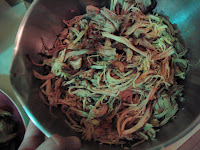 How do you know when the sauce is ready? Well the best way is to take a chunk of meat and dip it in there. 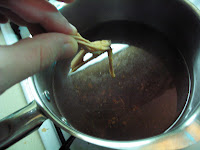 Eat it. Is it delicious? Then it's ready. Now the best way to do this next step is to add the meat to the boiling sauce and then let it simmer for a couple minutes, but the pan I used wasn't big enough. So I added the sauce to the meat. 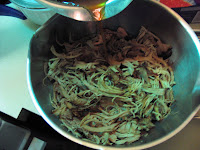 Worked out fine. You also might not use all the sauce, it's really a to taste thing. But however you do it, when it's done you should serve it hot on a toasted roll. I suggest with pickles, 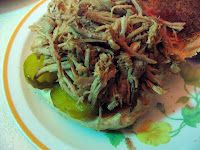 the barbecue sauce of your choice 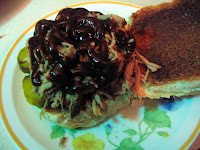 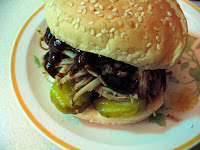 I am going to have to make this. Now.

You do that Deb, you do that. Heh, let me know how it comes out!

YUM! What a great sandwich!

Mmm...that reminds me of the barbecue my friend from NC makes. I've got to get off my butt and make my own :)

That looks and sounds like heaven! I have not had good BBQ since July!

Vicki and Bakingblonde: Thanks ladies! I can't recommend this recipe enough. It's great for the winter too, it makes the kitchen (or in my case the whole apartment) nice and warm and it smells awesome all day.

We went to school in North Carolina, so if there's any good pulled pork, it's there. Yours looks like a fabulous contender!!!!

Thanks Duo! I wish I had a smoker, but this is about as good as it gets from an oven. Hmm, I still have some in the freezer, I might bust it out for lunch now that you've made me think of it. Heh.

I just pulled this recipe out of the oven (we are literally eating it as I type!) and I have to say it is delicious! We weren't planning on having it for lunch but the smell from the kitchen was so good we couldn't wait!

The only thing I want to note (for those like myself that don't do a lot of oven roasting) is that the cooking time should be about 30-40 minutes per lbs, or until the thickest part of the meat reaches 160-170 degrees. The cut I bought was smaller (about 4 lbs) and barely had any fat on it, so I was a little worried about it drying out.

We're going to throw this into some tamales tomorrow, it's definitely going into my recipe box!!

I'm wicked psyched that you liked it erin! Thanks for the info, I'm working on an update post where I will share some updated stuff about some recipes, I will definitely put that in there.

What will happen if accidentally score the bottom of the shoulder as well as the skin. Will it dry out?

@anonymous: Nope, it will be fine. Honestly I said not to cut too deep because that's what I've read, I don't know if anything bad actually happens...