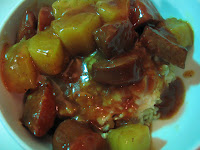 Cut the kielbasa into bite sized chunks and brown it and the onion in a frying pan. Remove the kielbasa and onion and deglaze the pan with the pineapple juice. Add the ginger, cayenne and vinegar. Reduce the heat to medium-low and let the sauce reduce for a minute or two. Taste and season with salt and pepper to taste (it shouldn't take much). Bring it to a low boil and slowly pour in the cornstarch/water mixture, stirring the whole time. Once it's fully incorporated and the sauce is thick add the pineapple and kielbasa. Stir to coat and let simmer for a minute or two to heat the pineapple and let the flavors mingle. Serve over rice.

So I needed something to do with kielbasa. I thought sweet and sour might be good, since sweet is often paired with it. The experiment turned out to be a mixed bag. I liked it well enough, but my girlfriend wasn't crazy about it. She might not like sweet and sour at all though, she isn't sure since she hasn't eaten it much. I think it would have been better if I had some peppers, chow mein noodles, cashews, or some water chestnuts or something. But, it's done and there's no taking it back. I like the way the sauce came out, it was a fairly basic sweet and sour. Next time I want to try it with pork or chicken, see if she likes that better. So, here is what I did.

First, I browned the kielbasa. 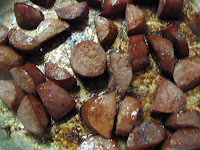 Did I get a decent picture of that? No. Too much steam and arm movement. I have a tripod, but it's really small. I misunderstood the measurements or something. I'm still pretty new to this photography thing. But there it is. One problem, right off the bat, is I didn't have fresh onion, only dried/minced. It worked out fine, I just added it toward the end. But I am getting ahead of myself. Once the kielbasa was browned I removed it and deglazed the pan with the pineapple juice. 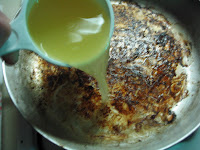 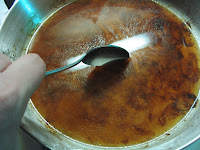 Then I added the vinegar, 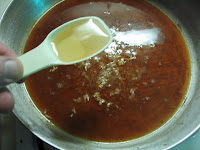 sugar, onion and spices. I let it reduce for a minute then thickened it with a corn starch and water mixture. 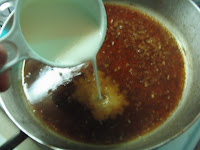 It came out nice and thick, which makes it cling to stuff. That part was good. Then I just tossed in the pineapple and kielbasa, 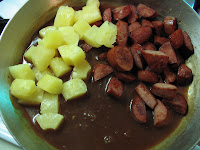 mixed it around and let it simmer a little more. 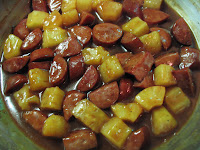 And then that's it. 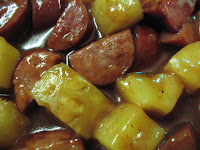 I served it over rice. Like I said, I liked it well enough. It wasn't great, but it wasn't bad. I'm not sure that I'd make it again with kielbasa, but I will be making the sauce again with chicken.
Email ThisBlogThis!Share to TwitterShare to FacebookShare to Pinterest
Posted by Bob Labels: asian-esque, experiment, fruit, rice, sausage at 11/07/2008 02:33:00 PM

I think that sounds like it'd good. I like sweet and sour and I like kielbasa. The thing I like best is that you're experimenting! So many folks are afraid to try something new in the kitchen. Good on you!

Thanks Jo! I've been trying to experiment more. I found myself cooking the same things over and over and figured it was time to mix it up. That's one of the reasons I started blogging, it's forced me to do new things. Otherwise I would be out of recipes by now. Heh.

Glad you like the sound of it Spryte. I'll send you my girlfriends leftovers. ;)