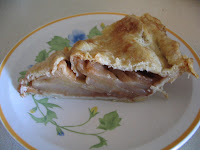 To prepare crust, lightly spoon 2 cups flour into dry measuring cups; level with a knife. Combine with 1/2 teaspoon salt in a bowl; cut in butter and shortening with a pastry blender or 2 knives until mixture resembles coarse meal. Add vinegar and enough ice water, 1 tablespoon at a time, tossing with a fork until dough is moist. Divide dough in half. Gently press each dough half into a 4-inch circle on heavy-duty plastic wrap, and cover with additional plastic wrap. Roll one half of dough, still covered, into a 12-inch circle; chill. Roll other half of dough, still covered, into an 11-inch circle; chill.

Remove 1 sheet of plastic wrap from the 12-inch circle; fit dough, plastic-wrap side up, into a 9-inch pie plate coated with cooking spray, allowing dough to extend over edge of plate. Remove top sheet of plastic wrap. Spoon apple mixture into crust. Remove 1 sheet of plastic wrap from the 11-inch circle, and place dough, plastic-wrap side up, on top of apple mixture. Remove top sheet of plastic wrap. Press edges of dough together; fold edges under, and flute. Cut 6 (1-inch) slits into top of pastry using a sharp knife. Brush top and edges of pie with milk; sprinkle with 1 tablespoon granulated sugar. Place pie on a baking sheet; bake at 450° for 15 minutes. Reduce oven temperature to 375° (do not remove pie from oven). Bake an additional 45 minutes or until golden (shield crust with aluminum foil if it gets too brown). Cool on a wire rack.

Does anything say fall more than going apple picking and then making pie? No. Nothing does. Don't try to convince me otherwise, it won't work. So as the name states this recipe comes from my brother. In fact, he made the pie too. He's an odd fellow, he likes making pie more than eating it. I don't understand, but whatever. I got pie, so I'm not going to worry about it. Heh. This recipe is wicked good, the crust is flaky and tender and the filling is sweet and appley. Just like a pie should be. Anyhow, less talk more rock.

First things first, you need to make the crust. You need cubes of sweet, sweet butter. 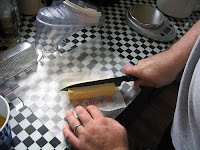 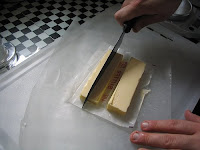 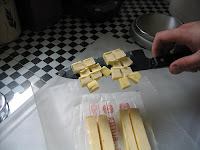 And lumps of significantly less sweet shortening. Using both gives you the great flavor that only butter provides and the flakiness that you get from shortening. My brother gets all fancy pants with it and weighs out the fats and flour. 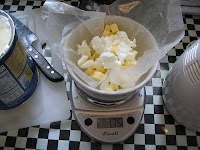 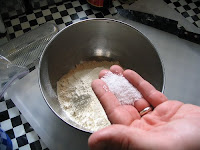 He doesn't even measure the salt though. He also uses a food processor to mix it all into a coarse meal. 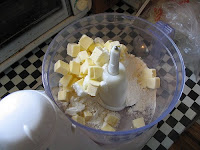 Much easier than a pastry blender. 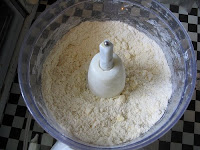 Pour that in a bowl and add your water 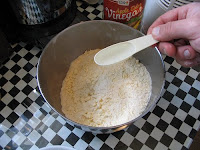 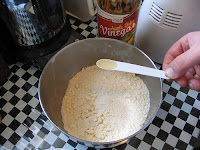 Mix it gently with a fork till it looks like this. 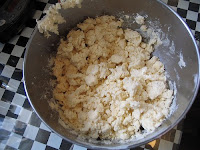 You want it to look loose but if you squeeze it it holds together. 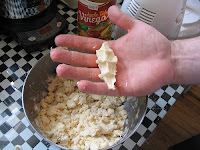 Now pour it onto some wax paper, 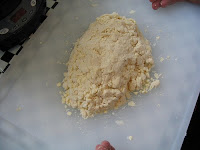 shape it into a disc and let it refrigerate for a couple hours. 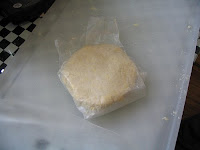 Now, the filling. Apples, of course. 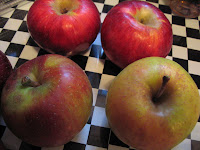 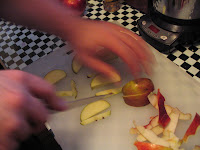 Like the action shot? By the time we got to this stage we had lost our natural light, so the pictures are old-timey looking. But there it is. Once the apples are cut, toss them with the lemon juice, cinnamon, flour and sugar. 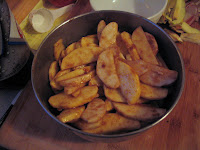 I thought it a little odd that cinnamon was the only spice, but my brother assured me it would be fine. And it was. Now you want to roll out your dough. 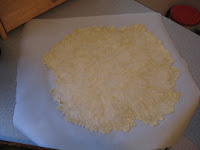 My brother isn't too concerned about neat edges or fancy crimping, which is fine by me. I'm far more concerned with how the food tastes than how it looks. I mean c'mon, I eat stroganoff and that looks like... well we won't get into that. But anyhow roll the dough out into two round sheets, place one in a pie dish and stab it with a fork repeatedly. 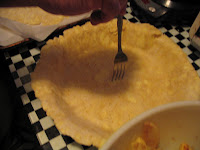 My brother rolls his dough out on parchment paper to make it easier to place on things. It works well. Now pour the filling into the pie 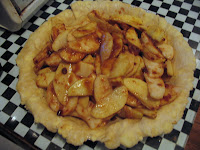 and top it with the other half of the dough. 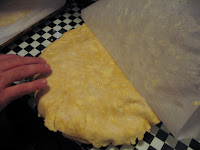 Enjoy the look of big wads off butter. Mmm, butter. Now seal it up. If you want to be fancy, go nuts, but like I said, it wasn't a concern here. 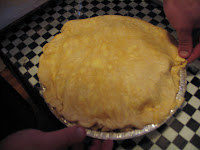 Slice some steam vents in the top, 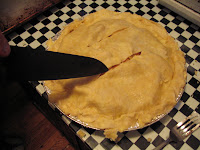 brush it with milk 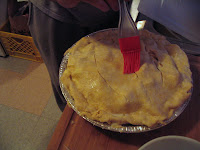 and sprinkle it with sugar. 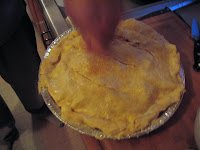 Bake at 450 for 15 minutes, reduce heat to 375 and cook for another 45. Sometimes pies start getting too brown and you need to cover them with foil, but that didn't happen this time. 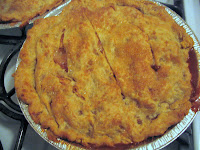 Now let it cool, if you can. Then eat it.
Email ThisBlogThis!Share to TwitterShare to FacebookShare to Pinterest
Posted by Bob Labels: baked goods, breakfast, comfort food, dessert, fruit at 11/15/2008 12:53:00 PM

You know what's funny? I love apples but apple pie doesn't appeal to me that much! I like baking it more than eating it, too. And I prefer a crumb topping over the traditional pie crust. You did a great job on the step by step, love how you used a whole bunch of different types of apples.

I love your step by step pictures! And the pie looks very very good :) Nice job!

Thanks Reeni, yeah crumb toppings are wicked good too. So you are in the same boat as my brother with enjoying making it more than eating it. I don't get it, but hey, whatever makes you happy. :) Heh.

Thanks Jo! I will tell my brother you said so. ;)

That looks so delicious!

That looks so good - hands down, apple pie is my favorite!

Thanks Biz, apple pie is my favorite too.