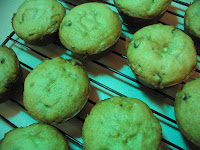 Preheat oven to 350.
Grease a muffin tin.
In large mixing bowl cream shortening or butter, sour cream and sugars until well mixed. Add the eggs and vanilla, beat to combine.
Measure flour, baking soda and salt in small bowl. Slowly add to creamed mixture and beat until combined.
Fold in the chocolate chips.
Fill prepped muffin tins half way.
Bake for 9-12 minutes until bottoms are light to golden brown.
Cool on wire rack and store in covered container at room temperature.

This one comes from Bakingblonde, she had made them and wasn't too impressed. She said they weren't quite sweet enough for her and thought nuts would be better than chocolate chips. She asked her readers for suggestions and I figured I would give them a shot, see what I can do. I did add some toasted pecans, but my girlfriend wouldn't let me cut out the chocolate chips altogether. I wound up using some semi-sweet/white chocolate swirled ones, since that's what I had on hand. I didn't add any more sugar since I didn't know if they would be sweet enough for me, but when I cut the recipe in half I left the vanilla alone figuring that might help it out. Plus I just love vanilla. I also remembered a recipe I had some years ago where you made the cookies in a muffin tin to give them more browned parts, almost like a crust. So I figured I would try that too since she had mentioned they were cakey. The verdict? They are ok, but frankly I wouldn't really call them cookies. Even the second batch that I made on a cookie sheet came out more like a muffin top than a cookie. If I were to make them again I think I would just fill the muffin tin (probably use a mini-muffin tin to help them not overbake) all the way and call them muffins. The nuts were a nice flavor and texture, but I agree with Bakingblonde, they could use a little more sweet. She suggested a frosting, that might help. But anyway, enough rambling. Here is what I did.

First, I cut the recipe in half. That way if they came out awful I wouldn't waste too much and if they came out spectacular I wouldn't eat them all and die. I was out of brown sugar so I just added a tablespoon of molasses to the butter and sour cream and mixed it up a bit before adding the 3/4 cup of granulated sugar. 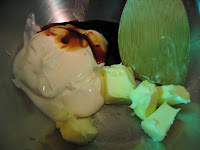 Then I creamed it, but it didn't work well because my sour cream was still cool so the butter congealed a bit. 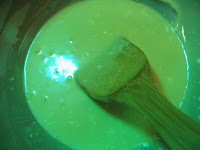 Ah well. Once it was as creamed as I could get it I added the egg and vanilla. 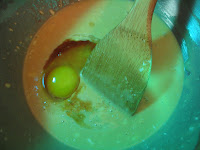 Like I mentioned above, I used a whole teaspoon of vanilla in the half recipe and it was fine. Then I mixed in the flour, soda and salt. 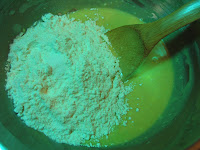 Once that was well mixed 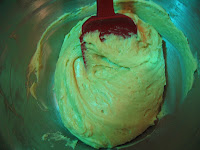 I folded in the nuts and chips. 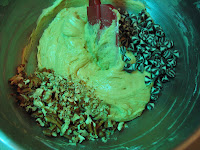 The dough was really more like muffin batter than cookie dough, it was sticky and never would have formed a ball. But I was putting it in a greased muffin tin anyway, so whatever. And that's what I did next. 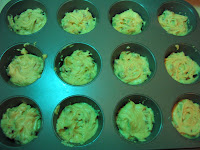 I only filled up the tin halfway or so, but I think would be best in a mini muffin tin, filled to the top. I baked them at 350 for about 10-13 minutes, till they looked done basically. 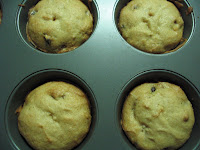 I had a little bit of a time getting them out of the tins, I think flouring them would have helped. They browned pretty well 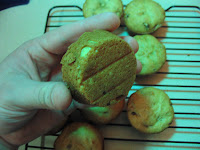 and were nice and moist. 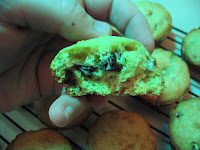 So yeah, they were pretty good but definitely more muffin than cookie in my opinion.
Email ThisBlogThis!Share to TwitterShare to FacebookShare to Pinterest
Posted by Bob Labels: baked goods at 11/08/2008 08:36:00 PM

Thanks for the update Bob! They need some frosting or something, I totally agree about them being bland and cake-like, haha.
Love the pictures and glad to know nuts were better than the chocolate chips like I thought.

Whatever they are - they look good. I don't care what you say. I'd eat em.

The look realy delicious, either way!

Oh don't get me wrong Emiline, I'm eating them. :) It's not that they are bad, they aren't. They just need something... more. I think I might try them again and add some lemon or orange zest. I think that would be good.

Thanks Katie! Heh, you could try making them, I'm sure you could come up with something to spice them up.

Thanks Meg! They certainly weren't bad... they just need a little something more. Heh, it's not like they lasted more than a couple days without being eaten. :)