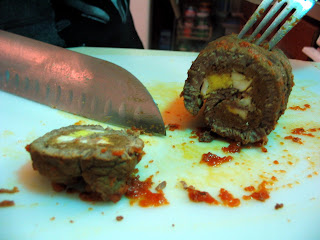 So, last time I made braciole (as opposed to the first time when I didn't spell it right or cook it successfully) I learned a few things that I wanted to implement. And implement them I did. First off, the pre-butchered braciole meat is plenty big for two portions, typically. 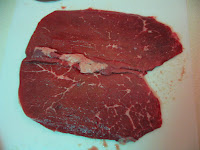 Which is great if you have people who like different things, like I do. With all that meat you can do individual ones. 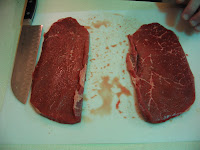 My girlfriend wanted hard boiled egg, no cheese and no onion. I wanted onion and cheese. So I cut the meat in half and piled on the bread crumbs mixed with egg (I used whole wheat bread to make the crumbs this time, since it's what I had. Worked out fine.), nicely browned bacon (no prosciutto this time), hard-boiled egg on hers and caramelized onion on mine. 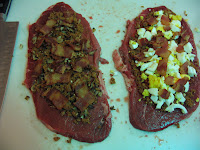 Wound up not using any cheese since my girlfriend says the provolone smells funny and didn't want any in the sauce. I mixed some into my portion later. Heh. Then it's rolling time. 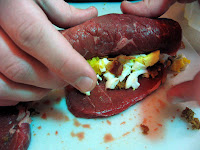 With my girlfriends portion I relearned that they can be over loaded pretty easily. A bunch came out the end, but most stayed in. With mine I learned that less filling makes it much easier to roll. Well, I had figured that would be the case anyway, but now I have experimented so I have actual evidence. This time I got pictures of the tying too since my girlfriend was around and could lend a hand with it. First, a toothpick to hold it closed while I fiddled with twine. 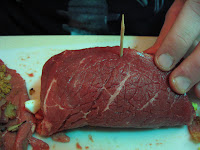 With these smaller ones I just used three ties. Two lengthwise 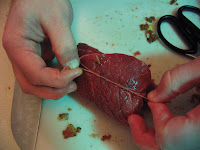 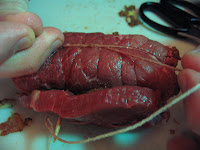 and one around the middle. 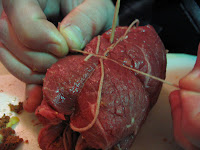 With the lengthwise ones I pushed the ends of the meat in a bit so the twine would hold them closed. 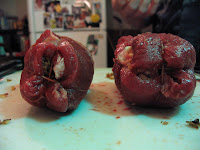 Worked out pretty well, if I do say so myself. Now it's just brown 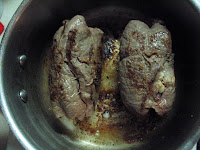 and simmer in sauce for several hours. 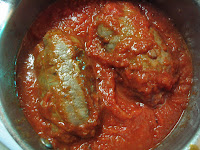 These ones were in the sauce for almost 3 hours and still could have had more time. Apparently they were a different cut of beef than the last time. They still came out wicked good though. Here is what my girlfriends looked like when it was done. 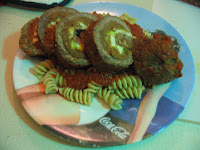 Heh, she was having a hard time holding herself back to take pictures at this point. I had to slap her hands several times when she reached for it. I couldn't get a decent picture of mine since I'm still learning how to use this camera, accidentally changed a setting and didn't notice till too late. But here is one that has been heavily doctored so you can at least tell what it is. 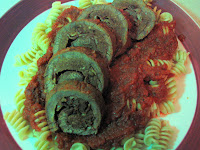 So there you go, that's how I made individual braciole. I recommend doing this yourself, they are really, really good. Interesting side note: I haven't gotten a single hit for "braciole" from search engines. But "bracciole", the incorrect spelling, gets around a dozen hits a week from google. Apparently I'm not the only one who can't spell.
Email ThisBlogThis!Share to TwitterShare to FacebookShare to Pinterest
Posted by Bob Labels: bacon, beef, italian-esque, main dish, pasta at 11/25/2008 03:54:00 PM

I love Braciole. I have never had it stuffed, how yummy! And I am really liking what you stuffed it with, I bet that added a lot of flavor.

Thanks Reeni! It did add lots of flavor, it was wicked good. I thought braciole was always stuffed, how do you make it without?

This is wonderful! Nice step-by-step!

Third time's a charm, huh? To me it looked great every time!!!!

Thanks, Clumbsy and Michele!