I Know, I Promised

I made a shrimp related promise and after several days there isn't any shrimp to be seen. But you see, there's a reason. That's going to be a big post with one real recipe and a smaller, side dishy kind of recipe so when I do write it up I want to be in better form than I've been the last few days. I need to wait until the muse strikes me, which now that it's on the screen instead of in my head sounds more painful than inspiring (not to mention pretentious, heh.). So while I'm waiting for that to happen, here is a piece of pizza. 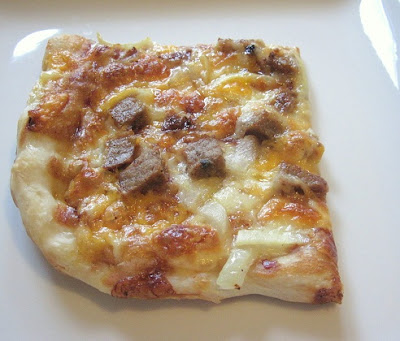 It's meatball, bbq sauce and onion. It was quite good. Here is the same flavors, except with Swiss instead of mozzarella and cheddar, in a calzone. 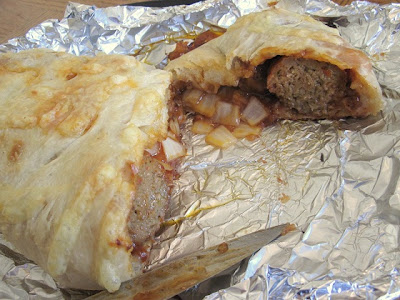 It too was quite good. Hopefully that will at least slightly make up for my grievous miscarriage of shrimpitude.
Email ThisBlogThis!Share to TwitterShare to FacebookShare to Pinterest
Posted by Bob Labels: cheese, meatball, onion, pizza at 4/04/2012 07:19:00 AM

Does the real Bob hang around you when you prepare your shrimp? :)

One of my cats used to do it. She had a magical sense of figuring out when I was prepping. She used to yell for it.

@Skytalon: Huh, now that I think about it, no. Which is surprising, he can wake up from a dead sleep when I open a can of tuna and the only time I've heard him growl was when Romeo tried to take shrimp from him years ago. Weird.

and i just had a boring ass salad

@vanillasugar: Salad isn't bad, but the only time it can compare to pizza is when it's used as a topping. For pizza. Heh.