I had never heard of a loose meat sandwich until recently and honestly when I heard the name my first thought was "sounds weird". 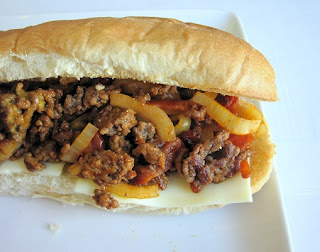 But when I saw some recipes my mind was changed to "sounds awesome". Most of them don't have any sauce to speak of, otherwise they'd be more like sloppy joes, but this version has a bit of one. It's not much though, mostly just for flavor. I don't have a specific recipe for this, I whipped it up on the fly. But it turned out wicked good and I got some pics, so I'm going to share it. 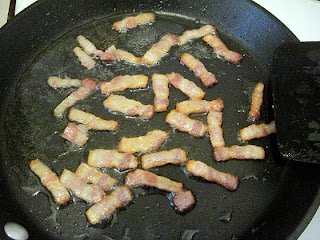 It's not a bacon cheeseburger anything without bacon. Then hamburger, of course. 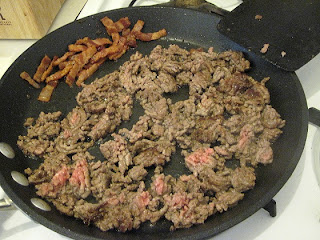 Browneder is better, more flavor that way. Then some onions, because I like onions. 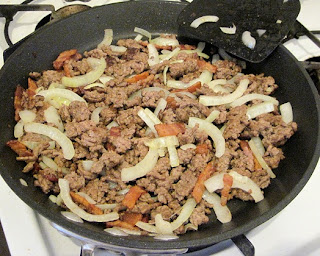 I didn't cook them thoroughly, I wanted a little bite left to them so they'd be reminiscent of the raw ones you usually get on a burger. But it can be done however you like, of course. Then some ketchup and mustard, because I like to keep it simple. 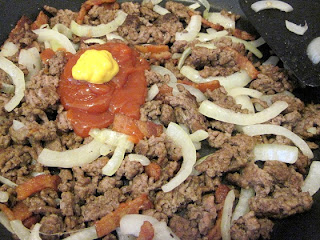 This would also be a great thing to use bbq sauce in, although that would make it practically sloppy joes again. You could do anything that you would put on a burger though, just enough to give it the flavor you want. 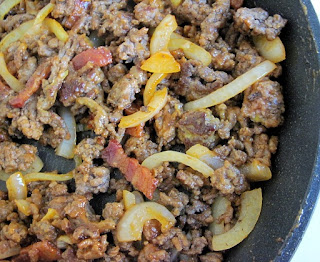 And that's it, except for the bun and cheese. Next time I'm going to mix the cheese in while it's still in the pan, make it more like a steak and cheese kind of thing. That will be good. I wound up putting lettuce on it, I had meant to put some pickles on there too but it disappeared before I remembered. 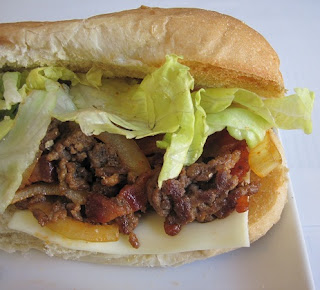 In fact I can think of a lot of ways to do this that would be good and I'm going to post about them in the future. Not only was this awesome, but it was easy and fast. If you're cooking for a group this could be done in like 20 minutes, maybe less. I suppose it could be done that fast even if you're just cooking for yourself, but you get my point. So who has had a traditional loose meat sandwich? Anyone have a recipe for them that they want to share with me? Because that would be awesome.
Email ThisBlogThis!Share to TwitterShare to FacebookShare to Pinterest
Posted by Bob at 4/24/2012 11:10:00 AM

its gross really how much beef i could eat if given the chance
yes, i know i'm a girl, but i love beef. a lot. and would devour this

How about my favorite pork butt one? Pork cooked with green chilies, tomatillos, garlic and lime? Think that'd be good! On a good roll with a little green salsa, maybe.

The name IS kind of scary! But they look and sound insanely good!

My husband and I have a food truck and we serve loose meat sandwiches 7 days a week. I like this recipe! Thanks!