This pizza is fricking amazing. 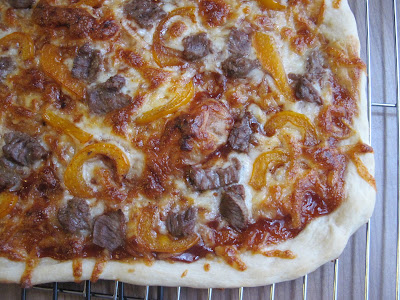 I remembered seeing this post over at How to Cook Like Your Grandmother some time ago and wanted to try something similar. One thing I wanted to change up though was I wanted some vegetables on there, specifically peppers and onions. I also wanted them sauteed, which if you've never done for pizza I highly recommend.

I didn't get any step by step pictures because my girlfriend was home when I was making this and she was all up in my cooking space.

But I have this one showing how the steak is mostly raw before I put the pizza in. 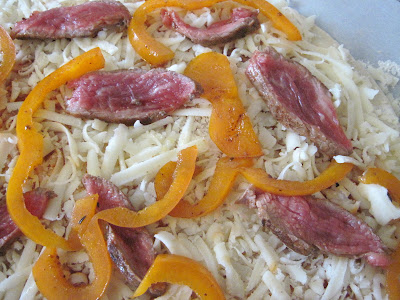 Ok, this is what I did. First I took some steak tips and seasoned them with some salt, pepper, paprika and garlic powder. Then I just seared them real quick, just enough to brown the outside and put a little fond in the pan. Next I sliced them very thin.

Then I sauteed the peppers and onions real quick in the lovely mess that was left in the pan. Not enough to make them real soft, just enough to coat them in the flavors and oils. Then I made a pizza with it. 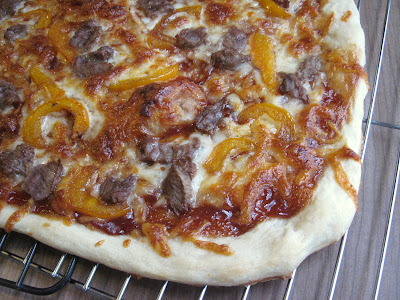 And it was wicked good. 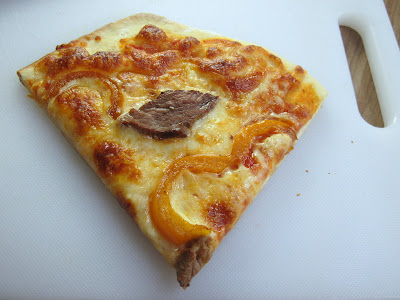 Keeping the steak mostly raw meant it was nice and tender, if I had thoroughly cooked it first it would have been like jerky. I used barbecue sauce for my girlfriends pizza, because she likes that the best, and a spicy tomato sauce for mine.

As for the veggies, not only does sauteing them give them that extra flavor, but the oil coating them helps them brown a bit in the oven and just makes them extra good.

This method is great for steak since even if it doesn't quite cook all the way it's no big deal, but I don't think I'd recommend it for chicken or pork. You know, just in case.
Email ThisBlogThis!Share to TwitterShare to FacebookShare to Pinterest
Posted by Bob Labels: cheese, onion, peppers, pizza at 12/30/2010 10:38:00 AM

seriously. that is wicked good. i am all over that one.
my hubby is not allowed in the kitchen when i cook; i hate having him all in my stuff and space man
happy new year to you!!

I like this, Bob. Great idea on undercooking the steak.

This does look amazing! Perfect pizza in my opinion
Happy New Year