Hands up, who has made a pizza that looks awesome before you pop it in the oven? 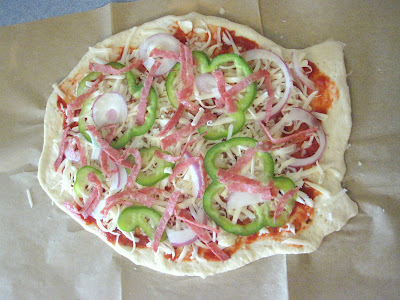 Then you cook it and the pepperoni, salami, linguica or whatever fatty thing you slapped on there in a brazen fit of excess has turned it into a pool of molten grease? 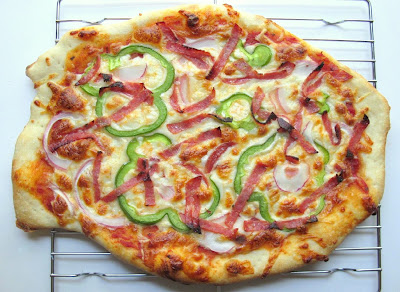 (not pictured: lots of grease)

I know it's happened to me plenty of times. Then I learned a trick, although I don't remember from where, and now my pizzas are better for it. 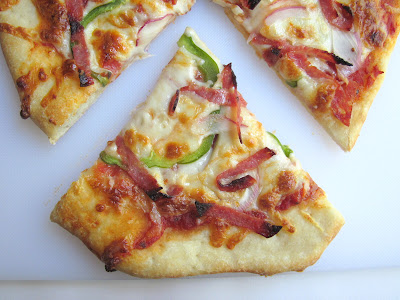 It's easy, just microwave the pepperoni, or in this case salami, between some paper towels for maybe ten-fifteen seconds. 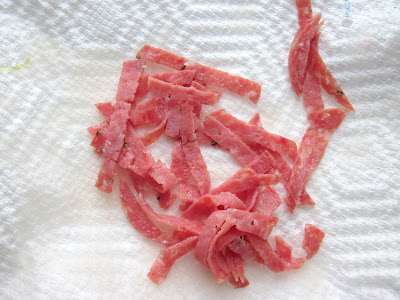 Not only does this make the pizza less greasy but it helps the stuff crisp up really nice, which is a good time. 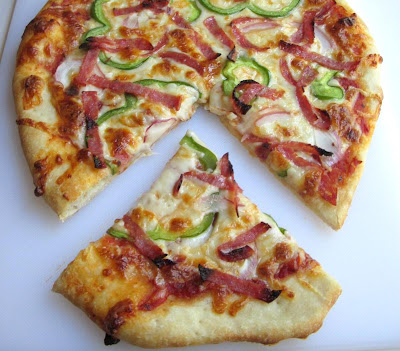 I don't know why you couldn't do this same thing with any kind of already cooked, thin sliced, fatty meat and cut down on the grease. If you're into that. 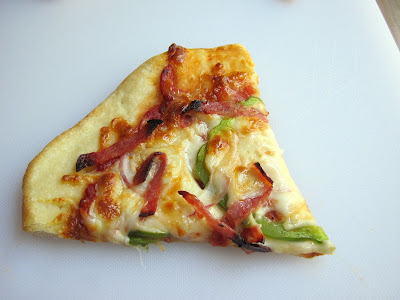 For those wondering, this is a salami, green pepper and red onion pizza (heh, randomly and appropriately seasonal) with a spicy tomato/roasted red pepper sauce (like this one, without the sausage). It was wicked good.

I usually make it several times a week, how often do you folks make homemade pizza?
Email ThisBlogThis!Share to TwitterShare to FacebookShare to Pinterest
Posted by Bob Labels: pizza, sausage at 12/13/2010 04:13:00 PM

Good tip! I haven't made pizza in a while, and I've been craving it lately, so it prob won't be long ;)

Me and My Pink Mixer said...

I'll definitely give this a try next time I make pizza ~ thanks for the tip!

That's a great idea! If I am in the mood for pizza I would make them every other day until we are sick of it then I stop till the next craving hits me:P

I haven't had much of a problem with this but will keep this trick in mind the next time I'm making one. Good tip!

Nice. I've been on a major pizza kick lately. I blame it on my hectic schedule and with pizza being pretty easy to make, too. I do something similar with my pepperoni also except I doa oil-less fry on the skillet to remove the grease then drain on a paper towel.

That's a great trick! But I don't have a microwave. Then again, I don't really make pizza at home. However, yours just might inspire me to do so!

there is nothing worse than having grease pool on top of your pepperoni. Too true. Love your tip!

And man this pizza looks awesome. I haven't made pizza for far too long...

art is in the kitchen said...

Wonderful thin crust pizza you made! Lean toppings too! This is really homemade! I can it the whole pizza without guilt! I think. Thanks for sharing!

oh man, awesome tip, thanks! I hate that...I usually end up blotting the top of the pizza- which is never pretty. I could totally devour that pizza right now, btw.

try a barbeque chicken pizza...red onions montery jack and chedder and if you dont have time to make a crust buy the pizza dought from a supermarket (publix) or get it from a pizza place...

THANK YOU SO MUCH!! I just wanted to say thank you for this tip. i tried it today with a garlic/oregano homemade pizza dough and it turned out 1000 percent better than i have ever made it before. It made a HUGE difference in taste of sauce and dough. My pizza came out like Domino's quality pizza and for a third of the price. i paid $1.50 for the dough materials, $1 for sauce, $4 for cheese (16 oz), and $3.00 for the pepperoni. I also put some Tabasco Pepper hot sauce on my hubby's parts of the pizza. So i just paid basically $10 for the best pizza ever. i have made pizza so many times and this is hands down the best i have ever made it, just because of this little tip. Thank you so much! i stuffed myself today and it was so good.