This is a real fancy pants chicken salad that 's great in a sandwich or just by itself. Also it's best made the day before, so it frees up time on the day you're having your cookout, if that's what you're making it for. 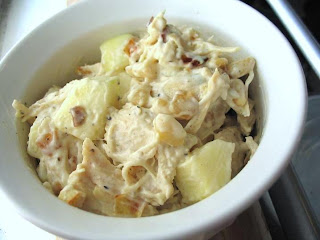 Sorry, this is one where I can't list a real recipe. See, dressing proportions for this kind of stuff is really a personal thing, what I like might not be what you like and vice versa. Plus I have no idea how much of each thing I put in. Heh. But here is what is in it, with some estimates on how much:

cooked chicken, about 1 1/2 pounds (I braised it in chicken broth with parsley, black pepper, sage, rosemary and thyme)
caramelized onion, 3/4 of a cup before caramelizing (I'll do a how-to post on that soon) (update: and I did too!)
pine nuts, no clue
a golden delicious apple, it was kind of small
fresh black pepper, lots. At least a dozen twists on a grinder
sage, maybe a half a tsp.
tarragon, maybe a 1/2 tsp
mayonnaise, quarter cup or so? Probably more.
dijon mustard, about a tsp

So, I've covered chicken salad before. But this one is pretty different and that was an old post that wanted updating. Of course I didn't manage to get pictures of the whole process this time, I thought I had, but here we are. So there will probably be at least one more chicken salad post, some time in the future. Probably in the summer, to make it more topical.

Anyway, I've always kept my chicken salad simple in the past, this is actually the first time I've ever put fruit in it. Or nuts. Both were quite good, I was most pleased. I don't remember when I got the idea to caramelize the onion, but that was probably my favorite part. It gave a lot of great, mellow onion flavor, plus a bit of sweetness. I usually add tarragon to chicken salad, but figured if I was adding apple I should really put some sage in there too. A little bacon would have been good too... 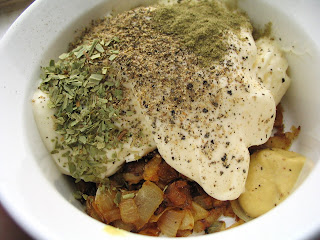 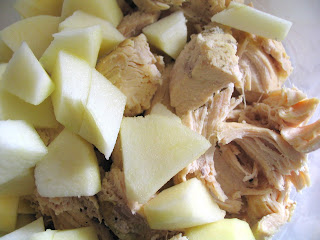 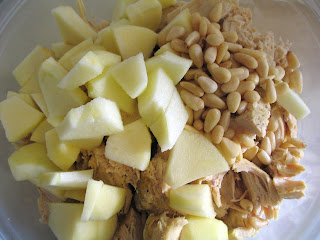 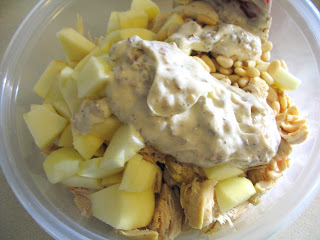 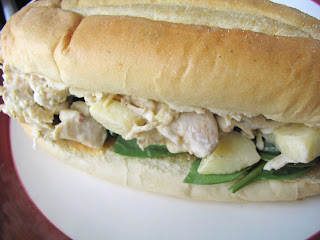 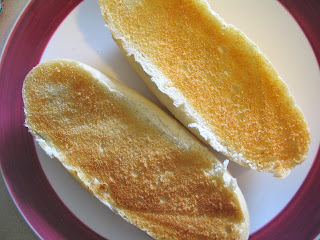 But this was a great chicken salad, I would definitely make it again. Next time I want to use cashews instead of pine nuts, I bet that would be even better. Some prosciutto would have been nice, maybe even some melon instead of apple. A bit of fresh squeezed lemon juice or maybe some zest would add some brightness, especially if adding salted meat. Well, more experiments are clearly needed.
Email ThisBlogThis!Share to TwitterShare to FacebookShare to Pinterest
Posted by Bob Labels: repost at 7/05/2010 09:00:00 AM

I love this combination of ingredients! And with those carmelized onions. I'm so making this. I agree, with these types of recipes, it's a taste as you go and get it just to your liking. No recipe really needed.

I've been eating lots of caramelized onions and pine nuts lately. Think my body is telling me it's time to make this!

Mmmmm...love how you throw everything together without even trying too hard:D Look yummy!

It feels like every recipe that pops up this week and last feature pine nuts, and they're so dang expensive right now! This is a nice switch from chicken salad with tarragon, walnuts, grapes, etc. Very nice!

its true sometimes you really don't need recipes. most of the time i dont even use measurements but only for baking though!

I love chicken salad. Never thought to put something cooked in it (besides the chicken, natch), so the carmelized onions is very intriguing to me. Must put on the list to make...