No, that's not what it's called, it's more my reaction to said salad. 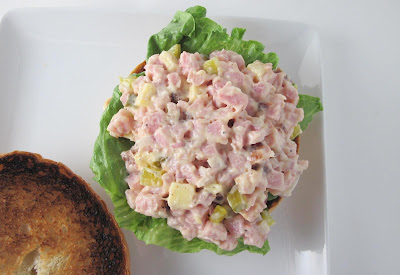 See, I had never had ham salad before I made this and I have to say for something that is loaded with stuff I like I really wasn't impressed. Although it might have been my fault, which is why I'm asking you, my readers, for help. Perhaps I should start from the beginning.

I had a chunk of ham and I wanted to make salad out of it. So I did. I looked up several recipes, realized it was just like any other mayo based salad and just kind of whipped it up. 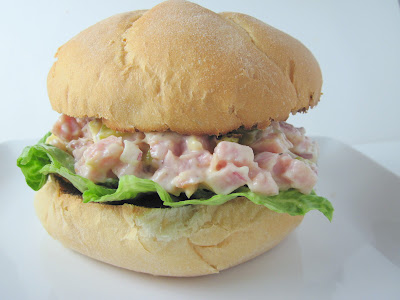 It had mayo, mustard, pickles, some chunks of cheese, you know, good stuff like that. And it was way, way too rich.

I don't know if I added too much mayo, if I should have put the ham in a food processor to make the chunks smaller (I cubed it originally) or what but it was just too rich. I do think part of it is that I used too much mayonnaise. When I make chicken salad I expect the chicken to absorb a certain amount of it, but ham doesn't seem to do that so I miscalculated how much I needed a bit. I think. 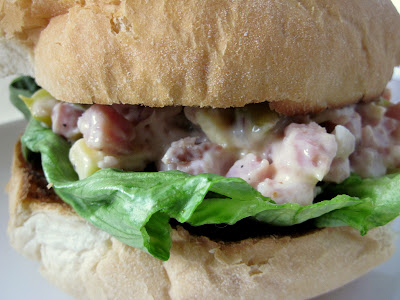 I also might have wanted to use a less smokey ham, the one I used was pretty strong. So, does anyone have a good recipe for ham salad? I want to not let one bad experience with it ruin it for me, but damn, it just wasn't very good.
Email ThisBlogThis!Share to TwitterShare to FacebookShare to Pinterest
Posted by Bob Labels: cheese, ham, salad, sandwich at 7/12/2010 09:00:00 AM

That looks good! I am happy to toss that with some pasta too!

Like you, Bob, I'm not crazy about ham salad made that way, despite liking all the ingredients. I found a Rachel Ray recipe a while back which had smoked almonds and olives which was quite delicious.

I've never had ham salad before so I am not much help.

I've heard about this ham salad business and honestly, since I'm not so crazy about mayo or ham...I have a feeling I wouldn't adore it. Chicken salad though. I like.

I've never tried ham salad (I'm more of a tuna fan.) But, I think yours looks fanastic! I'm in love with mayo so by default, I tend to like anything it goes on.

i would have made a paste like consistency with ham then added in a bit of mayo and dijon mustard, then tossed in chopped onions. i think that might work?

I love ham salad... when I make it, I put the ham in the food processor. Also, I only use a little mayo... and lots of mustard. It looks great!

LOL!! Sorry for the over used expression but you had me at "WTF Ham Salad". I've never made ham salad before either but I used to work with this old guy who made his ham salad with cans of potted meat. Now that was really WTF ham salad.

I have never had nor made ham salad, so I am afraid I am of no use to this posed question.

Im sure you'll get some great suggestions though!

My ham salad starts in the food processor and pulverizes the ham into almost a paste. I like ham that is salty sweet, so I add honey mustard (either commercial or whip up some of myself) and then a scant amount of mayo. The ham should be the first source of moisture, the mayo should just bind it together. I usually cut up gherkins into medium chunks and then spread this deliciousness on Triscuits!!

One thing you should always remember--my grandma told me this--is to never, ever, ever put raw onions in ham salad. It'll turn it sour.

Other than that, it sounds like you just need to refine your recipe a little.

Yes, use the food processor, or use an old fashioned meat grinder. My grandma had an old hand-crank meat grinder (I have it now) and she made it look so easy, but she must have been stronger than I thought, because it is HARD to turn that handle!

Also, if you were to buy a large chunk of beef bologna (or turkey bologna) from the deli, that makes a nice replacement for actual ham in a sandwich-spread type of salad. Grandma had lots of good ideas! :)

That looks really delicious, something my kids will actually eat. I love making ham myself and my kids enjoy it whenever I make ham based dishes for them. Ham and pasta is their favorite. This ham salad sounds really promising, I think they will love it! Thanks for sharing!

The ham salad I remember from my childhood was ground up ham mixed with mayo (or Miracle Whip), relish, seasonings and eaten on white bread, used to stuff deviled eggs and spread on dinner rolls.

Amy of Sing For Your Supper said...

I've actually never had ham salad either, but maybe next time you could try adding a little non-fat yogurt along with just a little mayo- that way you still get the creaminess, but not too much richness. Just a thought. Sorry you didn't like this- it looks really good, though! :)

My mom made the best darn Ham salad. I'll have to try and find her recipe and get back to you. I agree, the smoky flavor might be a little over powering. When you get a good ham salad, it rocks.

Never made ham salad before. It is a good alternative to the ol' chicken salad. Definitely perfect on a sandwich.

I think the not soaking up the mayo is your biggest issue. Ham already is so moist. I am not a huge fan of ham myself so I will stick to chicken.

I could enjoy a good ham salad but, don't have a clue how to make it well. keep trying, there is a perfect ham salad recipe out there somewhere.

I have to agree with VanillaSugar. I probably would have made something closely akin to "Deviled" ham salad. Though I am intrigued by Rachel Ray's addition of Almonds & Olives.

I gotta be honest though... I don't normally eat "Meat salad" LOL Like Chicken, Turkey & Ham...

Occasionally I tuck into a good Tuna salad.
But I have to admit, that DOES look tasty, sorry you were under-whelmed by it.

You know what....I had the same reaction to my first ever ham salad last year. Wasn't impressed and it was too rich or mayo greasy or something. The ham flavor didn't pull through. I think I'd rather just eat the ham by itself :)

You might try cutting the mayo with some low fat dairy product, such as the already mentioned yoghurt. Another trick is to add vegetable matter, maybe finely chopped leeks, green peas, finely diced apple. A tart apple with ham is one of my personal favourite combos.

I really do not like ham salad that much because of the too much salt I always experience. EXCEPT the German ham salad. I could eat that everyday it is a treat for me. Look up Fleisch salat on Google. i think they have some really good recipes. The one I used to have was at this German deli and I think besides scrapes of ham (not smoked) they threw in other German deli meat scrapes. like German bolonga, mild meats. It was amazing.

I've never actually made a ham salad but I LOVE cheese or egg salad! Especially with green onion, celery and mustard mayo.

I over mayo 'd my ham salad too. Is there a way to salvage it?

@peteman I think the only option is adding more ham. I also chop it much more finely now, sometimes even use a food processor.