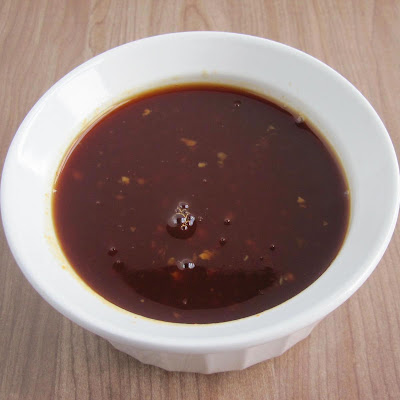 Mix everything together in a sauce pan. Bring to a boil then reduce heat to a simmer and let reduce until it's thick, about 20-30 minutes.

"Huli!" the cooks holler (apparently), just before turning the ten foot long rigs laden with dozens of glazed chicken. The customers stand in the tropical sun, waiting for their sticky, sweet and garlicky lunch, smelling the woodsmoke and flower scented breeze. Or so I'm told.

See, I've never been to Hawaii. And between not being into beaches, fruity drinks, lava, giant bugs or tropical heat I've never been too interested in going. But now that I know there's a unique barbecue there to put in the "pro" column along with dancing girls I might just be into giving it a visit. Heh.

Huli huli is like a cross between barbecue and teriyaki sauce. I had never had it, but I read about it a while ago and was intrigued so decided to make some. I did a little research and it turns out there are tons of different ways to make it ranging from what looks like completely savory to sickly sweet. From what I've gathered it's traditionally put on chicken and huli huli apparently means "turn turn", "end over end" or something to that effect in reference to how it's cooked. So after being a schoolboy for a while I mixed and matched what I found and made this.

I don't usually do ingredient shots, but since there's only really one step to this I thought I would. 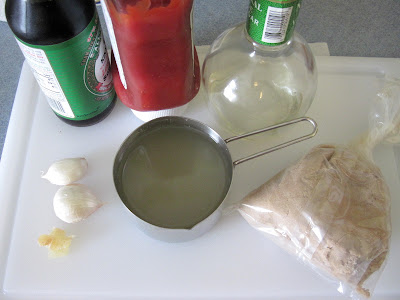 You know, to pad out the post a bit.

Because all you do is take that stuff, put it in a pan and simmer it until it's thick. 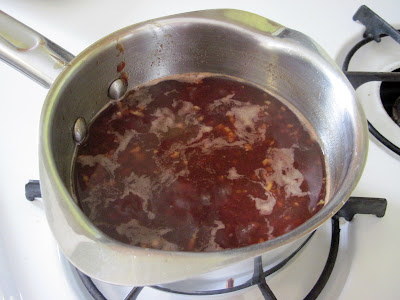 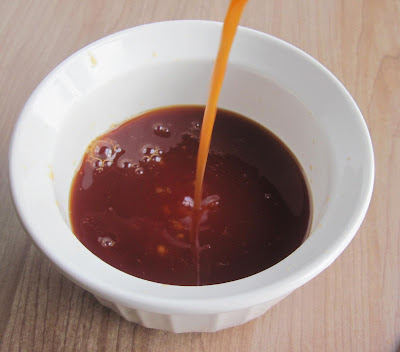 What am I going to do with it? Well, you'll just have to wait and see, now won't you. Because I'm a mean man like that. Heh.

I liked it, although I can't vouch for it's authenticity. Who out there has had real huli huli sauce? If you have, what did you think of it?
Email ThisBlogThis!Share to TwitterShare to FacebookShare to Pinterest
Posted by Bob Labels: sauce at 7/28/2010 10:02:00 AM

A very interesting sauce...if it has a teriyaki touch, then it must be good!

The sauce sounds good and I can't wait to see what you used it for.

The name is fun, I'd have to make for that and because it looks dadgum good!

I'm thinking it would be good on pork too.

Ok you evil man, show me what you're doing with thus Huli huli Sauce!

Your readers demand to know what you did with the sauce! ;-)

I think you'll stick with tradition and put it on chicken. Maybe even make your brother stand in the hot sun and wait for his lunch...? Are you that mean, Bob?! LOL!

This is new to me. Never been to Hawaii either. I'm sure it is beautiful there but I think it can be overrated. I bet there are better beaches else where!

I'd use this sauce for some chicken breasts on top of white rice and grilled pineapple and peppers!

I've never been to Hawaii, but the sauce sounds like fun. Huli Huli!

Mmm...the possibilities for this sauce are endless...bbq, grill, braising, on different kind of meat...delicious! Like the name too!:D

I love condiments. Except for mayo. You know how I would eat this if I were you? Pulled pork. All the way.

Can't say that I have heard of huli huli sauce before. Can't wait to see what you do with it!

what a cute name, sure sounds delicious!

I look forward to hearing what you do with this. I've been to Hawaii about 10 times and never encountered it...must have been missing out.

I think Raichlen has a version of it in Planet BBQ, I'll check.

If it was me, I'd try it on chicken or pork loin. Can't wait to see what you do.

ive been to Hawaii a couple of times and probably had huli huli but its been so long that I don't remember (it was before I became so obsessed with food LOL). I'm going to give this a try :)

I never even heard of the stuff but it looks really tasty! And the name is fun!

My husband would have this huli huli sauce brushed on meat cooking on the grill. Looks really good.

Forget chicken. That has pork written all over it!

Lived in Hawaii for 10 years. Huli Huli chicken is one of the few things I miss after I left. Goes great on ribs too!

Thank you thank you! As a long-time fan of the original Huli Huli sauce, I was sad to give it up when a gluten allergy reared its ugly head. But now I can make my own, yesss!