I Went on a Trip

All those reposts a couple weeks ago were a cover for a trip I took with my girlfriend, my brother and sister in law. We went to Chicago and then did a little road trip to one of my sisters for a family reunion. It was a good time, lots of good food. The food in Chicago was particularly awesome, although I'm afraid I'm still not a fan of Chicago style deep dish pizza. 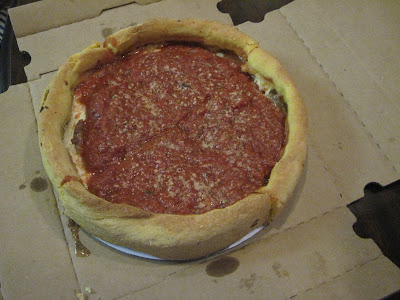 I mean it looks good, but I just don't feel it. 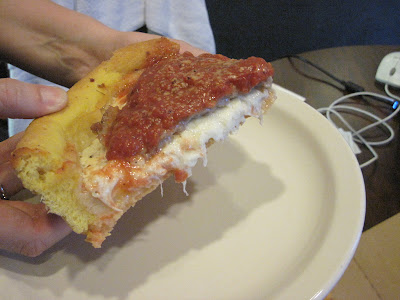 I really prefer my cheese on top and a lot less sauce. This here came from Gino's East and the flavors were all fantastic, it's just the assembly I take issue with. 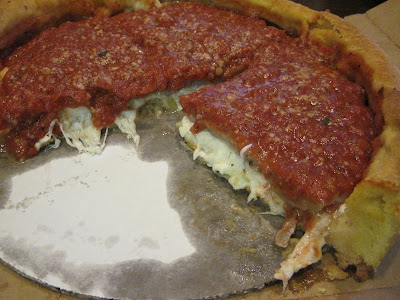 I did like the disc of sausage the size of the whole pizza though, that's a nice touch. Heh.

We also went to a restaurant called Heaven on Seven where I had, hands down, the best barbecue I've ever had. Unfortunately I didn't manage to get good pics of that stuff, but if you find yourself in Chicago I highly recommend it. They specialize in Creole (I think), but the barbecue was just unreal. 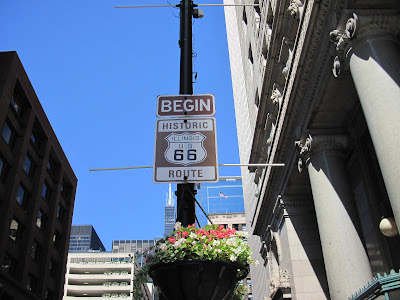 We took a piece of Route 66 during our trip and decided to stop at an old school burger place, the Launching Pad, complete with giant fiberglass eyesore. 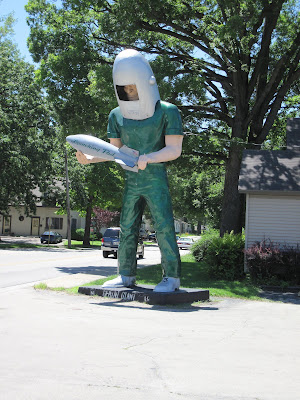 I got a burger and it was awesome. 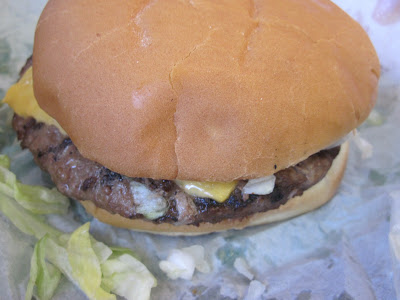 It's what I imagine fast food used to taste like, back in the day.

Chicago style deep dish is a bit of a love it or hate it thing and I want to know where people stand. Who likes it, who doesn't and why?
Email ThisBlogThis!Share to TwitterShare to FacebookShare to Pinterest
Posted by Bob Labels: hamburger, pizza, random stuff at 7/26/2010 10:11:00 AM

I've never had a Chicago deep dish pizza before. I'm not a huge meat of pizza person, so I know I wouldn't like all the sausage they load on. Plus I'm with you on the sauce, I don't like a huge amount of sauce on my pizza.

How was the dough? That deep dish looks like a hot tub. LOL

We ate at Gino's East when we were in Chicago a couple of weekends ago. I like it, but it isn't my favorite. I'll have to check out your other dining suggestions. I love Chicago - so much to do.

Sounds like a fun trip! I've never been to Chicago.

I'm ok with deep dish pizza but would always choose a thinner crust over it. I'm with you...I feel like the sauce is often overpowering.

I feel ya on the pizza...light sauce, cheese on top and losts of it and thin and crispy for me.

Having never been to Chicago, my only experience with it is Uno's. I do like that. But my favorite will always be Wakefield House of Pizza!

Fallon: The dough is more soft than chewy, but crispy on the outside since it's basically fried in the pan. It's tasty, just not what I look for in pizza.

Spryte: We might actually be getting a car in the near future and if so I want to check out WHoP to see what all the fuss is about. Heh.

Even though I grew up in Chicago, I've never really liked deep dish pizza. Too much stuff.

Never been to Chicago and never had it with sauce on top. I put the sauce on the crust when I make it ...I don't like a lot either.

You are super sneaky, bob, what with these "reposts" and all. I hear the food in chicago is supposed to be awesome. you should have checked out Rick Bayless's Frontera Grill!

It is not my preferred style but I still like it

I love Gino's, but then I love pretty much all pizza. We were only in Chicago for 24 hour or so, but I expect we will be going back. There is so much more food to try!

Nice posting..
thanks for sharing.

The pizza does indeed look awesome, but I agree, cheese on top, slightly browned and bubbling, for loves sake!

Mmmm that looks like my kind of pizza! I love a ton of sauce and I wouldn't mind trying the cheese on bottom. I think I need to try making this at home!

Family reunion! Sounds wonderful. Hope you're having a fabulous time with your sister. And enjoy your trip.
Best wishes,
Kristy

We had a really good Chicago style pizza while in Chicago but cannot remember name of restaurant. Ours didn't appear to have as much sauce as yours and we had half pepperoni and half just cheese for the kids. Plus their bread and olive oil dipping sauce. Yum! We can get that style pizza at Green Mill-it is okay, but not as good.