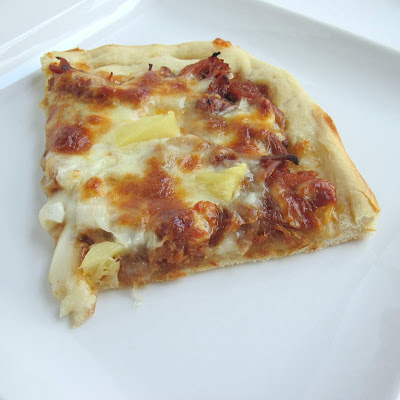 Preheat oven to 450. Combine the shredded pork and huli huli sauce in a small saucepan and simmer for 5-10 minutes. Roll out the dough, cover it with the pulled pork mixture and top with cheese, pineapple and onion. Bake until browned and crispy.

I have to admit a certain amount of surprise that no one guessed I would be making pizza with the huli huli sauce, although Joanne did say pulled pork so that counts for something. Heh. But pizza is what I made and it was good, although honestly I like regular tomato sauce better. This was a bit too rich and sweet for my taste. My girlfriend liked it, although she also thought it rich too. Maybe the half pound of pork had something to do with that... hm.

A while ago I slow cooked and shredded a pork shoulder that was seasoned with just salt and pepper. Then I froze most of it in various portion sizes, one of which was about a cup worth. That's what I'm using here.

I poured the huli huli sauce in a skillet and heated it up a bit. 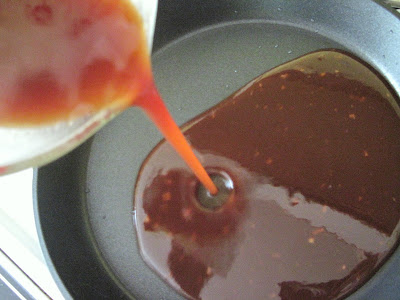 Then I just plopped in the frozen pork, even though I really should have defrosted it first. 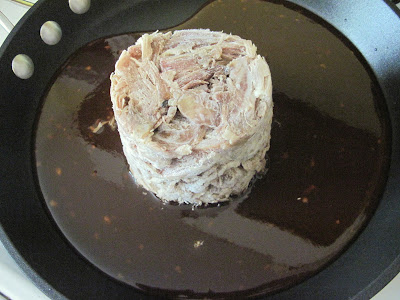 I tossed it around over low heat until it had thawed and the sauce had thickened a bit. 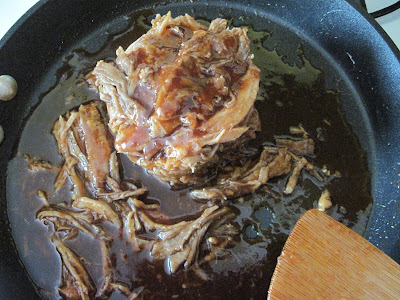 At which point it would be great for a sandwich or burrito. 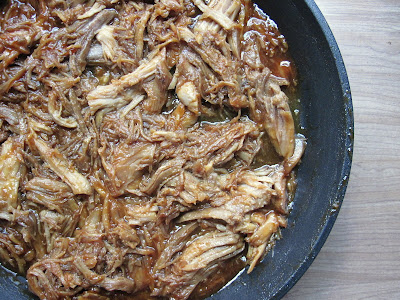 Just saying. But what I did was spread it on some pizza dough, 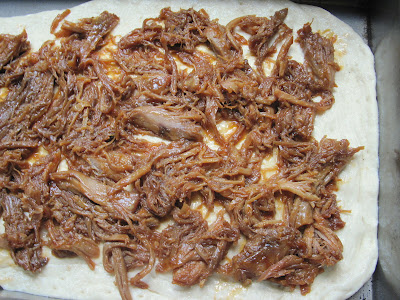 generously topped it with cheese, onion and pineapple 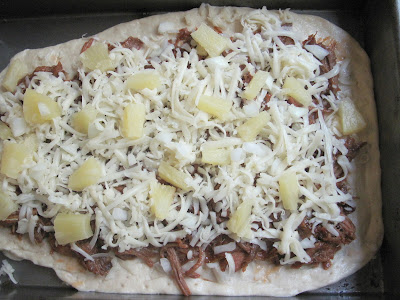 and tossed it in the oven. A short time later, I took it out. 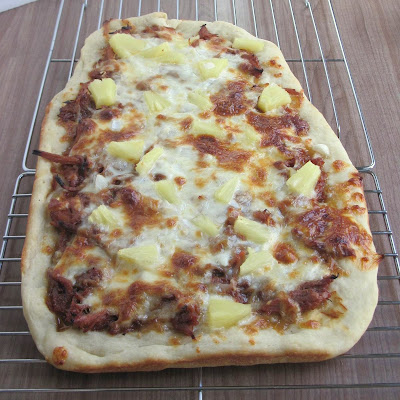 Lovely, isn't it? I did it in a pan because my peel broke some time ago and I was out of parchment paper. 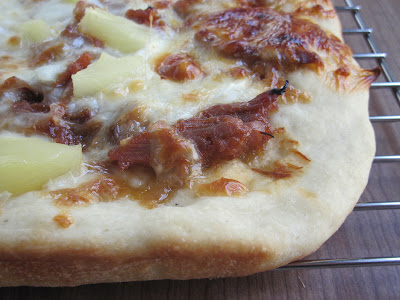 But it gave it some nice crust bits and really it's all good. 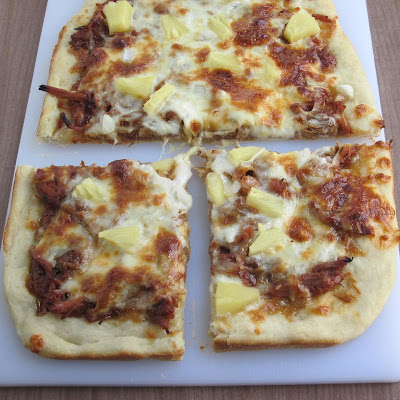 This pizza was serious business, I could only eat half of it and that's really not that much for me. I've done pizzas with shredded bbq stuff before and it's always been good. 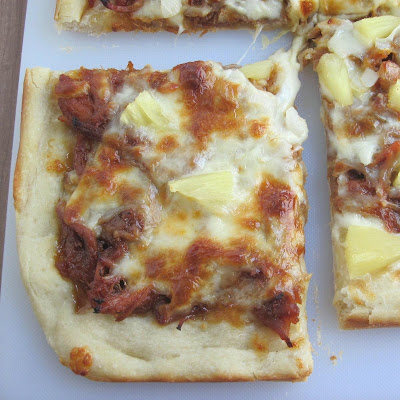 And there was nothing really wrong with this one, it's just not a "why don't I sit down and eat an entire pizza by myself" kind of thing. More a "I'll have a couple slices, a salad and a nap"situation.

So I've met people who can't even take the thought of pineapple on pizza and people love it, where do you guys stand?
Email ThisBlogThis!Share to TwitterShare to FacebookShare to Pinterest
Posted by Bob Labels: bread, cheese, fruit, pizza, pork at 7/30/2010 09:00:00 AM

There's the pork! I would totally put pineapple on that.

Looks good! You are very inventive with your pizzas. I like it.

Yummy! Looks good with all the pork and pineapple combination!

Hubba hubba for the huli huli! That looks great.....and I LOVE pineapple on my pizza. That bit of sweet to temper some of the spiciness. Yum!

see now we're talking. this is a pizza i could eat everyday. love it!

OMG, that just made me sooooo hungry! Nice job!

I should of known! Pineapple is ok...it's not one of my go-to's. And it depends on what it's paired with. I can see how it would totally work here. This sounds so rich - if it made you want to eat a salad? haha

Dude. I was TOTALLY half right. I deserve some street cred for that. (I can read your mind! Halfway.)

This looks amazing! I am SO trying this.

A good pizza even if you didn't want to eat the whole thing at once. Pineapple? Not a big fan of it on pizza but love it with pork and chicken.

I like pineapple on pizza, although I never used to. It took actually having a great "Hawaiian" pizza in Hawaii to bring me around! I think it had to do with the tomato sauce which had a fiery kick to it--helped balance out the sweetness of the pineapple. Plus the salty ham didn't hurt...

It is lovely. Looks really good. A creative use of ingredients for a pizza.

That sounds frickin' amazing! I have to make some of that huli huli sauce...if just to say the name more often! Great combo...me likey on the pizza!