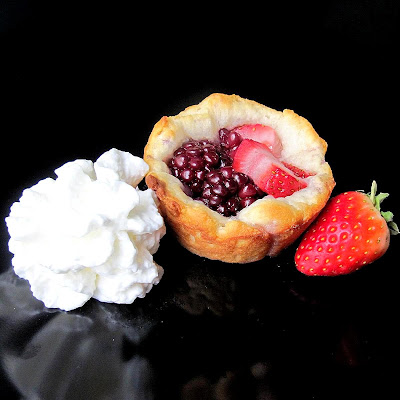 Man, it seems like forever since I've done a post about biscuit cups. Heh. But seriously, my girlfriend bought several tubes of biscuits and I have to do something with them. And don't let it be said I never do what I say I'm going to. I filled them with fruit this time, just like I said I would in my post last week. And it was wicked good. So, here is the post I have that tells you exactly how to make the cups, just ignore the egg and bacon... well, no, don't ignore them. Make them too, they're wicked good.

You could even make both of them at the same time. Then your meal would have all the major food groups: grain, bacon, butter, sugar... er, eggs... Hm. Anyway, the fruit cups.

First off, I macerated some chopped strawberries and blackberries. 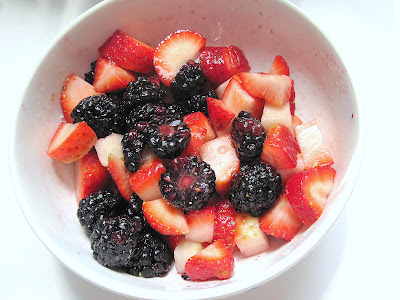 I'm not sure how much sugar I put in I'm afraid, probably ~1 tablespoon, plus a drop of vanilla. I let that sit for a couple hours. Then I made the cups, filled them up with fruit, a little of the macerating liquid and dropped a tiny bit of butter on each one. 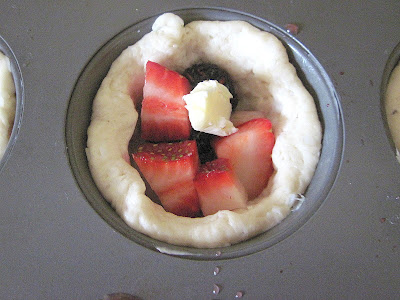 Because I can. Then I baked them. 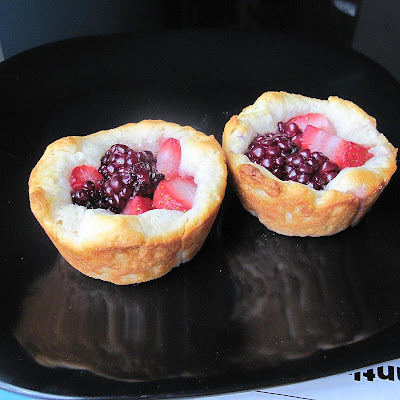 And we ate them. And they were awesome. Especially with a little whipped cream. We wound up just putting it on top, it's really the most efficient way to do it. 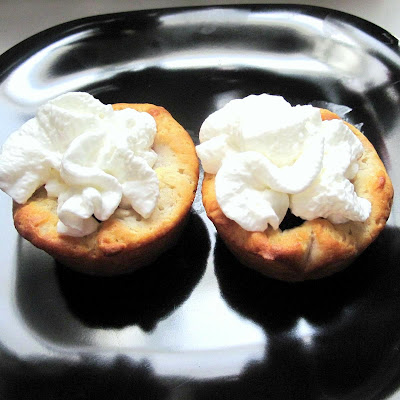 Ok, I promise now, no more biscuit cups. Until I do the peanut butter and chocolate ones.
Email ThisBlogThis!Share to TwitterShare to FacebookShare to Pinterest
Posted by Bob Labels: berries, biscuit, breakfast, dessert at 1/13/2010 12:00:00 AM

It's been a while since I've made biscuits too. Looks really good with the fruit and whipped cream. I love the first photo, too. Nice!

What a great way to use up the biscuit dough.. gorgeous fruit and whipped cream, delicious treat!

Very nice! I think the biscuit/berry combination would be great - especially with whipped cream!!!

biscuit batter, yeah how clever to shape them that way.

Very pretty looking Berry cup. I am sure they are scrumptious!

they look so pretty... might consider putting just a bit of marmalade as a glaze before baking, no need for the whipped cream!

These sound delicious, kind of like little berry shorbreads. Yum.

Looking forward to the PB & chocolate biscuit cups too!

Very nice photography. I thought you said Santa didn't bring you a new camera...? Or are you taking art classes?

Anyway, they look lovely. Extra bonus that they are pretty AND edible!

Joanne: Oh I plan to. I just have to figure out what to do first. Heh.

Year on the Grill: I'll try that next time, sounds good.

Goldie: Heh, thanks, but neither. I think I'm just getting used to using GIMP.

What a lovely creation!

I would love both biscuits together at the same time! These look scrumptious! I like biscuit cups!

These biscuit cups are stunning-wow!

Biscuit cups sounds so yummy with berries, love it!

How did you get the fruits to stay so fresh looking even after baking?
Amazing!

This is such a delicious idea! They look so cute, and also dangerously moreish. I especially love them with the whipped cream - cute :)

Simple and delicious! Although I am partial to the bacon ones..

They look scrumptious. I’m looking forward to being a regular follower!Nice share!!

These really do look mouth watering. What a delicious treat!

they look so pretty! It's been ages since I made biscuits too!

OK, these look REALLY delicious!!! And I shall be waiting on the edge of my chair for the peanut butter & chocolate ones...

such cute and pretty nibbles! and I like to top the fruits with whipped cream!

Nothing beats biscuit cups with whipped cream!! I think I these served sweet vs savoury like the ones you did before.

Such a great photo.. simple and soooo good!!!

So pretty - what a perfect way to use up those biscuits!

A bit late, but have been meaning to say: that first photo is so dramatic! These look gorgeous.

those look so good! and ya, that first photo is very nice! did you get a new counter top or something?