Ok, I think it took longer for me to write the name of this post than it did for me to eat the sandwich. 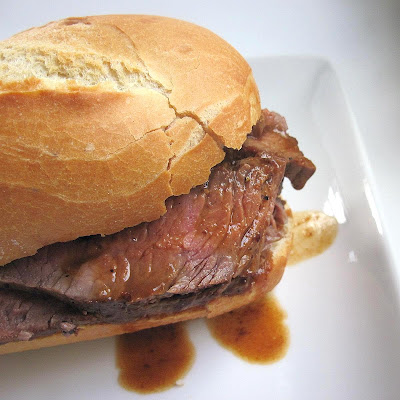 I mean look at that, how good does that look? It was also wicked easy, which is always a plus. All I did was pan sear a petite sirloin (they were on sale! Yeah!) after rubbing it with salt, pepper, garlic and onion powder, make a pan sauce with the fond, slice it thin and serve it on french bread. Good frikking times.

I did use a little trick to get tons flavor into the sauce though. Since the steak was thick (~1.5") I covered it and reduced the heat for part of the middle period of cooking. This caused it to release a whole bunch of juices, which I then collected. The juices partly deglazed it before the final deglaze, which kept the fond from burning during the long sear. When the steak was done I deglazed the pan with some water and the juices, reduced it to about 1/4 cup, added a tablespoon of horseradish mustard and a pat of butter. This turned it into, essentially, gravy. 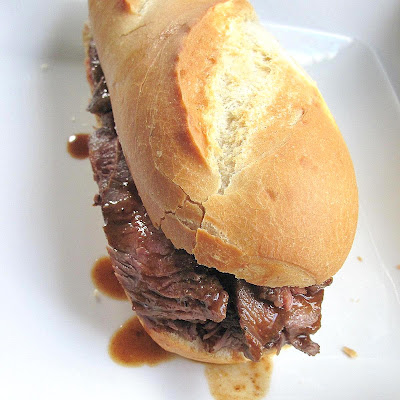 Oh, I also added the juices from the steak after it rested. You've got to have those. But that's it and it was quite possibly the best steak sandwich I've ever had.

Also, the inimitable Joanne from Eats Well With Others gave me awards! Isn't she sweet? Kreative Blogger and Sugardoll awards, to be precise. If you don't already, you should check out her blog, she's a great storyteller and cook. Now I know I haven't been playing the awards game lately, but I do enjoy the ones with the trivia so I'll at least play along a little. Course, I can't even remember when the last time I gave a list of random tidbits about myself so if I repeat anything, I apologize in advance. I'm just going to do like Joanne did and list 10 things. However, unlike Joanne I'm going to be a spoilsport and not pass it along. Sorry kids, it's just how I roll. Now, let's see... 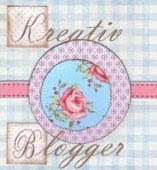 1) When I was in my early 20's I spent several years driving a forklift in a chemical plant. I enjoyed it at the time, but looking back it reminds me of nothing so much as Axis Chemicals from the first Michael Keaton Batman movie. Not a well maintained place.
2) I also worked for an independent record label in the warehouse when I was younger. Much cleaner and a lot more fun, since it was a big party atmosphere there. My memories of it are pretty... hazy. Heh. 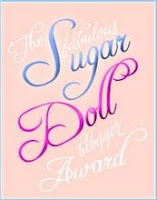 3) I've only left the US once, just over the border to Canada, to get donuts.
4) I love old video games, especially 8-bit and Super Nintendo.
5) I also like ficus's and plan on growing bonsai when I have more room/sunlight.
6) I'm a big Godzilla fan. Not the crappy American one from 2000, but the Japanese ones. They are awesome.
7) Me and my girlfriend have been together for seven years, but this is actually our second time dating. The first was in junior high.
8) In the last ten years I have been to a movie theater twice and have no intention of going to another one ever again. I should be the only one making rude comments during the movie.
9) I used to collect gas masks, I still have maybe 8-9 of them.
10) I haven't had cable in over 10 years and I really don't miss it. All I ever watch is PBS anyway.

Email ThisBlogThis!Share to TwitterShare to FacebookShare to Pinterest
Posted by Bob Labels: beef, random stuff, sandwich, sauce at 1/11/2010 10:18:00 AM

The sammie looks awesome...that sauce had me drooling. Nice job! And congrats on the award. I enjoyed reading your trivia list--though what's the deal with the gas masks? Good for you for resisting the evil cable companies.

You have me drooling all over my computer. Just so you know. That sandwich looks amazing! I love that you used the pan juices to make the gravy. Smart. Move.

thanks for the shout out! I loved reading your fun facts. Super Nintendo is awesome. And that's so cool about your girlfriend - junior high school sweethearts :p

OMG! This looks so good. Your blog is exceptional really enjoyed the visit and share return for another bite soon. Really well done. Thank you for sharing, Cheers, PT

Nice looking sandwich! And the gravy puts it over the top.
Congratulations on the awards... and I thought your trivia list was interesting.
I pay for cable via my apt. (no choice) so I watch it off and on. Rarely go to movies unless my daughter is visiting...she says you miss too much by not seeing it on the big screen. She's right, actually.
Mostly though, I use netflix.

Watch out: I married a guy from high school, and we never even dated then. The sandwich is making me drool!

The sandwich makes me drool, esp. the 2nd picture!

Dude, I swear you're my east-coast-counterpart. I worked in a chemical plant, 8-bit games rock, and I've only been out of the US once (to Canada, just to say I saw Niagara from the other side). And I hate theaters, and haven't had a TV in 3 years.

Nice sandwich, by the way :)

Hungry Dog: Thanks! Heh, I saw a gas mask once in an Army/Navy store and it was only 10 bucks. I had ten bucks leftover after buying what I went in for, so I grabbed it. Isn't that how a lot of these things start? ;)

Barbara: I have to admit that I also watch Netflix. But mostly documentaries. And foreign horror...

unconfidentialcook: Heh, we might as well be married. We're just to lazy to be bothered.

haha I know what you mean, it's such a pain trying to think of names. The samdwich looks amazing!

Cool facts. My hubby and I have started going to the movies a lot now that the kids are grown-for 14 years we barely had a date night, so we are trying to make up for lost time!

And gas masks..really. It cracked me up.

Steak sandwiches and steak salads are two of the best ways to enjoy it. Much better than just a slab of meat on a plate. :)

You said: "I've only left the US once, just over the border to Canada, to get donuts."

LMAO!!! At least you've got your priorities straight, eh?

That is a perfect sandwich, and a wonderful gravy sauce.

Love the trivia... So, what were the two movies you went to see (Guessing Star Wars Phantom menace was one)

I'm loving the horseradish sauce you've got it paired with. Love it.

pigpig: Heh, that's why all my names for things are pretty much descriptors. Thanks!

tamilyn: Thanks! Heh, it would probably be different for my if I hadn't been on a date in 14 years.

Duo: Totally. Although I'm not averse to a big slab of meat on a plate either.

Goldie: I know, right? It wasn't something silly. Heh.

Year on the Grill: Heh, it totally was. And the other one wasn't either of the other SW movies. I think it was Bourne Identity... one of those ones anyway.

Jenn: Thanks! There were some strips of steak leftover after I made the sandwiches, so me and my girlfriend stood over the cup measure full of the sauce, dipping them in it and eating it like that. So good.

mmmm.there is nothing better than a big ass juicy steak sandwich!!

Fabulous sandwich and I just love this sauce - such wonderful flavors to compliment the steak!

yum! I didn't know about that little trick tho. I'll have to remember that!

i am anything for sandwiches! i love sandwiches with steak mmm mmmm

Hey I don't watch the idiot box for about 2 years now and I am glad i stopped. Saved me quite a tidy sum from subscriptions and electricity! Scrumptious looking sandwich. The steak looks so juicy good!

Awesome sammie! I want to reach into the screen and steal it.

The sauce sounds and looks like it packs a punch! The whole sandwich must taste so good.

The sandwich sounds fantastic! And your kind of mysterious - it was good to learn more about you. I love Super Nintendo!

What a gorgeous sandwich. I love the thought of that delicious horseradish mustard sauce you contrived to go with it.

To borrow your own phrase: this sandwich looks wicked good! Look at all that juiciness . . .

Congratulations on your well-deserved rewards. As for traveling outside of the US only once, I can't think of a better reason that to go for donuts - Tim Horton's? 8-P

Hahahaha!!!! "3) I've only left the US once, just over the border to Canada, to get donuts." This just had me laughing out loud.

Am I too late for dinner?

This sandwich looks wonderful. Thanks for the instructions. Whole foods has steaks on sale today and this sounds like a perfect dinner.

Hee hee! Thanks for sharing all those fun facts! It is always fun to learn more about the bloggers behind the blogs!

Hi Bob, it's been so long since I've read food blogs! I like the changes you made to yours. Congrats on the awards and the great price of the steak..hehe. It was nice to get to know you a little better. I don't know how I could live without cable though!!