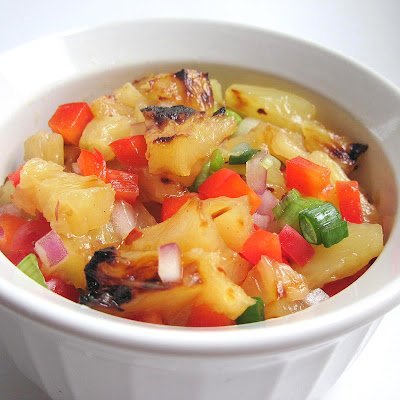 Pat the pineapple rings dry with some paper towels and lay them in an even layer on a lightly oiled baking sheet. Brush the tops with oil and broil each side until lightly charred. Chop them into 1/2" pieces and mix everything together. Chill for at least an hour, preferably overnight.

In my kitchen I have a stack of cookbooks maybe two-three feet high. Now, that's not a lot to most cooks, I know. But bear this in mind: I haven't paid for a single one. That's right, I have never in my life bought a cookbook. Weird, huh? Especially for someone who cooks as much as I do.

Now, some of the cookbooks were presents, like the America's Test Kitchen one that has all the recipes and stuff from ten years worth of the show. My brother gave me it for Christmas, it's frigging awesome. Some were rescued when people were moving and were going to get rid of them, like the Julia Child one I got from my parents. Which is also awesome, but in a different way. And some have been sent to me since I started blogging in exchange for a review. Which is, again, awesome. I mean, c'mon, who doesn't want free cookbooks? This is one that's been sent to me for a review. That's my disclaimer.

The cookbook that we're talking about today is called Dollars to Donuts by Dawn Welch. Apparently she was the inspiration for Sally in the Pixar flick Cars. Now I'm not a fancy big city book reviewer, but I know what I like. And I like clear directions and good pictures. Because really, what's a cookbook without those? This one has all of that. Big, glossy, color pictures, great recipes and lots of tips. She also gives suggestions for combination of sides and main dishes for some of them, which is nice. All in all I really like it, I'm already planning on making many of the recipes. One of them, I already have. 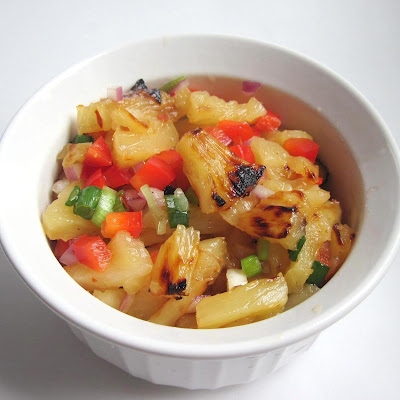 Charred pineapple salsa, baby. This was a great recipe, nice and easy and the charred pineapple is a great touch. We had it with some pork tacos that I'll post about when I find the recipe and they went really well together.

The salsa is sweet, a little spicy and tangy with a great balance. I'm definitely going to be making it again. The recipe doesn't say to, but I would make this at least a few hours in advance, maybe even the day before you want to use it. 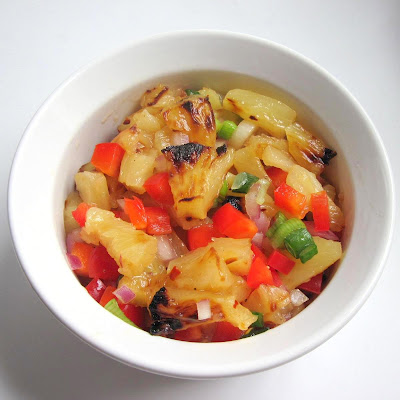 After a day in the fridge the flavors had mingled really well and it was even better than the day it was made. Not really shocking, I know. Heh. I made it just like the recipe said to, except I used crystallized ginger instead of fresh, since that's what I had. This would go great with all kinds of things; fish, chicken, any kind of Mexican food, hell I'd put it on burgers. That would be awesome too. So, looking for a non tomato salsa? Maybe for the Superbowl? Give it a shot, you won't be disappointed.
Email ThisBlogThis!Share to TwitterShare to FacebookShare to Pinterest
Posted by Bob Labels: fruit, side dish at 1/29/2010 06:00:00 AM

I have never prepared pineapple this way..how refreshing and appetizing!

gosh you know I have to be honest I never thought about making a pineapple salsa because I thought how would this go with chips, then I read you used it with pork. huge DUH moment for me. I never would have thought of that one.

I love it. I love pineapple, I love salsa, and I love pork tacos--hope you post that one soon. Never heard of this cookbook...maybe I need to see if I can rustle up a (free?) copy?

Been making this for awhile... great from the grill instead of the broiler as well!

This is a sign. I was drooling over pineapple salsa recipes last night in Coastal Living magazine...this just put me over the edge...I'm buying a pineapple!!!

I love cookbooks with lots of pictures! And I would love this salsa except for the fact that I have a seriously allergy to pineapple. I used to love it though...before the allergy came on about three years ago... :(

Angie: You should try it, it's a good time.

Dawn: Yeah, it's not really a chip salsa, more a condiment salsa. Or side dish, I ate more than a little of it with a spoon.

Hungry Dog: Heh, I wanted to do a giveaway, but they said they were out of them. I might have a different one on the horizon though, we'll see what happens. ;)

Year on the Grill: Oh, I bet. Pretty much everything is better on the grill. I can't wait to live someone where I can have one.

noble pig: Do it!

Joanne: That's terrible! You could probably do it with some other tropical fruits... although I wouldn't recommend banana.

Ooh, I like this with the charred pineapple... it really would go well with just about everything, but I like your first suggestion... pork :)

Pineapple salsa sounds excellent with pork tacos! What a great idea! I wonder how it would be on fish or shrimp tacos.

I love this salsa, it has great flavors and textures. I can't wait to try this.

This salsa looks like some fantastic appetizer that can prepare my stomach for more food down the way.

Yum! That looks great! I could just sit there and it alone. Or maybe over some rice. Mmmm!

Oh, yeah. This one gets three YUMs from me! I love charred pineapple. And with some spicy peppers--YOWza! Thanks for this one.

Looks great! I've only tried grilling fresh pineapple, it's good to know that you can use canned one to add some different flavour.

Anything with pineapple is a winner for me!
YUM : )

looking at the partially charred bits on the pineapple and I could smell and taste this salsa - good job!

I need to make this!! Pineapple looks amazing made into salsa!

Wow--does this look awesome! That charred pineapple had me drooling. I'm definately tucking this recipe away--it will go great with my fish tacos!

What a unique salsa - it sounds great! I actually just bought a pineapple, so maybe I'll make some.

I've made pineapple salsa many times but have never charred the pineapple. sounds wonderful!!

I can imagine what fantastic flavor the charred pineapple brought to this salsa! I'd love to serve it over fish of some kind. Yum!

Oh my oh my, I love anything with pineapples and this looks awesome good! Btw, i have an award for you. Please feel free to stop by and collect the button. Have a nice day!

Ok, that salsa looks amazing. Especially that it's charred. How great would that be on some Jerk Chicken!!