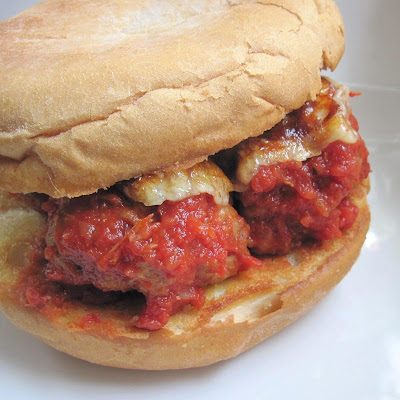 Heat the tomato sauce and turkey ball in a medium sauce pan over medium-low and let simmer for at least 30 minutes, stirring frequently.

Slice the rolls, brush the sliced sides with olive oil and either broil or fry them in a hot pan until browned and crispy. Set aside.

Heat up a nonstick pan on medium/medium-high (or use the one you fried the roll on) and put two pieces of cheese side by side on it. Let it sit for a couple minutes to brown. While it's browning put some turkey balls on half a toasted roll. When the cheese is brown flip it, brown side up, onto the turkey balls. Top with the other half roll and have at it.

Thoroughly combine everything in a bowl. Form it into ~2" balls and bake at 400 for 20 minutes. I suggest simmering them in a sauce of some stripe for at least 30 minutes.

A recipe! Finally. Heh. Well, first things first: props. Neither of the main elements of this sandwich are my creations. The turkey ball recipe I got from my brother many years ago and the cheese is from Goldie over at Confessions of a Serial Baker. 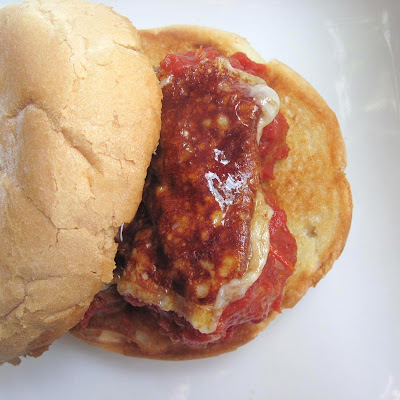 But lets do this in order, shall we? First, turkey balls.

This is one of those "simple is better" dishes. You'll notice there are few ingredients and practically no herbs or spices. They taste like ... well, turkey balls. Turkey is a big flavor, of course, a little onion and some soy come through. The rest is just kind of umami. Which makes them a great foil for sauces.

Tomato is awesome, clearly. But they would also take well to a Swedish meatball kind of gravy, a white sauce or a spicy barbecue kind of thing. In fact, I'm going to make them in a barbecue sauce kind of thing next time, that would be awesome. But, this time it was tomato.

No step by steps, I was in a rush when I made them. Heh, in fact all these pictures are from the next day. Meatballs in sauce are a rarity in the food photography world in that they look just as good as leftovers as they did when they were fresh. I simmered them in a simple tomato sauce, nothing that I measured out stuff for or anything.

While that was going on I fried my roll. I do suggest frying your rolls, if you aren't overly concerned about calories. Although since it's olive oil that makes it healthy, right? Well, I say it does and I'm on the internet and that makes me an expert. 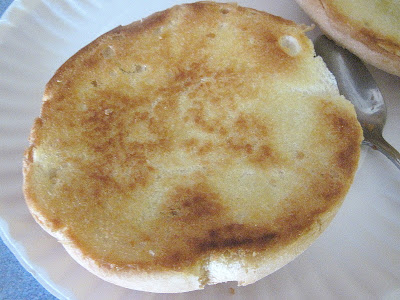 But doesn't that look better than toasted? You know it does.

Now, a burnt cheese puddle. When I saw that post I knew I had to have it on a sandwich. So I did, because I'm like that. It's browned cheese, really. As simple as that, but it makes the sandwich so much better. 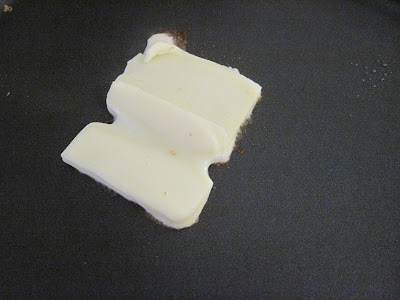 If you only brown one side the other side adheres to the turkey balls really well. Here's a better look at the joy. 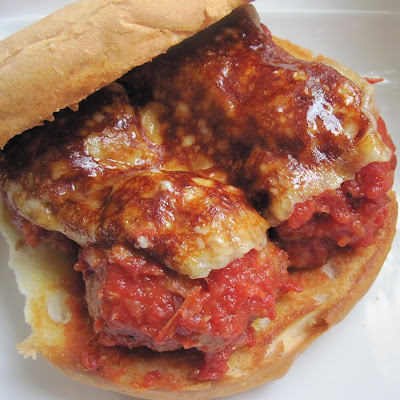 Browned cheese is good, I recommend it. What would you put a cheese puddle on?
Email ThisBlogThis!Share to TwitterShare to FacebookShare to Pinterest
Posted by Bob Labels: cheese, sandwich, sauce, turkey at 1/15/2010 12:00:00 AM

I have to admit when I saw the title I was like "turkey BALLS? It's late, I'm tired and I have had wine. The lightbulb then went on. Oh that browned cheese looks devine!

I love a good meatball sub, great idea to use turkey. But you really had me at fried buns. You, sir, have now totally corrupted me. ;-)

Turkey balls.. I had to laugh at that title. My mind always wanders downward.

Oh my, that looks wonderful! Super idea to use turkey and I always brown up my buns! And the melted string cheese just adds to the delicious sandwich! Love that you can dump anything in there you like.

Meatball sandwiches are amazing. Like really really good. Especially when they have turkey in them because then you can eat more without feeling any guilt at all whatsoever. Browned cheese. Heavenly.

meatball sandwiches are soooo good! all that sauce, cheese and great lookinG!

I was really liking this sandwich but then you showed the burnt cheese puddle and it REALLY did it for me. It's over the top Bob, I'm drooling!

oh my gosh crispy cheese. yeah, that about sums it up for me dude.

This looks like a really good sandwich - the cheese looks great!

What a delicious sandwich with turkey meatballs, perfect with the browned cheese, yum!

tamilyn: Heh, everyone else gets fun search result related hits, I figured I needed some too. ;)

Donna: Mmm, on soup is a great idea. Or chili. maybe cut into slices...

Angie: Can't ask for a better reaction than that! :D

Mmmm...I'm loving the cheese. The cheese is the kicker to this awesomely delicious sandwich.

That looks deliciously addicting and something I'd like to put my chompers around.

Bob, that looks so good!! I've never had turkey meatballs before. Ground turkey and chicken is something I always want to try, but my mom doesn't like it. Anyway, I think I would like mine with tomato sauce vs a gravy.

Fried buns and a cheese puddle? It doesn't get any better than that! I would put that browned cheese on a fried egg sandwich!

Looks pretty freaking tasty! I liked that you used soy sauce in the meatballs. Growing up my parents seasoned and marinated everything with soy sauce. It pretty much runs through my veins now.

Mmm...crispy cheese. I need to send my husband over to your place so he can learn how to cook. ;)

Cheese puddles? Fried buns? Turkey balls? PINCH me, I must be dreaming. This looks TOO GOOD.

Bob,
These turkey "balls" look terrific, even if the name is funny!

Mmm, my mouth is watering! Talk about the perfect hearty sandwich!

I'm so happy that you were able to incorporate my "burnt cheese puddle" into a fantastic sandwich like this! It looks awesome! :D

Oh This is delicious , I'm sure my kids would be very pleased if I made these for them , thanks for sharing !

looking the looks of this cheese on this turkey ball sandwich. Looks amazing! Could do with one of those right about now!