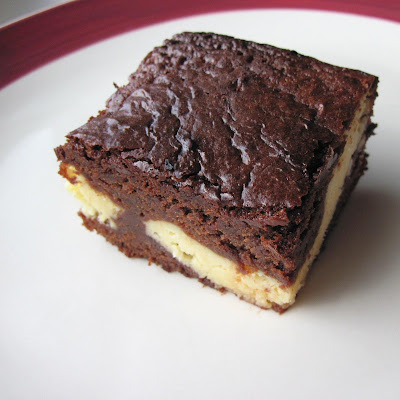 Preheat oven to 350. Prep an 8x8 pan with butter and flour or parchment paper. Process the filling ingredients in a food processor until smooth. Combine the flour, baking powder and salt in a small bowl. Melt the butter and chocolate together. Whisk in 1/4 cup of jam, let cool slightly. Add sugar, eggs and vanilla to the chocolate mixture, stir to combine. Whisk in flour until incorporated. Microwave the remaining jam until warm, stir so it's smooth. Pour half the batter into the prepared pan and smooth it out. Spread the cream cheese mixture in an even layer on it, spoon the jam on and swirl it with a knife. Pour the remaining batter on top and smooth it out. Bake for 50-60 minutes, until a toothpick comes out with a few crumbs. Cool for at least 2 hours.

This one comes from the folks at Cook's Illustrated. And I have to say, this is the closest I've come to being disappointed by one of their recipes. I mean, it was good, but it wasn't perfect. Which is really what I've come to expect from them. I don't think the jam in the brownies worked out as well as it could have, they came out a tiny bit gummy despite their assurances that it wouldn't. Now, it might have been that I used extra-dark chocolate instead of unsweetened, since I didn't have any, but I adjusted the sugar accordingly so that shouldn't have been an issue. Well, regardless, they were good. I wound up eating the whole pan myself since my girlfriend has determined the only way she likes cooked cream cheese is in cheesecake. A couple extra hours on the stair stepper and everything evened out. Heh. If my girlfriend had liked them I would even make them again, with a couple changes. But here is how I did it this time, almost straight out of CI.

First, I made my filling. Egg yolk, softened cream cheese, vanilla and sugar. 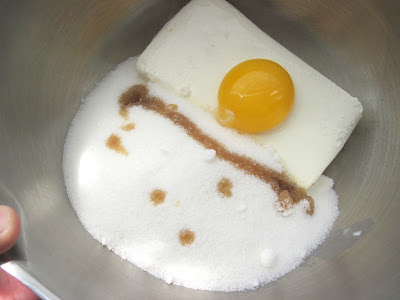 A certain amount of aggravation was had while I was making these and this was the first bit. Notice anything about that picture? Perhaps that it seems to be a little more than a quarter of a cup of sugar in there? Yeah. I added the brownie amount of sugar to the filling. I'm a clever guy. So I had to run out and get more cream cheese. Grumble. But I did and then I made it right. 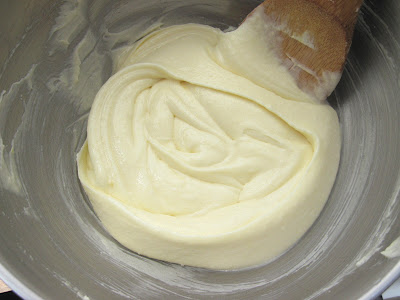 Next I mixed together the dry ingredients 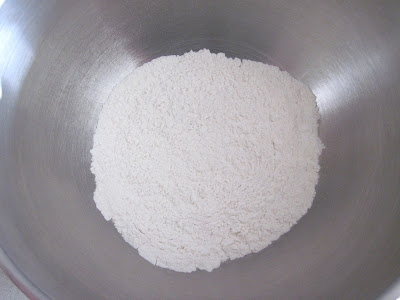 and this was my second but of aggravation. I thought I had a whole bunch of flour. I didn't. This time my girlfriend offered to go to the store, possibly to get away from my howls of rage and knife throwing. Ok, I wasn't really howling and throwing things, she was just being sweet. While she was gone I took the chocolate and butter 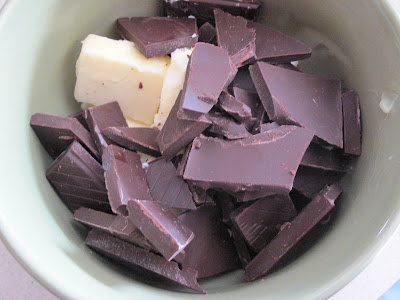 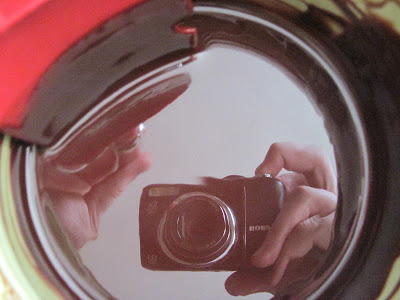 Shiny. Ever wonder what my new camera looks like? Heh. Then half the jam in there. 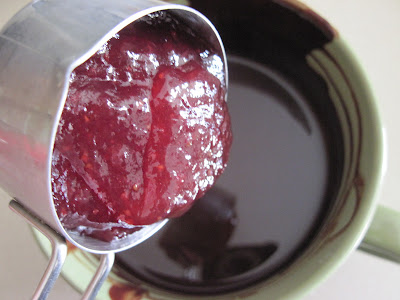 Then all of that went into a bowl with the sugar (the right amount, I double checked), eggs and vanilla. 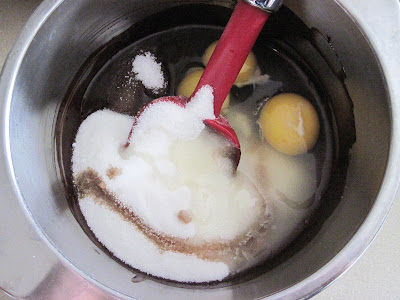 Stirred to combine, then the dry ingredients were added. 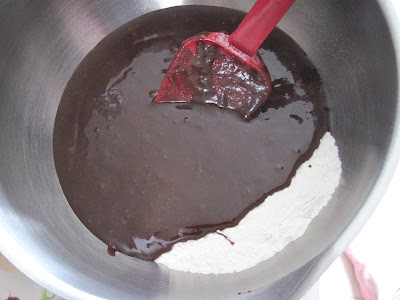 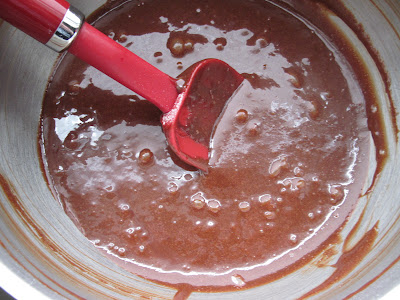 Then I poured half the batter into a parchment lined pan. 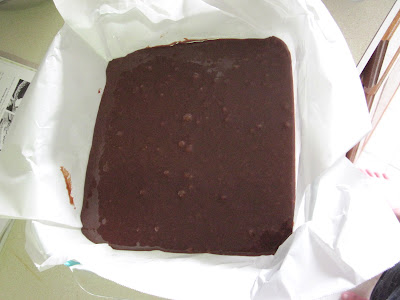 Then I spooned the filling on. 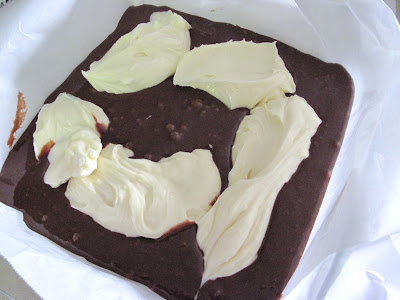 This was the last bit of frustration from this recipe. "Just spread the filling smooth" my ass. 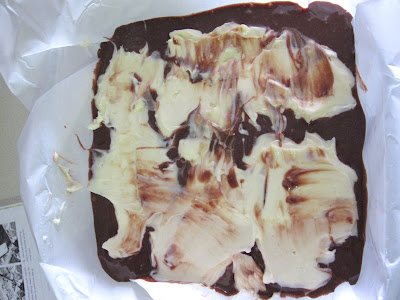 Ok, I didn't process the filling, that's true. But c'mon, I make cake batter by hand. The filling was very smooth and soft. The brownie batter seemed kind of thin though. Now, it's entirely possible that I made a mistake or two (that I didn't notice and fix, heh) and so it's my fault. These things happen and I admit it, but I could have sworn I did it right. It could also be that processing the filling was more important than I thought it was. Ah well, fortunately it didn't affect the flavor. Although I didn't bother swirling the jam in there, it wouldn't really have worked. Which was a shame. But anyway, then I poured the rest of the batter on, didn't take a picture and tossed it in the oven. After about an hour I took them out. 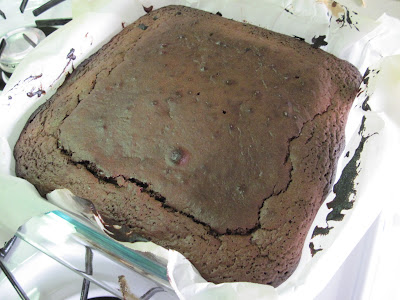 They also got a cool wave pattern since I couldn't smooth the filling out. So like I said, they were good. 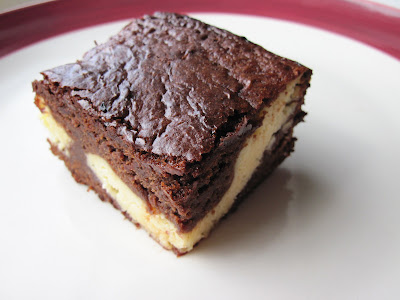 Not perfect, but good. If I were to make them again I would follow the recipe exactly and see what happened. I think it's much more likely that the filling issue was me instead of CI. They do test these things after all. Heh.


Email ThisBlogThis!Share to TwitterShare to FacebookShare to Pinterest
Posted by Bob Labels: baked goods, breakfast, cake, cheese, chocolate at 9/04/2009 11:22:00 AM

That's too bad about the gummy texture, but they do look really tasty. Maybe it would be better to add the jam to the cream cheese filling?

It looks pretty delicious to me. Very creative though adding strawberry puree.

Sounds interesting, Bob.
Haven't had any brownies in ages.

Wow, these brownies with strawberries and cream cheese sounds so yummie...like the idea of adding strawberries :-)

Use caramel next time. :)

I love the blow-by-blow description of the process and the honesty about the results. Thanks for showing us this.

Maybe if you used a tiny bit of jam in combination with some strawberry flavoring (or liqueur?)? Try spicebarn.com.

Shoot, they look delicious to me! Of course, I've never met a brownie that I didn't like ;)

Palidor: Yeah, that's what I'll probably do next time.

Dajana: Me neither. Almost two weeks I think. ;)

Duo: Heh, I bet I could spread that!

Goldie: I like the sound of strawberry liqueur! Heh.

Dawn: For real. No need to half-ass it.

Karen: Oh they were good, don't get me wrong. They just weren't all they were hyped up to be.

I like the flavors in them! They look really yummy! Sorry you weren't 100% satisfied.

Brownies are my thing. Pass 'em over!! (Don't forget the milk)

Hmmmm...Hmmmm...This is inspiring me to do something like this with my huckleberries...Hmmmmm.........

this is amazing. i want some.

mmm...those sound great! too bad they didn't come out as good as they should've. What if....instead of adding strawberry jam to the brownie...you added chopped fresh strawberries to the cream cheese?

These look fabulous, I think even with the gummy texture I could devour these!

Love the camera shot...love the brownies even more!!!

those look so delicious!, I love brownies.

I really like the idea of adding strawberry to the brownie - its not one I've seen before! The brownies looked so pretty with their white swirl :)

Starwberry and cream cheese and chocolate--oh lordy! By the way, I am also running the $10 stop & shop gift card giveaway on my site.

Great idea and an excellent flavor combination with strawberry, cream cheese, and chocolate. I'm sure next time the brownies will be all perfect.

K, not only do these look wicked good (to borrow a term from your book!), but I am loving that shot of your canera reflected in the chocolate!!

I guess even Cooks Illustrated isn't perfect. These sure look pretty though!

They sound delicious... Course I NEVER turn down a brownie... ;)

Oh, the step-by-step photos are mouth-watering! Thank you!!! Very creative twists, even if the texture wasn't ideal, they looks yummy!

Hey, I made them today and they came out awesome--I used raspberry jam, though, because that's what I wanted. I followed the directions except I used 3/4 cup of jam (1/4 in the brownies, 1/2 over the cream cheese filling, which I used my electric mixer to beat, and it was relatively spreadable--I think it just gets that air in there, you know?) and I used an 11x7 pan. So I think you'll have to try again. Maybe Thursday, you know, when we're there--heh. :-)

We just finished a pan of my mother-in-law's brownies but now I want more - with strawberries this time! Actually, when I read the title, I was expecting to see the strawberry part but I'm intrigued by it being mixed into the chocolate. This really looks delicious!

Even with all their testing, sometimes I get disappointed too. I think it's kind of weird they used jam in the brownie b/c you probably can't even taste it.