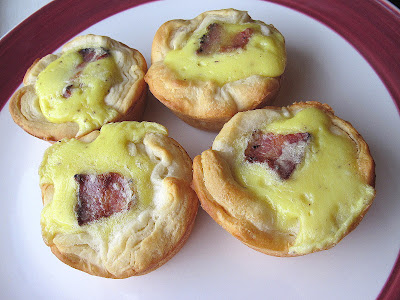 Preheat the oven to 375. Prep a muffin tin by spraying it with nonstick spray (or rub it down with butter). Open the biscuits and and separate each biscuit horizontally into two rounds. Gently pull or roll them until they are big enough to line the tin to the top and press them firmly into the muffin tin. Whisk together the eggs, salt, pepper and cream. Fill each cup about 3/4 of the way with the egg mixture and top with cheese and some bacon. Cook for 10-15 minutes, until the eggs are cooked all the way. If the biscuits start to get too brown around the edges cover the pan with foil.

Ok, I wasn't going to make these quite so soon but I really couldn't help myself. I was thinking about it all night last night and when I got up today it just had to happen. I had some concerns, mainly how the timing of egg vs biscuit would work, but it all turned out fine. In fact, more than fine. Phenomenal. As in "I'll give you my car if I can have the last one" kind of good. I ate six of them in about two seconds and still wanted more. But, I had to save the rest for my girlfriend or else she would harm me. And besides, those ones didn't have cheese, so they'll only be spectacular instead of phenomenal. This version is very simple, but you could put anything in the egg, provided you diced it small enough. Anything you would eat in an omelet would be awesome. But less talk, more rock.

First I cooked some bacon. 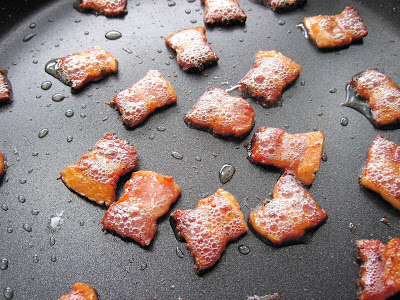 I believe my feelings on bacon are fairly well known to anyone who reads my blog. Then I cracked three eggs into a bowl and added some heavy cream, salt and pepper. 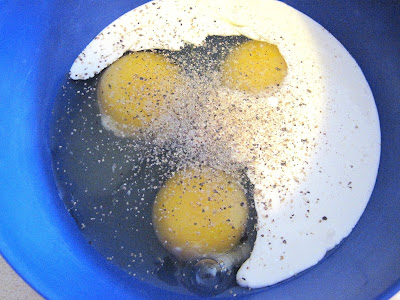 I had wanted to use milk, but we didn't have any. Tragic, isn't it? Mixed that up well and moved on to the biscuits. 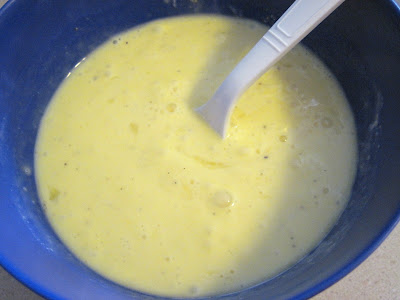 These are the ones I used. 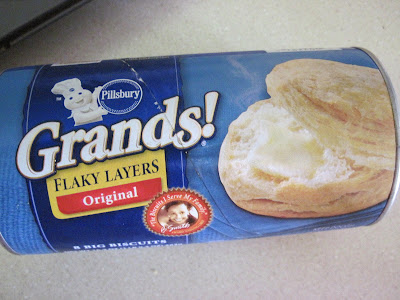 You can use any brand you like, but they need to be flaky and large. I'm sure you could use homemade too, but part of the thrill of these is the ease. Plus homemade aren't quite as pliable as the tubes of goo are. Now, if they aren't flaky you can't pull them in half horizontally like this. 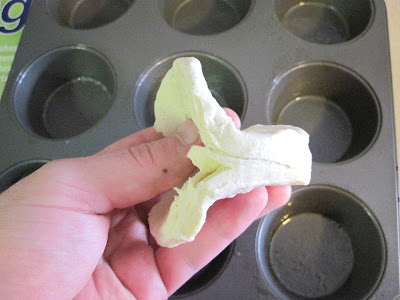 Which is important, if you don't do that then the cups will be too thick. You should also use two hands, it makes it much easier. Now you just pull them, a bit like pizza dough, till they are big enough to fill the muffin tins all the way to the top. It takes two hands and my girlfriend wasn't home, so I don't have pictures of that I'm afraid. You also want to be careful not to rip the dough, holes in the cups let the filling ooze out. Then you just fill the muffin tins. Like this. 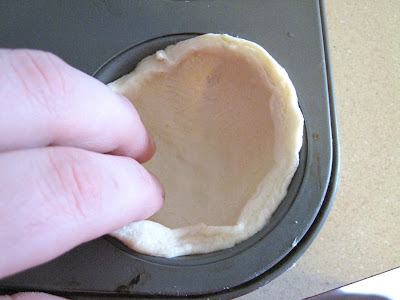 Press them in pretty firmly, don't be shy. It's pretty hard to hurt tube biscuits. 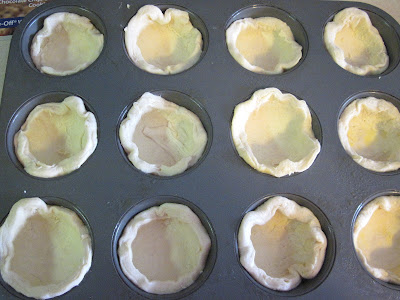 Then you fill each one about three quarters of the way with the egg mixture. 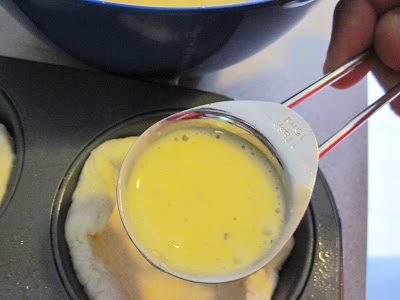 It took about one and a half tablespoons, I think. 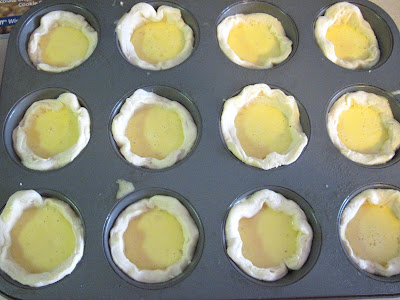 I would also like to point out that I guessed at how many eggs I would need and it came out exactly right. Score. Then you just put a little cheese on top 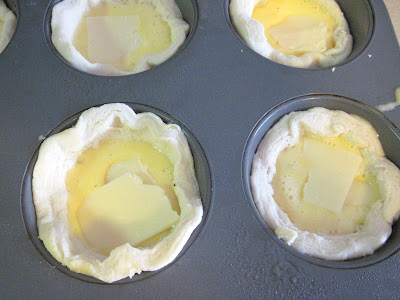 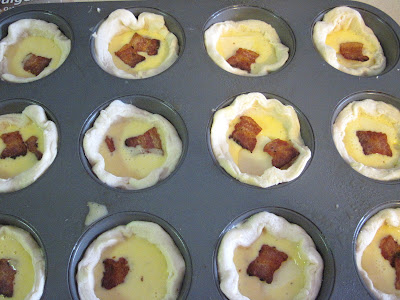 I like sharp cheddar with eggs, but you could use whatever you like. It's all good. Then it was into the oven for ten minutes. I pulled them out and the egg hadn't finished cooking, but the cups were already pretty brown. So I loosely covered them with foil and popped them back in for another couple minutes. Then they were done. 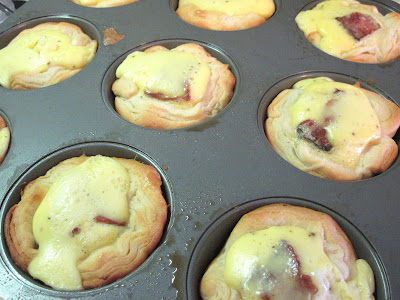 There was a little overflow, I think from when I covered them and stuck my thumb in one. 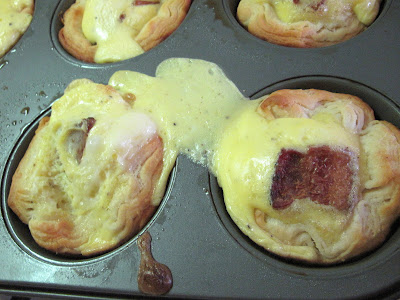 But whatever. Here's a cross section, for those who like that kind of thing. 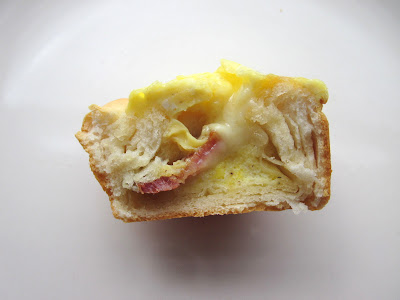 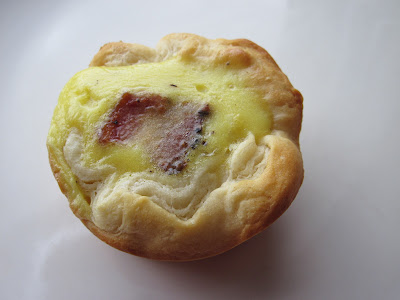 I would make them over and over. 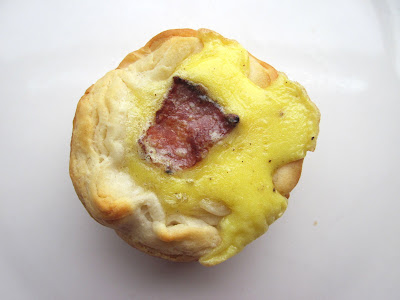 Next time I'm going to put some finely diced peppers and onions in, like a Western omelet. What would you put in them?


Email ThisBlogThis!Share to TwitterShare to FacebookShare to Pinterest
Posted by Bob Labels: bacon, biscuit, breakfast, cheese, eggs, snack at 9/18/2009 12:00:00 AM

Lovely looking and very tasty I'm sure.
I'd definitely stuff them with some veggies - pepper, zucchini

Oh, that's just SO tragic that you had to use whipping cream instead of milk. :-P They look awesome! I'd make them just like you did, but if I had some carmelized onions leftover from something, I'd add those. I love the contrast of the sweet onions and salty bacon! :)

Nice! The options are endless! I think I'm going to have to make some soon!!!

Oh, these are like those crazy little quiche things that they sell (used to sell?) at Panera for like $4 apiece! I'll take your version any day. They look Very Satisfying.

Hope your girlfriend refrained from harming you since you showed Great Restraint in not eating all of them!

these look great as is. I am loving goat cheese at the moment, but provolone also jumps start me.

I may save this and use some leftover pulled pork in them...excellent recipe, and thanks for the detailed photos

Beautiful! I want one right now!

I'm totally making these this weekend!

Your lovely gf was kind enough to share 2 of hers with me. YUM!!!

Oh yeah, and I would add cheese, and maybe some onion and mushrooms. Or maybe just a lot of cheese :)

I love baked eggs... these look really good. Would be nice for a crowd of people!

Bob, every time I visit your site, I find something good! I'm tempted again by the picture of your cocoa ripple ring in your header (I've yet to make it, although I printed it out to try soon) and now these egg cups. What a perfect dish when you have lots of company! Thank you for your comment on my site.

I wonder if you could go sweet, maybe add sugar to the eggs, kind of like Portuguese egg tarts...?

Dajana: If I had been feeling more patient I would have tossed some veggies in, I think a little shredded zucchini would be great!

girlichef: They totally are. Let me know how they turn out for you!

onlinepastrychef: Heh, she did show restraint. ;)

Year on the Grill: I did it with shredded chicken last time, it was awesome. Provolone would be a good time, goes great with egg.

5 Star Foodie: Let me know how you like them!

Kaje: If I had known you were going to get some I would have left you some with the cheddar. It was awesome.

Karen: Yeah, they would be good party food.

Joie: Heh, thanks. :) If you try the cocoa ripple ring you should add some vanilla, I'm told. It got some rather negative feedback from another blogger who made it. :/

Vicki: Ooo, sugar, vanilla and cinnamon! Crap, I need to write that down.

omg...how yummy are those!!! seriously. Maybe I could make them for christmas morning..quick eats, easy breakfast. You know what I would do? pour hollandaise sauce over them!

These look so awesome! I love cheddar with my eggs too - and they looks so flaky. Heaven.

What a great breakfast concept! I love the idea of a Western-style omelet biscuit cup. Really the possibilities are endless as far as different meats, cheeses, and veggies!

Yum! I love the idea of using biscuits as little shells for, well, whatever. Cute for a brunch & a good timesaver.

P.S. I think it was you who knew Iron Maiden (and their names lol). I happened to wait on the drummer from Aerosmith a couple of weeks ago... : )

Man, I wish I was your neighbor...

Oh, great. I'm going to wake up in the middle of the night thinking about these too. The problem is that I live in a country where you can't buy canned biscuits or cheddar cheese. NOW what am I going to do??

Biscuits in a tube... Yet another American delicacy never even heard of in the back of beyond, like Finland... I love reading food blogs, you and Pioneer Woman are my favourites, but you often use ingredients not available here, so I can't try many of the neatest recipes.

But I have actually made tiny pie cups just like these, using butter pastry dough: equal weights butter, wheat flour, quark/curd cheese, some salt and baking powder, just mix together and roll out or press with fingers to a suitable thickness into a pie dish or, as here, muffin dish.

I fill them most often with feta cheese and spinach, or smoked ham and tiny florets of broccoli. And cheese, eggs and cream, of course. Sadly, not many of those who eat my pies are into bacon. I may have to make a batch just for myself. : )

Forgot to mention one variation on the theme. Instead of canned biscuits I could buy frozen puff pastry sheets, thaw them out and use them as muffin dish liners. Frozen puff pastry tends to taste like cardboard, but bacon and cheese make even that palatable.

I actually have some puff pastry in the freezer. I may have to get it out and start baking.

Danielle: OMG, I'm coming over for Christmas! Hollandaise would be the bomb with these.

Reeni: There's just something about cheddar and eggs, isn't there?

Meghan: Thanks! That's so true.

Caitlin: Heh, that was me. That's awesome!

Goldie: You could come roust out the douche bag we have next door if you want. ;)

Kate: ...no cheddar? How do you survive? I mean, biscuits in a can are no huge loss, but cheddar is awesome. I guess you'll just have to settle for all those fabulous Euro cheeses. How tragic for you. :)

Annukka: Wow, thanks. I don't think I've ever been in the same sentence as PW before. I have to admit, hers is the blog that really inspired me to start my own.

Heh, puff pastry would be a perfectly workable substitution for biscuit dough. Or pie crust would be good. Maybe even very thin bread dough...

I love you Bob. Okay, a little extreme, but these look like the perfect snack I need for a party! Who doesn't like eggs, cheese, bread and bacon? I bet they would be good with diced ham too.....ooooo, have to try these soon!

Cool story as for me. It would be great to read a bit more about that theme. Thnx for posting this information.
Sexy Lady
Blonde escort

I just made a version of these this morning. Turned out great! Thanks!